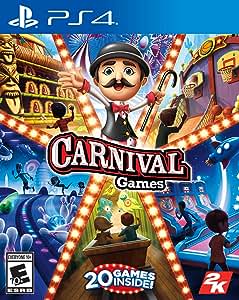 by 2K
Platform : PlayStation 4
In stock.
International product from outside Singapore
Ships from and sold by Amazon US.

Carnival Games brings the party back for the entire family! With both fan-favorite and brand-new mini-games all in one package, Carnival Games offers fun for everyone and can be played alone or with up to three others. Hit home runs, pile the highest stack of cakes, and take your horse to the finish line. 20 total mini-games will have you and your friends stepping right up to win again and again!

Carnival Games brings the party back for the entire family! With both fan-favorite and brand-new mini-games all in one package, Carnival Games offers fun for everyone and can be played alone or with up to three others. Hit home runs, pile the highest stack of cakes, and take your horse to the finish line. 20 total mini-games will have you and your friends stepping right up to win again and again!

S.W.
4.0 out of 5 starsfun & family-friendly; just don't pay too much for it or expect too much from it!
16 May 2019 - Published on Amazon.com
Platform for Display: PlayStation 4Verified Purchase
As you probably already know, this is a collection of mini-games. Up to four people can play; unless there are four people, there will always be at least one AI-controlled character, as all of the games always have four participants. The only person that I've played the game with is my older bro, so our experiences with the games are the only ones I can write about. (I played on my own for a while the first time we played.)
There really isn't much to any of the games, but they are fun and often kind of silly (in a good way!). Some of them are realistic, like ones you would probably find at an actual carnival, while others are more wacky. However, most of the games are locked at first, and you unlock (or "buy," or "open," or whatever) them by earning tickets from playing games that are open or that have been opened. There are 20 games altogether, of which only like 8 are playable at first. The games are divided into "groups" of five as though they are in four different-themed "sections" of the carnival (I think two games are open in each section to start with).
As I said, I've only played with one other person, so I can only tell you what WE experienced; other peoples' experiences may differ. It seems to us that AI characters are better or worse at some games than at others. At certain games, one of us usually won, while the AI seemed much better than us at other ones. But whether one of us won or not, the games were still fun and entertaining!
It may seem (as it did to us at first) a drag that almost all of the games are locked to begin with, but we found that there were certain games (ones that are open from the start and ones that we unlocked) at which it didn't seem too hard to get a lot of tickets to open other games; it only took us two play sessions (a long, about-two-hour one and a much shorter one) to open all of them. In fact, one of the games you can play from the start, the baseball-hitting game, is one of the easiest ones, if not THE easiest one, to win and at which to rack up tickets! Unless EVERY human player is REALLY bad at this one, none of the AI characters have a chance! (At least, that's how it seems to my bro and me.) If *I* could win at it as soundly as I did while playing one-player, then I'd think just about ANY human would gave a good chance of winning at it ANY time!
You can also use tickets to buy other stuff, like music tracks (I'm not sure how these work, as none have been bought by me or my bro; I don't know if they ever will be) and certain clothing options for your customized characters (if you've made any, that is).
Which brings me around to the character customization feature. At the beginning, there are just a few options open for body type, skin color, face, eye color, hair, hair color, shirts, and bottoms (at least that's how it was with the "adult male" characters that my bro and I created). All of the options you can buy (to begin with, anyway) are silly "novelty"-type ones that I really don't think you can't live without (again, that has been my and my bro's experience with our custom characters). At any rate, I guess it's kinda cool that you can have custom characters.
Overall, I like this game, or rather, this collection of games, even if there isn't a whole lot to it (or to THEM). It's family-friendly, so anyone can play, though it can become kind of repetitive before too long. Just don't pay too much for it or expect too much from it, and I think you'll enjoy it. I'd say it was worth getting for under $30, and is proof that a video game doesn't have to be filled with violence, blood, profanity, suggestive themes, scantily-clad females, or whatever else that would net it an 'M' rating in order for adults to have a good time with it!
Read more
20 people found this helpful.

ethans mom
5.0 out of 5 starsFamily Fun
22 January 2019 - Published on Amazon.com
Platform for Display: PlayStation 4Verified Purchase
For the last couple months we have played it at least once a week and it hasn't gotten old yet. Good family fun and competition.
Read more
9 people found this helpful.

CaptainCraboo
5.0 out of 5 starsPerfect for kids
11 November 2019 - Published on Amazon.com
Platform for Display: PlayStation 4Verified Purchase
Bought for my 1st and 2nd grader, they love it. Hours of good, clean, fun.
Even the adults enjoyed playing. Could not recommended higher.
Read more
4 people found this helpful.

M.G.
5.0 out of 5 starsSo fun!
6 October 2019 - Published on Amazon.com
Platform for Display: PlayStation 4Verified Purchase
This is wicked fun and has so many games! You can play multiplayer or alone. There is enough content to keep it challenging and fun for a long time. We really are enjoying this game.
Read more
3 people found this helpful.
Go to Amazon.com to see all 66 reviews 4.4 out of 5 stars

Platform For Display: PlayStation 4
Free & fast delivery, movies and more with Amazon Prime
Prime members enjoy free & fast delivery, exclusive access to movies, TV shows, games, and more.
> Get started
Back to top
Get to Know Us
Connect with Us
Make Money with Us
Let Us Help You
© 1996-2020, Amazon.com, Inc. or its affiliates