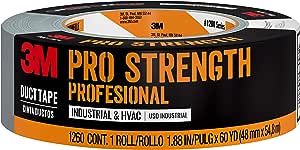 by 3M
4.2 out of 5 stars 110 ratings
International product from outside Singapore

Designed with the professional in mind, 3M PRO STRENGTH Duct Tape is your go-to solution for general and HVAC repairs at the jobsite and in your home. Thanks to the power of 3M Science, this heavy-duty tape withstands lengthwise and crosswise stress, and is suitable for indoor and outdoor applications. The strong adhesive is great for wrapping pipe insulation, hanging protective sheeting and general repairing and patching. Versatility is essential when you're on the job–so reach for 3M PRO STRENGTH Duct Tape for fast, easy, reliable repairs.

Timothy Dorsey
5.0 out of 5 starsSerge Storms asked me to post this
9 January 2013 - Published on Amazon.com
﻿I'm here to say that duct tape isn't just for ducts anymore. I could not survive without it. I can't say enough about duct tape. One of the earliest versions was developed in 1942 by the good people at Revolite (according to Wikipedia, so who freakin' knows?), and later used extensively by the military and NASA. It even helped save the Apollo 13 crew (wow!) I like duct tape for its sound-proofing qualities when concentration and stealth are a priority. But don't go cheap as the shoddier brands can easily be loosened with the tongue. In the home improvement universe, duct tape is Sgt Pepper's, Citizen Kane and The Great Gatsby all wrapped into one. If I could, I'd give this review a hundred stars, but The Man has boxed me in at five. So in conclusion, even if you don't need duct tape, buy a roll today, "invite" some people over to your motel room, let your imagination run amok and surprise yourself!
- Serge A. Storms
Read more
695 people found this helpful.

Metabble
4.0 out of 5 starsDecent duct tape
1 August 2019 - Published on Amazon.com
Verified Purchase
This is decent duct tape. The adhesive seems a little stronger than the tape so you have to be careful when unrolling or adjusting it prior to application. The tape will stretch and deform slightly before it rips. If ripping is intended, pull firmly and quickly to reduce this effect. I prefer to cut this tape if I need exact edges.
Read more
One person found this helpful.

Prolific Reader
5.0 out of 5 starsGreat duct tape
23 September 2013 - Published on Amazon.com
Verified Purchase
I bought this tape several months ago and have used it for several repairs. It adheres to just about anything you want to use it on. I used it to tape foam pipe wrapping around the trunks of some small dogwood trees in my yard in the early spring as a neighbor had apparently turned a pet domestic rabbit loose in the neighborhood and he loved my garden. After he ate the blossoms off of most of my flowers, he started stripping the bark from my dogwood trees. I taped foam pipe wrap around the trunks and just removed it a week or so ago. The tape held tight all of this time to the foam and I had to cut it to remove it. Most recently I used it to repair a trim piece on my house siding and was able to paint over it with one coat of paint. It worked well for this and looks good enough that only if you get right against it, can you see that I used something to repair the piece of trim. I recommend this tape as it is the best duct tape I have ever used.
Read more
One person found this helpful.

Karl Vacek
1.0 out of 5 starsJust cheap duct tape for a higher price
11 November 2019 - Published on Amazon.com
Verified Purchase
Cheap junk - big box store quality. I expected more from one of 3M's upscale tapes. When tearing across (way too easy may I add) it likes to tear down the roll making two narrower strips rather than just tearing across. No evidence of a thick clear poly layer on top. Thin, chintzy. Not high quality.
Read more

Douglas C. Meeks
5.0 out of 5 starsAbout The Best I Have Found
21 November 2012 - Published on Amazon.com
Verified Purchase
There is a difference between the many brands/types of duct tape. This one is an exceptionally strong and tear resistant version. I use this tape to seal boxes of heavier objects that I mail to persons through the APO system which tends to be stressful on such packages to say the least. I have never had one of these seams that I taped down with this duct tape come open. There have been a couple of instances where the box burst but not the tape, be warned this is more adhesive than most and come off the roll with a bit more effort than the cheaper brands/types and you need scissors to cut it, it is good strong stuff and I can't recommend it highly enough for those jobs where you want this kind of bonding and strength.
Read more
4 people found this helpful.
Go to Amazon.com to see all 102 reviews 3.5 out of 5 stars
Free & fast delivery, movies and more with Amazon Prime
Prime members enjoy free & fast delivery, exclusive access to movies, TV shows, games, and more.
> Get started
Back to top
Get to Know Us
Connect with Us
Make Money with Us
Let Us Help You
© 1996-2020, Amazon.com, Inc. or its affiliates