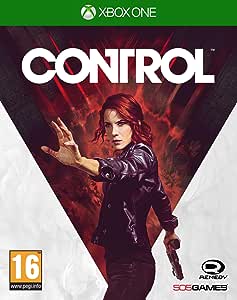 The game revolves around the Federal Bureau of Control (FBC), a secret U.S. government agency tasked with containing and studying phenomena which violate the laws of reality.

Sean
5.0 out of 5 starsSuper creepy story and atmosphere
22 March 2020 - Published on Amazon.com
This is one of the best horror themed games I've played in a long time. Alan Wake was very good, so was the Suffering and Half-Life on the 360, but this game is far beyond either. If you only play it for a few hours and never make past the Central Executive, you'll wonder what all the fuss is about. Once you get your Launch ability, the game starts getting good. You'll be able to rip off sections of the wall and surrounding structures and use them as projectiles. Build this ability up to its' max first, you'll need it.

The game can be frustrating. I set it aside once I got past the Central Executive as I was frustrated with my lack of ability to get further. You do have to stop and think and pay attention to what the characters are talking about. It's all part of pulling you into the story. It does get tough, again max out your launch ability, I can't stress this enough. If you don't, you'll quite in frustration. You'll be killed in seconds on the later levels without it at full power; especially the Bosses... I was stuck many times. It is not always clear what to do next, but if you stay with it you won't be disappointed.

I was a huge fan of the creepy atmosphere, the Thresholds Kids videos were great; creepy as hell as were the rest of the videos. The whole vibe of the game is super creepy, which is great. It's part Half-Life, part Suffering, part Alan Wake (atmosphere). Once you get to the Research and Containment levels and eventually get your Levitate ability, it's worth it. The Ashtray Maze is one of the best pieces of game play I've played through ever, in my opinion. It's that good. At the same time, the final Boss is tough....but don't let that discourage anyone from buying this if you love horror themed gaming. This game took several months of on again and off again play to finish. There's no way a rental could do it justice.

The only thing that I wish this game had was a difficulty setting. I wish I had the ability to dial down the difficulty in the later sections. I would have done so for sure. It's frustrating in that you'll want to get further to see more of the story, but not be able to due to difficulty. It has a really great story which kept me coming back, despite the difficulty...

Clint F.
3.0 out of 5 starsConfusing, jumbled mess.
19 March 2020 - Published on Amazon.com
I have to say that I'm surprised at how well this game has been reviewed. I'm only a few hours in, but I found this game to be a confused, jumbled mess. The map is next to useless and doesn't help you at all, and you just keep going back to the same areas over and over again, but they decide to unlock doors for you as the game progresses. Most of the time you will run around lost, with no idea where to go, and occasionally get to use your cool powers. It's decent, but not something I'd purchase if I could go back.
Read more
Go to Amazon.com to see all 2 reviews 4.0 out of 5 stars
Free & fast delivery, movies and more with Amazon Prime
Prime members enjoy free & fast delivery, exclusive access to movies, TV shows, games, and more.
> Get started
Back to top
Get to Know Us
Connect with Us
Make Money with Us
Let Us Help You
© 1996-2020, Amazon.com, Inc. or its affiliates