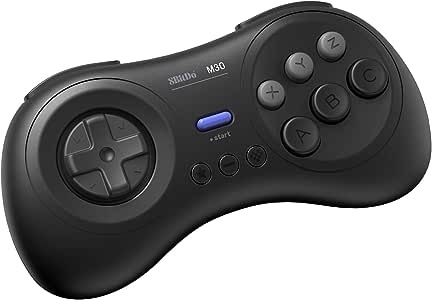 Fastest delivery: 15 - 19 Aug. Details
Ships from and sold by AKNES-SG, from outside Singapore. For information about products sold by international sellers, click here.
4 new from S$37.99

Anita L.
5.0 out of 5 starsYOU CAN SWAP A->B and D-PAD BEHAVIOR
5 March 2019 - Published on Amazon.com
Verified Purchase
Here's how you swap buttons and change what stick/d-pad the d-pad counts as

This isn't in the manual for some weird reason, but is extremely helpful.

As for the controller itself, it's great, the d-pad is wonderful, buttons feel nice, no complaints now that we know how to swap buttons and stuff. Now A/B/X/Y do the same thing as the pro controller, Z=L, C=R, L=ZL, R=ZR, this stays even after swapping buttons

Kevin Bender
4.0 out of 5 starsVery Solid Controller, but Not Perfect
1 March 2019 - Published on Amazon.com
Verified Purchase
First off, I want to start by saying that the 8BitDo M30 Bluetooth Gamepad feels great and performs very well. If you want a solid alternative to an actual Sega controller, and you want an excellent d-pad for fighting games and/or retro games, then consider this your go-to controller in that regard. Expect some problems along the way, though.

First, I tested this game on Switch. I love the built-in menu for testing controllers on Switch, so I went that route first, due to how accurately you can assess the quality of a d-pad with that menu. Alas, none of the d-pad presses registered in the test menu, leading me to believe that the d-pad emulates the left analog stick, instead. Next, I wanted to test it with some fighting games, so I tried both Samurai Shodown and King of Fighters 2003, and the d-pad performed admirably on both tests, with any botched move commands likely the fault of myself (as I'm not used to the stricter input requirements typical of SNK games).

I decided to perform one final test on Switch, mostly to confirm my assumption about the d-pad emulating the left analog stick, rather than the directional buttons on other Switch controllers. I chose Tetris 99 for this task, since you control tetrominos with the directional buttons on other Switch controllers and use the left analog stick to target specific opponents. Alas, as I assumed would happen, the d-pad on the 8BitDo M30 did nothing more than target opponents, leaving me unable to control the placement or descent speed of my tetrominos.

UPDATE: Apparently, you can change the d-pad's function! Thanks to Anita L. (whose review appears on this page) for this info! By holding the - (Minus) button and Up, Left or Right on the d-pad for five seconds, you can change what the d-pad does. Up make the d-pad act as a d-pad, while Left and Right make the d-pad act as a left or right analog stick. This means that Tetris 99 is at least playable with this controller, even if you can't easily target opponents anymore. WHY WASN'T THIS IN THE MANUAL?!

People more familiar with Nintendo's controller layouts should consider the fact that Sega's controllers' button layouts tend to clash with those of Nintendo's controllers. As such, you should expect some confusion surrounding the button labels and their actual functions. For example, A and B on the 8BitDo M30 act as the respective B and A buttons on other Switch controllers, with X and Y similarly reversed. C and Z act as R and L, with L and R acting as ZL and RL. The + Start and - (Minus) buttons at least match their Switch controller counterparts, with the Star and Heart buttons acting as Capture and Home respectively.

UPDATE: Similar to the above d-pad trick, you can change the functions of the A/B/X/Y buttons to match their Switch counterparts by holding the - (Minus) button and Down on the d-pad for five seconds. To change it back, just do it again.

As I mentioned before, I'm not so great at SNK fighting games, so I decided to test the 8BitDo M30 with Ultra Street Fighter IV on PC via Steam. I couldn't begin to imagine the difficulty I'd have in getting this controller to work.

For some reason, Microsoft seems to have recently 'implemented' mouse cursor control in XInput controllers, toggled on and off by pressing the Start button on whatever XInput controller you happen to be using. I use the word 'implemented' loosely, as I suspect that the manner in which I experienced this 'feature' was unintended. Basically, I found that the 8BitDo M30's d-pad would occasionally move my mouse pointer around. Eventually, I came to the realization that the 8BitDo M30's Start button was toggling this 'feature' on and off. Terrible.

I seem to have found a fix for this issue. Note that I'd previously made sure that the desktop controller configuration through Steam was properly dealt with, which led me to realize that this was, in fact, a Windows 10 issue. To fix this issue, try doing the following:

2) In Device Manager, expand the Human Interface Devices section by clicking on the > symbol to the left of that section.

4) Make sure your 8BitDo M30 is turned on and connected to your PC via Bluetooth.

7) Once your computer has restarted and you're logged into Windows 10, go to Device Manager again, then to the Human Interfaces Device to locate the 'Bluetooth XINPUT compatible input device' one more time. Right-click it and choose 'Enable device' to re-enable it.

8) Turn on your 8BitDo M30 (as it likely turned off automatically when you restarted your PC).

You should notice that the Start button on your 8BitDo M30 no longer toggles mouse control on and off.

So, I tested the controller with Ultra Street Fighter IV, and it performed beautifully. Not a single botched move command. I couldn't be more pleased.

Overall, I highly recommend the 8BitDo M30 for people who prefer Sega controller layouts or just want a solid controller with six action buttons on the face of the controller. It's a bit of a shame that the experience falls so short of perfection when other controllers manage to offer a more streamlined experience, but it's worth the extra work, in my opinion.
Read more
48 people found this helpful.

The ergonomics are great, and dare I say, better than the 6-button Genesis pad by a long shot. It just fits well in the hands. 6 face buttons, 2 shoulder buttons, and 2 extra buttons that function as a select and home button, all come together to make for a controller that works well with just about any retro game out there. It also has a turbo button. The d-pad is every bit as good as the original d-pad (so far...time will tell how durable it is). It is very accurate, and doesn't feel at all uncomfortable to use. I had no issues pulling off various combos and specials in fighting games with this. The buttons are all responsive, as well. The top row of face buttons do have a slight wiggle, but it is so slight, it is never noticeable while playing. The shoulder buttons also are very comfortable to use, and give the controller extra buttons to work with, making it a versatile controller that can work well with SNES, Saturn, and PlayStation games.

As described, the controller has Bluetooth connectivity, though you can plug in a USB Type-C cable to play with a wired connection (I'd suggest getting a longer cable, as the included one isn't very long). Wired or wireless, latency is not an issue at all, and I had no problem connecting it to any Bluetooth device. The connection is also very stable. While I haven't tested battery life, 8BitDo advertises 18 hours of continuous play. Having used their SF30 Pro controller, I don't doubt that's accurate, as that gave me roughly 14 hours. The controller works on a nice assortment of consoles, with modes you can toggle by holding a button while turning the controller on. It will connect in XInput, DInput, Mac, and Switch modes. Yep, this works on Switch. With a bit of a caveat. For those wanting to use this with the Genesis Collection, unfortunately, the controls are layed out in a way that is inaccurate to the original Genesis controls, and there isn't an option to remap. That's not a fault of the controller, but the collection itself, though. And the controller is designed in conjunction with the Retro Receiver, and even properly maps the buttons to the Sega Genesis controls, with the L and R buttons mapping themselves to act as extra Z and C buttons, respectively.

But all in all, this controller is easily worth the purchase. For those looking for a good controller to use with RetroPie, Lakka, RetroArch, etc, this is perfect. If you were on the fence, I can assure you to climb over. It's a great controller.
Read more
16 people found this helpful.
Go to Amazon.com to see all 171 reviews 4.2 out of 5 stars
Free & fast delivery, movies and more with Amazon Prime
Prime members enjoy free & fast delivery, exclusive access to movies, TV shows, games, and more.
> Get started
Back to top
Get to Know Us
Connect with Us
Make Money with Us
Let Us Help You
© 1996-2020, Amazon.com, Inc. or its affiliates