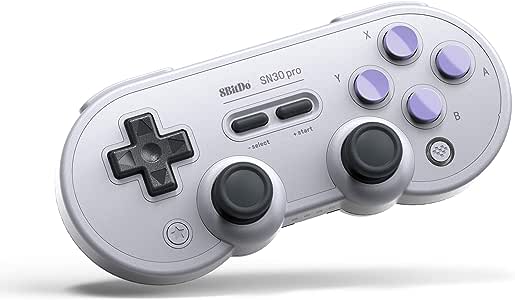 The One Controller to rule them all. Inspired by the classic Super Nintendo. Fully featured Controller- clickable joysticks, rumble vibration, motion controls, wireless Bluetooth, rechargeable battery, home and screenshot Buttons and a USB-C connector!. Perfect classic d-pad. Compatibility Windows 7 and above Bluetooth 4.0, Android 4.0 and above macOS 10.7 and above, Switch 1.0.0 and above.

Chris B.
4.0 out of 5 starsPretty good controller with a couple minor nitpicks
25 September 2018 - Published on Amazon.com
Verified Purchase
Alright, so this review is for the original Game Boy colored one, but it shouldn't matter much other than the d-pad having a slightly different texture. I've used it on PC (wired and wireless), Switch (wireless), and Android (wireless) and it has pretty much worked flawlessly. Just keep in mind you will need a Bluetooth antenna/module on any device you want to use it on (Switch and most Android phones have them built in) and also I didn't see iPhone listed, so it may not work on it at all.

Unfortunately it does not work while wired on Switch, though it will charge the controller while plugged in, and it does use USB-C, which is a massive improvement over 8Bitdo's older generation of controllers which used micro USB. You basically just follow the instructions to connect it to each system, and once it's hooked up you can charge it and just use it normally until you need to switch again, at which point you'll have to follow the instructions for whatever target platform you're switching it to. For the most part this consists of either pressing a face button and start and then the pair button for wireless, or pressing a button and start and plugging it in for wired on Windows or Mac OS.

The controller itself works a lot better than I expected, and I was worried that, having fairly large hands, the sticks would get in the way of the buttons and vice-versa. For me at least, this isn't an issue. I played Mega Man, Monster Hunter World, Xenoblade 2, Octopath Traveler, Monster Hunter Generations Ultimate, Fire Emblem Warriors, the Capcom Beat 'em Up Bundle, and the Nintendo Online NES games with it so far. All of them have worked better than I thought. There is one sticking point for me though. I feel the L1/R1 (upper set of bumpers on top) stick out a bit too much and are a bit too small. If that were fixed to be a bit more ergonomic I think this thing would be perfect. It would probably mean a chunkier controller but IMO that isn't a bad thing, this is already thicker than a SNES pad is (compared with my originals) and it feels better to me honestly in that it has more to hold onto. A version with a handle is coming out in a few months, maybe that will feel a bit better, but for now this controller is pretty solid in my opinion. Battery life has been holding up fine for me though I couldn't provide an exact number of hours. It's worth mentioning this thing has rumble (normal kind, not "HD"), gyro functionality (for motion aiming in things like Splatoon, though I haven't tested it and I am not sure if this can even be accessed on PC but would be neat if so), and screenshot/home buttons. It has everything on a Switch controller you might want other than NFC and the HD rumble, but honestly that's good enough in my opinion.

Pretty solid controller overall, definitely better than I expected. It doesn't exactly look like it would be the most comfortable controller in the world, but it actually feels pretty good. Well worth the price and consideration over the "NES-cons" for the NES Online service that are only officially confirmed to work on that one game and don't even work while attached. This is the real deal, and it doesn't have those awful sharp corners.

8bitdo's support team has been in constant communication with me the past week and has had me try the newest firmware update since the below issue was reported. I'm happy to confirm that the newest firmware, v1.29, fully resolved the issue. Buy this controller with confidence that you're getting a quality product with a great support team behind it. 8bitdo's controllers have just reclaimed their status as my #1 favorite. Just make sure you update the firmware when you get it!

****I'm leaving my previous review here for reference:
These controllers look and feel great, but that's pretty much where the positives stop.

When using the older revision of this with the color scheme that's closer to an actual SNES controller recently I encountered an issue with it and I wanted to know if this new model has the same problem, so I bought one. Unfortunately I can confirm that the problem, detailed below, still occurs even with these new revisions.

This problem became apparent to me when playing Mega Man X4 in Mega Man X Legacy Collection on Nintendo Switch: I noticed that when I hold Y, B, and A, then press right on the Dpad, the X button will activate without being touched. There are other button combinations that cause phantom button presses or misfires, as well (listed below). I've had two of the older more accurate looking SNES style versions of this controller, and this one just arrived today. They are all affected in the same manner. 8bitdo's support has been contacted on the issue, but no information has been provided on whether or not this is a hardware or firmware issue, and no resolution has been offered other than that they are looking into it.

Nick
4.0 out of 5 starsReally good, but buttons a tad stiff
5 October 2018 - Published on Amazon.com
Verified Purchase
I got this controller primarily to use with Switch games that benefit from a solid d-pad. While I love the Switch Pro controller, the d-pad is not very accurate and it's entirely too easy to trigger a down or up press while pressing left or right. This is really problematic for games like Hollow Knight where that up or down press changes the direction of my attack and can really mess up combat.

This controller does not have that problem. The d-pad is much more accurate, so I don't find myself pressing the wrong direction accidentally. It is a little small by comparison to the Pro controller, but it's basically the same size as an original SNES controller (for better or worse, see below). If I had one minor complaint, it's that the buttons are a little stiff right out of the box. I suspect they will break in over time and get a little mushier and easier to press, but just keep that in mind. (The stiffness is why I gave it 4 stars)

In terms of ergonomics, the smaller size (by modern controller standards) might be a bit of an issue for some. I have fairly large hands and I do notice a bit of cramping depending on how I am holding the controller, so just keep that in mind. Having said that, I do think that can be mitigated by holding it a bit differently. Also, I initially thought the right thumbstick was too close to the face buttons and might get bumped during play, but I have not found that to be a problem in practice so far.

Overall, I highly recommend this controller.
Read more
18 people found this helpful.
Go to Amazon.com to see all 292 reviews 4.5 out of 5 stars
Free & fast delivery, movies and more with Amazon Prime
Prime members enjoy free & fast delivery, exclusive access to movies, TV shows, games, and more.
> Get started
Back to top
Get to Know Us
Connect with Us
Make Money with Us
Let Us Help You
© 1996-2020, Amazon.com, Inc. or its affiliates