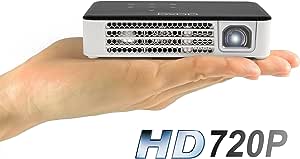 The P300 Neo maintains the blockbuster brightness of its precursor P300 while reducing size and weight by more than 40%. The P300 Neo is an ultra-compact small projector measuring just 5.4" x 3.4" x 1.18" which is about the size of two smartphones stacked together.

Perfect for Business and Leisure

A.C.A.
3.0 out of 5 stars Nice little projector full of annoying little issues
6 December 2017 - Published on Amazon.com
Verified Purchase
I have had this little projector for over a month.
PROs
It is compact, when it works well, it works mostly very well.
The speaker is "nahhh" but you don't expect great speakers in projectors. It does its job well.
It has batteries although they don't last much unless you have the light source in Eco.
It isn't heavy and mostly delivers.
CONS
1. At least mine has some issues connecting correcly to the cable box. The image is fine, but sound works sometimes, and some other times it does not. The same HDMI source, when used on my old OPTOMA HD projector or on my LED TV always works fine. So the issue is the projector. I took the time of writing to AAXA before writing this review. We exchanged emails with a nice guy called Michael. Most of the time he tried to explain how everything worked and the problem was just mine. After going back and forth 9 times, I finally gave up. He was very nice to apologize but then again, he said that there must be a compatibility issue between my Cable box and the unit (again, the problem was mine and not the unit's). As I explained to him in my last email before giving up, I get sound, another days I don't...on, off...if it is incompatible, it just does not work since the software cannot "work out issues" (it is not a programmer, it is just a program), so it will not work out what is wrong. If it works sometimes, and sometimes it does not (while everywhere else the connection is always fine), then it is either an issue with the HDMI imput or with the projector's software. That's it. So we agreed to disagree.
2. Other annoying little issues:
a. I put the lamp in BOOST mode, and the projector, on its own, brings back brightness to Standard within 10 minutes. It will just not stay on BOOST (brightest)
b. Focus is very annoying. It is just a short wheel. So if you miss the exact spot, you are off focus. ALSO, if you have it working with the tripod it comes with and listening loudly with the onboard speaker, it will shake enough to move it and to get it off focus. I have to get up every 20 minutes to refocus.
c. This is common of all these small projectors, the interface works but it is awful, and the remote is just garbage.

OVERALL: It is still a nice little projector and it delivers a lot for your buck. It is just full of little nagging issues which very much detract from what could be an enjoyable experience. Their service department is responsive but I wish it tried to solve issues instead of, very politely, trying to convince the user that there is nothing wrong with the unit...

Jonathan Yang
5.0 out of 5 stars Great mini projector for the price.
20 September 2018 - Published on Amazon.com
Verified Purchase
I wanted a small LED projector I could use indoors and outdoors to watch movies at home. Read some good reviews on the P300 Neo and talked to their customer support to make sure this mini projector would be a good fit for me and I’m glad I went with it. Not only is this projector VERY portable but the projection its perfect for my kids. It’s super easy to connect to my laptop and just as easy to connect my iphone X, which allows me to pretty much stream whatever I want. Very happy with my AAXA projector and I would recommend.
Read more

5.0 out of 5 stars Great mini projector for the price.
Reviewed in the United States on 20 September 2018
I wanted a small LED projector I could use indoors and outdoors to watch movies at home. Read some good reviews on the P300 Neo and talked to their customer support to make sure this mini projector would be a good fit for me and I’m glad I went with it. Not only is this projector VERY portable but the projection its perfect for my kids. It’s super easy to connect to my laptop and just as easy to connect my iphone X, which allows me to pretty much stream whatever I want. Very happy with my AAXA projector and I would recommend.
Images in this review

arik
3.0 out of 5 stars Nice and very usable, with quirks
7 December 2017 - Published on Amazon.com
Verified Purchase
I mostly like it for the size, contrast, brightness. I use it almost every day.

it sounds like an old laptop on high performance mode. you definetly hear the fan, but with the movie in the background you forget.

if you want the projector to attach subtitles to the movie it doesn't work. subtitles in english are unreadable, and other language such as hebrew doesn't work.

I think the price is good but you have to know the downsides.

PROS:
size , contrast, brightnes, good white color. sharp if you nail the focus ring by the milimeter. no lag. nice tripod. price. remembers last settings.
good standart light even with battery but for 30 minutes- eco mode is longer. (buying an extrenal battery for outdoor use as it draws only 25W)

CONS:
color too harsh. red is pink. no subtitle support (very important for traveling if you are not english native - now i have to buy a player..),
a lot of light is spread around the picture (like a 20% frame of dim light). no keystone on the device bottons (have to keep the remote with you).
handle gently with focus ring to nail exact focus.

update :
loses focus after few minutes. needs to be refocused after about 5 minutes. and than stays in focus

Julian Nam
4.0 out of 5 stars Fun Little Gadget
18 April 2018 - Published on Amazon.com
Verified Purchase
Fun little gadget. In works as advertised, and most of the reviews are spot on as they point out the pros and cons. It's got a nice picture, it's a little loud, it gets a little hot, it's very portable, etc. Just a few notes:

1. It's not super bright. If you use this in a dark room with all lights turned off, then it is super bright. But if you try to use this in a room with windows during daytime, then it's not that easy to see.
2. The battery is almost a joke. It says 2.5 hours in Eco mode in the description here. On the AAXA website, it just says 60+ minute operation. We were able to get exactly 60 minutes on Standard mode: we were watching a movie, and the projector shut off at the 59 minute mark, but we probably spent 1 minute setting up in the beginning.
3. Connecting was surprisingly easy. Bought a Mini DisplayPort to HDMI cable (like  AmazonBasics Mini DisplayPort to HDMI Cable - 6 Feet ) and connected the MacBook Air to this projector. Then selected Digital Input on the projector, and Voila! There was a beautiful image.
Read more
3 people found this helpful
Go to Amazon.com to see all 61 reviews 3.5 out of 5 stars
Back to top
Get to Know Us
Connect with Us
Make Money with Us
Let Us Help You
© 1996-2021, Amazon.com, Inc. or its affiliates