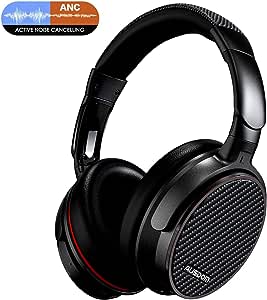 by AUSDOM
3.6 out of 5 stars 46 ratings
Usually dispatched within 6 to 10 days.
Arrives: 1 - 8 Sep. Details
Ships from and sold by Life Idea SG, from outside Singapore. For information about products sold by international sellers, click here.

D. Fischer
3.0 out of 5 starsI would like to share I own several high end noise cancelling ...
5 August 2016 - Published on Amazon.com
Verified Purchase
This review is of 4 lower cost active noise cancelling headsets. They are:
• Monoprice
• Audio-Technica ATH-ANC-7b
• Noise Hush / Naztech i9BT
• Ausdom ANC-7

The comments and process I used below may not be applicable to your needs. I would like to share I own several high end noise cancelling aviation headsets. While my interests have changed, I was also at one time a bit of an audiophile. I may not be the perfect evaluator, but I’m at least reasonably qualified.

My objectives:
I needed a pair (wife and I) of headsets that could be used in cars, airplanes, and whilst cutting the grass. I didn’t want to drop the kind of money Bose would have cost (times 2), and so set out to find the best I could in the $100 - 150 price range.

Learnings:
• None of the headsets have adequate passive noise cancelling.
• Bluetooth turns out to be really handy.

The process:
Over a few hours of at home testing and roughly 15 hours of commercial flight, I concluded:

Fitment and Adjustability:
• The Audio-Technica simply wasn’t acceptable and also wasn’t Bluetooth. Cut.
• The MonoPrice and Ausdom were deemed acceptable.
• The Naztech won handily, with great fitment, comfort, and adjustability.

Passive Noise cancelling (I feel all are falling short here):
• Monoprice is the quietest, followed by the Naztech, and then the Ausdom, separated roughly equally.

Case, options, and adapters:
• All did well here, with no differences worthy of note.

Bluetooth:
• Far more important than I’d expected. After all, the airlines don’t use Bluetooth for their built in display’s, and so I’d assume the Monoprice, being quieter, would win-out. I was wrong. Bluetooth means you can use a tablet on a plane wirelessly, and of course this holds true in cars, riding mowers, and simple home use.
• Monoprice doesn’t offer headset with Bluetooth (as of this writing), and so regrettably was eliminated.

Gain, and system controls.
• The Ausdom’s volume control seems weather tight, while the Naztech is most certainly an old style analog potentiometer that feels crude. I suspect it will attract dirt and become “noisy” on adjustment too over time.
• However, the Ausdom lacks volume. I tended to use on the top 3 positions of volume at all times, and there were times I needed more.

Active Noice Canceling
• The Ausdom has some kind of noise artifact that makes it seem louder. I suspect spurious noise in the upper teens of the audible range (what the human ear translates as “spaciousness”). To me it was simply tiring and distracting.
• The Naztech was much quieter, with my wife claiming them as “hers” early on.

Pricing:
• Varies quite a bit over time so I won’t list them all, but the Naztech was cheapest at only $79, while the Ausdom was $129

Conclusion:
I’d read a lot of good reviews of the Monoprice and had expected it to win. Nope. I ordered a second Naztech before the trip was over and have sent the other 3 back. Why?
• As it turned out, the Medusa’s nest of wiring hassles are more trouble then I’d expected. Bluetooth became a must have for me.
• While I like the Ausdom’s volume control better, it lacked gain, had the least passive noise cancelling and the most noise artifacts in the active cancelling. And was the most expensive.
• Did I mention the Naztech was only $79? I don’t know why it was so cheap, but you’ll notice I bought another pair right away.

What does the Naztech, my winner, need to do better?
• If they can seal up the volume control that would be a big win.
• The passive noise cancelling needs to be better. A slightly larger cavity/earpiece would allow for some sound deadening material (silent sport or etc) to be placed inside.
• I’m not sure the headset “swivel” on each ear peace is rugged enough for the way some will treat them, although I doubt I ever have an issue.
• Personally, I wish it had a user replaceable battery in it. 2x aaa would be a good idea.
• Bluetooth sharing as implemented in the Skygenius using their “Shareme” function would be brilliant. Too bad I can’t buy those in the US.

Patel
5.0 out of 5 starsAmazing Headphones
17 May 2016 - Published on Amazon.com
Verified Purchase
The Ausdom ANC7 headphones are pretty amazing. They are fairly light which makes them very comfortable to wear for a long duration of time, like on an airplane or bus ride. The noise canceling is nice as it cancels out most of the surrounding noise. One issue I have with this aspect is that with the noise canceling turned off, the headphones seem very quiet. It is when this feature is turn on where the headphones sound better and seem to have more volume to their sound, which is why I listen to them with noise canceling always turned on. The headphones have pretty good build quality and they look amazing with the carbon fiber design. The Bluetooth works great. There were no issues when I connected them to my phone or computer. The buttons on the ear cups are easy to use and work great, allowing me to play/pause, skip/previous, and increase or decrease the volume. The sound quality is on point. I am not too knowledgeable about sound so I can’t give opinions like an audiophile can. But overall the sound is crystal. The bass is not too overpowering so that it causes distortion, but at the same time it has the perfect amount of bass to make music sound great. The headphones take around 2.5 hours to fully charge and last for a long time. The hard cover case is a great bonus to help you protect the headphone from drops. Overall these headphones are the best I ever had and I would recommend them to anyone.
Read more
8 people found this helpful.

fmaviator
2.0 out of 5 starsHoped for the best, got the worst.
17 September 2016 - Published on Amazon.com
Verified Purchase
I really wanted to like these headphones. Reviews on audiophile websites spoke highly of these phones and the value they provided. Out of the box I was impressed with the design. They felt very comfortable on my head and paired easily with my Iphone. In the low noise environment of my home the noise cancelling feature worked well. However, I bought these to use on my daily 45 minute bus commute. During the first bus ride, I noticed a frequent audio artifact, a warbling, when the bus would jar over bumps and other road imperfections. I assumed this to be the inability of the DNR to adjust quickly enough to rapid external sounds. Previously, I owned an older Audio-Technica noise cancelling headset that very infrequently exhibited this characteristic but with the Ausdom it was a near constant occurrence that made it unbearable to listen too. At the end of the day on the way home, I tried the headset again and this time after a repeat of the "warbling" the left headphone ceased to work. When I got home I contacted Amazon and returned this item.
Read more
2 people found this helpful.

Matthew N.
4.0 out of 5 starsAlmost but not quite
15 June 2016 - Published on Amazon.com
Verified Purchase
Active Noise Canceling- Awesome
Sound Quality - Good, full sound Active noise cancelling always causes headphones to be a little pitchy when its used, its normal, but these compensate fairly well
Comfort - This is the part that is lacking the most, they don't really cup your ears. The inside is a very hard plastic and hits my ear. If I wear them as a hybrid on/around ear then they are better and more comfortable.
I'm constantly in the search of the best fitting and most comfortable headphones. My search will continue, but this is a good bridge for the time being.
Read more
4 people found this helpful.

Guy Giroux
1.0 out of 5 starsVery short run-time, no response from
27 November 2016 - Published on Amazon.com
Verified Purchase
The ad says 'provides over 18 hours, both playing ,talk time and up to 120 hours standby' but over the 5-months I've owned these headphones, the best run-time I gets is about 2-hours (noise-cancelling and music on).

I'll post periodic updates if Honor does or does not reply.
Read more
3 people found this helpful.
Go to Amazon.com to see all 45 reviews 3.4 out of 5 stars
Free & fast delivery, movies and more with Amazon Prime
Prime members enjoy free & fast delivery, exclusive access to movies, TV shows, games, and more.
> Get started
Back to top
Get to Know Us
Connect with Us
Make Money with Us
Let Us Help You
© 1996-2020, Amazon.com, Inc. or its affiliates