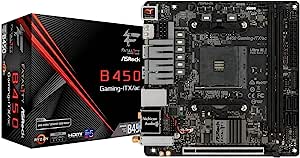 Richard Ho
5.0 out of 5 stars Good board, just a little toasty.
16 March 2020
Verified Purchase
Nifty little board that fits well in my SG-13 case.

Do take note that mitx boards tends to perform a little toastier compared to regular atx or itx boards, you might want to place in additional fans to provide ample cooling to cool the board down.
Read more
2 people found this helpful
Helpful
Report abuse
See all 1 customer reviews
Write a customer review

Update 7/12/2020: Just throwing this out there, I have had no problems and it continues to work just fine for me. I'm on the latest bios version for my CPU and everything is good.
Read more

Update 7/12/2020: Just throwing this out there, I have had no problems and it continues to work just fine for me. I'm on the latest bios version for my CPU and everything is good.

Baylor Burkman
5.0 out of 5 stars How To: Adjust VRAM (For APU's) using this MOBO!
11 February 2019 - Published on Amazon.com
I bought this motherboard from NewEgg awhile back and everything about it was & still is perfect, except for adjusting the VRAM part for my 2400G APU. This motherboard is an absolute pain on adjusting VRAM, so I've decided to write a review explaining how to successfully do it.

It worked for me using the latest BIOS. Hope this helps!
Read more
55 people found this helpful

Hussain Khalil
1.0 out of 5 stars It's an unreliable and broken board
2 March 2019 - Published on Amazon.com
Verified Purchase
I must be extremely unlucky because my experience with this board has been very different than that of the other reviewers. I have gone through 3 of these boards (RMAd the first, then bought a new one) and they have all had major breaking issues that have caused so much frustration.

In my board, the fan speed and temperatures are not correctly displayed under H/W Monitor. Upon RMAing this board, I got one that had a broken AHCI controller so I couldn't even boot Windows. It seems ASRock has no quality control and I will never be buying from them again.

Don't waste your money and time with this board as I have. Consider alternatives from MSI, ASUS, and Gigabyte.
Read more
22 people found this helpful

Braheem
1.0 out of 5 stars Do NOT buy for Zen 2!
12 August 2019 - Published on Amazon.com
Verified Purchase
This board will NOT work with a Zen 2 cpu. On cold boots it will sit there and just reboot itself over and over until it eventually resets the bios THEN boot. Despite bios updates it won't work, I got 2 of these boards, both had the same issue.
Read more
17 people found this helpful

Ian S.
1.0 out of 5 stars Should have listened to negative reviews
13 August 2019 - Published on Amazon.com
Verified Purchase
When I first got the board, I had yet for the case and PSU to arrive, so I could not test it right away. However, I was worried when I opened the box and found two capacitors already bent while still in the anti-static bag, and it looked like the bag itself was scuffed from shuffling in the box or something, as the bottom of it had drag marks from the metal on the bottom of the board. I decided to hope for the best and see if it would work once I assembled everything. Sadly today, after 4 hours of installing it, testing it, taking it back out, testing it without anything but bare essentials in, attempting to reset CMOS, etc., it refused to boot to POST. The BIOS would never boot up and no matter what I tried, the mobo was stuck in an infinite boot loop. I even tried booting it off the case, if it might have just been shorting the board somehow, but no luck there either. As other reviews have said, ASRock's quality control seems to leave a lot to be desired. While I would like to give them the benefit of the doubt that I simply got a bad board, which happens all the time with motherboards, multiple reviews seem to indicate that this is a problem with this board, or potentially ASRock in general.
Read more
10 people found this helpful
Go to Amazon.com to see all 71 reviews 3.4 out of 5 stars
Back to top
Get to Know Us
Connect with Us
Make Money with Us
Let Us Help You
© 1996-2021, Amazon.com, Inc. or its affiliates