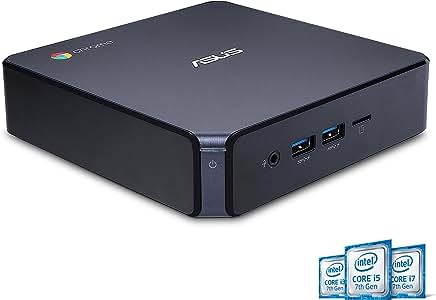 Style: N019U
Technical Details
Additional Information
Feedback
Would you like to tell us about a lower price?
If you are a seller for this product, would you like to suggest updates through seller support?

Powered by Intel Core i3, the ASUS Chromebox 3 delivers a perfect balance of desktop performance with the latest in connectivity options. Use your favorite Google Play apps across platforms and on multiple displays with DisplayPort over powered Type C. Stream your favorite content over Gigabit LAN or 802.11ac Wi-Fi.

ASUS aspires to deliver the incredible in everything it does. With more than 16,000 employees around the globe and a world-class R&D team of 5,500 engineers, ASUS is dedicated to the design and manufacture of products that perfectly meet the needs of your digital lifestyle.

Perfect for work or play

For Businesses and Education

Dinyar F. Ghyara
3.0 out of 5 stars something wrong here
1 April 2020
Style: N019UVerified Purchase
the description says its a Intel i3 cpu. but when i run diagnostics via different tools, it says it is the intel Celeron chip. Am i seeing the wrong thing? or was I sent the wrong device?
Read more
Helpful
Comment Report abuse
See all 1 customer reviews
Write a customer review

mrbillhertz
5.0 out of 5 starsI love it.
21 August 2018 - Published on Amazon.com
Verified Purchase
Ok, this thing is great. I love the Chrome OS. This is my 4th Chrome device, and I could be happier to no longer need to use Windows. I can't afford Apples. My first 2 were a low-end Chromebook and Chromebase. ($250 ea.) They worked extremely well for what I was doing at the time. Because I started to do a lot with video, the basic models were no longer up to the task. I then bought a high-end Chromebook with an i5 processor and 8gb of ram. It is crazy fast!

So why did I buy a Chromebox? I needed more desk space and I did not want to have to unplug my add-on monitors and other accessories every time I wanted to take my laptop somewhere and re-assemble everything when I got back.

So, how do I like it? Yes, 5 stars. The i3 processor is slightly slower than my i5, but it is fulfilling my needs quite well. The small size takes up so little space and has more connections than I will ever use. It doesn't come with a keyboard or a mouse, but I just took one of the 5 I had in the closet.

Keep in mind in choosing your device that you are not running Windows, so you really don't really need as much juice for it to be faster. The Celerons were ok for general stuff, but if you are doing the heavy stuff I would highly recommend the i3 or I5. This thing boots in 7 seconds, and shuts down in 5. Updates install in seconds as well.

Be sure when you order your chromebox that it is a chromebox 3. There are some major differences and there are a lot of the older ones on Amazon.

One last thing that I want to mention. I am paralyzed on my right side. In the "accessibility" settings there are quite a few helpful features I use is the"sticky keys". Using a keyboard with one hand is difficult. Sticky keys allow the user to push the shift key and release it and stays in shift mode until the next key is pressed so you do not have to perform contortion tricks to use the "@" key. Just press shift, release it, press the 2 key and you get "@". Handy!

I can't say enough good things about the Chrome products I've used. The first 3 were Acer models, and now this is an Asus. I see no difference in operation at all, and there is virtually no bloatware.

What about MS Office? Office 365 works perfectly on it, but I find that Google Docs works out fine for me and it's free.

Ok, I must update this. The unit has 4 GB of RAM. I think for most people this would be quite sufficient. As mentioned above, I do a lot with video, so I wanted to upgrade to 8 GB. I wanted to know what type of ram was inside without popping it open so I wouldn't have to re assemble it again after the RAM arrived. Different sources on line have conflicting answers, so I called ASUS. The 1st time I was told that it wasn't upgradeable, and it was DDR3 1600 mhz. I knew this was wrong, because ASUS literature says you can go to 16 GB. I look further, and get more conflicting info. I called again, and was told that the RAM was DDR4, 2133 mhz. That matched a couple of sources I have seen, so I ordered it. Upon receiving my order, I was quite surprised to see that I actually needed DDR4 2400 mhz! Grrrrrr!

I still give the device 5 stars, but ASUS does a horrible job of making sure their call center has the right information.

Bottom line? Open it up before ordering your RAM to see what you actually have.

Doc
5.0 out of 5 starsWorks Like A Charm
2 August 2018 - Published on Amazon.com
Verified Purchase
Has worked flawlessly. So much quicker than my Windows 10 Computer. I have a beast of a Windows 10 with 32 gig and 8T of hard drive and start the computer from an ssd, as well as a fast 8 core AMD and the chromebox is still much faster. Took me less than 10 minutes to have it up and running and configured. Signed in with the same user account as my chromebook and android tablet and had it updated with all my programs. Bought as a replacement for my backup computer and now I find I am using this more than my primary computer.
Read more
49 people found this helpful.

Matt
5.0 out of 5 starsPlug in, sign in, start using
28 July 2018 - Published on Amazon.com
Verified Purchase
Works very well, as expected. I love the simplicity, there’s nothing to set up no bloatware no bullsht, just plug in, sign in, and you’re set.
Read more
35 people found this helpful.

A. Miller
5.0 out of 5 starsThe minimalist desktop
23 July 2018 - Published on Amazon.com
Verified Purchase
This is a perfect device for someone who wants/needs a minimalist desktop. It boots within seconds like any other Chrome device, but if you're not familiar with anything other than a Windows machine, this is a welcome change. No need for anti-virus, etc. It's not limiting in the least, though someone moving to a Chrome device for the first time may need to make a few adjustments to how they work. However, in this day and age, when are you ever not connected to the internet? Unless you need a boatload of storage for your music library or something like that, or perhaps you need some intensive programs installed (image editing maybe?), then there really isn't a need for a full-blown desktop. Cloud apps have come a long way and even something like Only Office is a free and fantastic replacement for Microsoft Office. I really only need to print, scan, browse the net, and do word processing with a desktop, all of which can be handled via this Chromebox: printing via HP's Print for Chrome browser extension, scanning via the printer's web interface, and word processing via one of the free cloud-based office suites. It's plenty fast for what I need it for, and it not only supports Android apps but also has support for Linux apps (in the dev channel, I think). Fast, secure, small footprint on the desk, etc. I've been a Chromebook user for 4-5 years now, and now that I've got the Chromebox, my house is more or less full Chrome. No regrets so far.
Read more
39 people found this helpful.

Sara Garcia
5.0 out of 5 starsSmall box with plenty of power for Home Entertainment
30 June 2018 - Published on Amazon.com
Verified Purchase
I purchased this to replace my 5+ year old streaming device. Set up was a breeze and love how user friendly chrome OS is. So far streaming netflix and browsing the internet is a piece of cake for this little computer. My wireless keyboard and mouse worked right away. This also comes with a mounting device so it can hide away nicely behind a wall mounted TV.
Read more
30 people found this helpful.
Go to Amazon.com to see all 126 reviews 4.2 out of 5 stars
Free & fast delivery, movies and more with Amazon Prime
Prime members enjoy free & fast delivery, exclusive access to movies, TV shows, games, and more.
> Get started
Back to top
Get to Know Us
Connect with Us
Make Money with Us
Let Us Help You
© 1996-2020, Amazon.com, Inc. or its affiliates