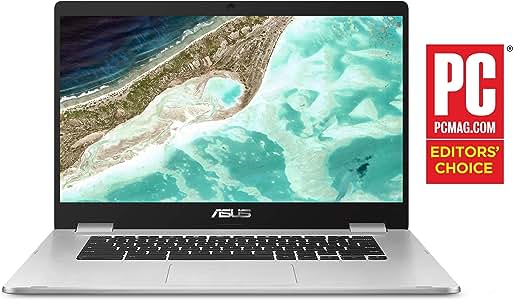 by ASUS
4.1 out of 5 stars 569 ratings
Available from these sellers.

Style: 15.6" | 32G Storage
Technical Details
Additional Information
Feedback
Would you like to tell us about a lower price?
If you are a seller for this product, would you like to suggest updates through seller support?

Ganesh
5.0 out of 5 starsMy very first Chromebook!
30 November 2018 - Published on Amazon.com
Style: 15.6" | 32G StorageVerified Purchase
I wanted to buy my mom a laptop since her 10 year old Toshiba finally failed. I was looking at all the options out there, but everything in my budget range was either way too slow. All she does is watch movies and surf the web, youtube, etc., so I wanted to find her a laptop that was particularly keen for those type of tasks. I started looking into Chromebooks. Mind you, this was the very first Chromebook that I've purchased, so I didn't know what to look for when it comes to specs. I mean, lets face it-when it comes to specs, Chromebooks that are out on the market right now has some very weak specs. But dont be fooled by the unimpressive numbers. Chromebooks use Chrome OS which was developed by Google. They use a completely different user interface than, say Microsoft or Apple. Chrome OS uses significantly less resources, therefore your computer runs very fast, even with low specs. For example, my mom's old Toshiba had an 10 year old Intel Celeron processor, 8 GB of ram, 500 GB HDD. Nothing too impressive, just an average laptop. This Toshiba took about 4 minutes to boot up. When it comes to surfing the web, watching YouTube, etc., it was an absolute pain! This ASUS Chromebook has similar, or even weaker specs: Intel Celeron processor, 4 GB ram, 32GB storage. You would be wondering why on earth would anyone get a computer that has such weak spec sheet? Don't be fooled. I was skeptical too when I first purchased this Chromebook. The laptop is able to boot up in 7 seconds. Thats right, 7 SECONDS!!! The entire setup of the laptop took less than 2 minutes. All you have to do is log in using your wifi information and Gmail account. Everything else sets up automatically. The user interface was really simplistic, even a kid could operate it. It makes sense as to why it only has 32GB of storage. You store all your documents on Google's cloud. All the apps you could possibly ever want is included: Google Calendar, Google Docs, Google Drive, etc. In my mom's case, all she does is watch YouTube, so this is the perfect laptop for that. Not to mention, it is incredibly thin! It almost looks like a MacBook Air from far away. The Chrome OS updates your computer discretely so you don't have to worry about the hassle of updating your laptop or be alerted to do so. You also dont get any viruses on Chromebooks too since Google has your back with their security features. All in all this is a fantastic laptop for the price. My mom has been using it for a couple days now and she absolutely loves it! In fact, she tends to baby it by covering it up with the packing sleeve after every use. LOL!
Read more
199 people found this helpful.

T. Little
1.0 out of 5 starsThe display (non-touch screen model) is horrible!
2 November 2018 - Published on Amazon.com
Verified Purchase
I always like to start with something positive, and I will. Overall the device looks great, the size is perfect, the keyboard feels good, and the performance seemed more than adequate. Asus seemed to do a good job of putting together a reasonably priced chromebook that would be suitable for most people. Where they missed the boat big time was on the display. It was so washed out and grainy that I'm not totally sure there wasn't something wrong with the model I received. If that display quality is indeed part of their specs and design, then I strongly urge you to consider something else. After using it for 15 min it began to give me a headache...it was that bad. My other chromebook is an Asus C302 flip, and I couldn't be happier with it. I was expecting a similar experience for this newer 14" model. I purchased it for my wife, and unfortunately I'm sending it back tomorrow. The display is simply so bad that neither she nor I can use it.
Read more
157 people found this helpful.

P. Masullo
3.0 out of 5 starsI love this Chromebook but...
17 January 2019 - Published on Amazon.com
Style: 15.6" | 32G StorageVerified Purchase
I do. I absolutely love this device and I am so glad I bit the bullet and bought one. I have had it for a few weeks now and I don't miss my Windows laptop one single bit. I was worried that my laptop had features with which a Chromebook could not compete. I haven't come across any.

Chromebooks do not come with optical drives or a hard drive with a ton of space. You also can't load third party software such as MS Office or TurboTax. There simply isn't the space or computing power to do so, not to mention the OS to support it.

Chromebooks do come with the Chrome OS, browser and the ability to download apps from Google Play. Onboard storage is limited to 16 - 64 GB but Chrome is fully integrated with Google Drive (unlimited storage) and you can easily use an SD card or a thumb drive so you can access files offline. They also have considerably more battery time than a conventional laptop. You can easily use the online version of MS Office if your account is associated with a licensed copy of MS Office or you can subscribe to Office 365 and most software applications you would use (e.g. Turbotax) have web-based versions as well.

Anyway, back to the review of the ASUS C523. Its a great device. The C523 has a full 15.6 inch display so it "looks" like any full size laptop. It is fully integrated with all of my Google resources...mail, Google Drive, Youtube and I can access content from Netflix via the Chrome browser or the app. I can store files locally if I want but I usually just save them to Google Drive. Its very portable and light so I can move with as easily as a spiral notebook. The thing that really wows me is that it is "instant on". I don't have to wait for some convoluted boot process...I open the lid, type my PIN and I am in with no delay. Updates are done in the background and I have not had to do a reboot yet because of one. It intefrated with my (wireless) printer in a snap...I have not tried USB connecting the printer so I don't know if that would work.

The only negative thing I have to say is regarding battery life. ASUS says you can get up to 10 hours of battery life. That is not true. There is nothing that you can do on this device that is economical enough to get you to 10 hours of battery life. I would say you can count on about 5 hours MAX if you are just surfing the internet or watching Netflix and the display brightness is kept as low as possible. I usually have to plug it in shortly after four hours; still better than my laptop.


Read more
133 people found this helpful.
Go to Amazon.com to see all 321 reviews 3.7 out of 5 stars
Free & fast delivery, movies and more with Amazon Prime
Prime members enjoy free & fast delivery, exclusive access to movies, TV shows, games, and more.
> Get started
Back to top
Get to Know Us
Connect with Us
Make Money with Us
Let Us Help You
© 1996-2020, Amazon.com, Inc. or its affiliates