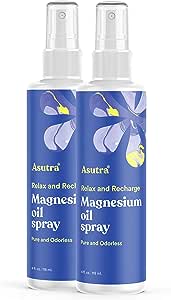 by ASUTRA
4.3 out of 5 stars 6,118 ratings
Secure transaction
Returns Policy
Your transaction is secure
We work hard to protect your security and privacy. Our payment security system encrypts your information during transmission. We don’t share your credit card details with third-party sellers and we don’t sell your information to others. Find out more
New (2) from S$25.56

KKB
5.0 out of 5 stars My son's tics have reduced dramatically
7 October 2017 - Published on Amazon.com
Verified Purchase
This review has been long overdue. When my son hit 3 years old he starting getting major tics like rapid eye blinking, constant throat clearing and making this sucking noise by sucking in air. In retrospect, he started having tics when he was 2, but we always thought it was just a phase because it was just some throat clearing here and there. It wasn’t until he was 3 and started getting nervous because he was in school and it was a constant thing for him that we realized he had tics. I didn’t think he had Tourette’s because no one else in our family has it. I know there isn’t much information on how kids get it, but I think there has got to be some genetics to it because reading posts parents who have Tourette’s usually have an offspring with Tourette’s. Anyway, so I started reading up on things that could help kids with tics and dairy is a big one. It inflames the body, which can cause tics in kids. We eliminated the dairy and the tics got slightly better, but they were definitely still there and very noticeable. So I started reading up some more on what might cause tics and magnesium deficiency is another cause, so I started him on the Magnesium oil. I also ready that essential oils could help, Vetiver Oil being a big one for kids with tics, so I started doing a blend of Vitiver, Frankincense, Lavender, Cedarwood, and Lemon. Then I found the Plant A+ Attention, which has a lot of those oils in it, so I put that on my son’s big toe (because it’s supposed to be linked to the brain) in the morning on days he has school and at night I rub my own blend on his chest or back. I have to say ever since I’ve been putting that A+ Attention on him his teachers are telling me he’s been trying so hard at school. He has so much energy, so it’s always so hard for him to sit still and keep his hands to himself, but he’s been doing great these last three weeks. Also, some Vitamin B+ deficiencies might cause tics, so I started him on the Berry Garden Gummies Kids Multivitamin because it had Magnesium in it too with other vitamins he might be lacking. So fast forward to today, he’s now 5 and I’m happy to say that he’s pretty much tic free! I’ve been letting him eat a little dairy in his diet like if we go to a birthday he can have frosting on the cupcake and some chocolate and he might have little throat clearing, but definitely not noticeable to anyone who doesn’t realize he was a child with major tics! It’s been so amazing for us. I just wanted to post this in case I can help any other parents out there in this situation. :)
Read more
313 people found this helpful

Amazon Customer
1.0 out of 5 stars BEWARE.
12 July 2018 - Published on Amazon.com
Verified Purchase
I just got this bottle and used it on my back this morning. I let it sit then washed it off. My back itched all day long, and after checking in the mirror when I got home just now I am covered in raised painful bumps and a raised rash. W T F
Read more

1.0 out of 5 stars BEWARE.
Reviewed in the United States on 12 July 2018
I just got this bottle and used it on my back this morning. I let it sit then washed it off. My back itched all day long, and after checking in the mirror when I got home just now I am covered in raised painful bumps and a raised rash. W T F
Images in this review

Solunari
5.0 out of 5 stars Got pain - spray it on!
21 August 2016 - Published on Amazon.com
Verified Purchase
I have fibromyalgia. While medical science does their research to find out the hows and whys of this diagnosis, I try to focus on the day to day management of symptoms. Specifically, the management of pain, muscle spasms, and poor sleep.

Enter magnesium. It's a great supplement, that upon doing research, I found most people are deficient in. Ok, great! So first I tried oral supplements.

Magnesium oxide is your cheapest and most accessible supplement. It is not well or easily absorbed and results in a relaxation of the digestive system/bowel. The next higher supplement is Magnesium Citrate - less digestive discomfort, more relief. Finally, there's Magnesium Glycinate/Malate. I find these usually in a chewable tablet - you can take quite a bit of it without being in the bathroom forever. All things considered, some of the oral supplements can be quite helpful.

Enter Magnesium oil! Guys, your skin is a conduit directly to your bloodstream! No digestive system involved! Spray on magnesium "oil" (actually, dissolved magnesium flakes) and let it soak right in. Granted, if you spray on enough, you may still have some issues with your bowel because it does relax large muscles, but in my experience, it manages the pain at the spot.

My only other caution is don't get dehydrated. I have found that when I use a lot of magnesium, I have to drink a lot of water to keep the balance. Your hands will feel very dry after rubbing this product in - I recommend coconut oil or some other natural skin emollient to counteract the drying effect.

Kcb
5.0 out of 5 stars Best magnesium spray!
4 February 2017 - Published on Amazon.com
Verified Purchase
I love this magnesium spray. I use it twice a day on my feet and it helps with sleep headaches and digestive issues. The product has no smell and I have no skin irritation. This is the best magnesium I have ever bought!
Read more
361 people found this helpful

Janice M Humphreys
1.0 out of 5 stars Check inside bottle before using.
12 June 2017 - Published on Amazon.com
Verified Purchase
Thankfully, I opened the bottle to look inside. Both bottles had rusted sprayers. You could even see some of the liquid in the tube discolored from the rust. I am going to assume it was a VERY OLD product for both bottles to be rusted like this.
Read more

1.0 out of 5 stars Check inside bottle before using.
Reviewed in the United States on 12 June 2017
Thankfully, I opened the bottle to look inside. Both bottles had rusted sprayers. You could even see some of the liquid in the tube discolored from the rust. I am going to assume it was a VERY OLD product for both bottles to be rusted like this.
Images in this review