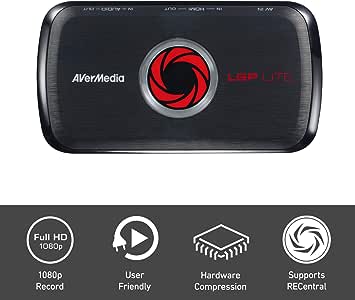 by AVerMedia
5.0 out of 5 stars 1 rating
Available from these sellers.

Style: 1080P Game Capture
Technical Details
Additional Information
Feedback
Would you like to tell us about a lower price?
If you are a seller for this product, would you like to suggest updates through seller support?

A USB box that captures, records, and streams your HD video content up to 1080p, Aver Capture HD has been streamlined for users who prefer to work directly with their PCs, Macs, or other laptop. This capture device comes with H.264 hardware encoder, which delivers lower CPU usage and smaller file size even for full HD footage. Best of all, the file format is user-friendly for any post-editing or uploading needs. Aver Capture HD acquires HD footage via the HDMI connection, while its pass-thru function s a smooth HD playback or viewing experience. In addition, the on-board hot button makes quick recording and streaming possible with one easy click. Videos and footage can be directly connected to any streaming platform, and you can add your own touch with voiceovers during the streaming process.

Stan Ng
5.0 out of 5 stars working well for me
29 March 2020
Style: Live Gamer MiniVerified Purchase
The negative reviews made me think long and hard whether to go for Avermedia live gamer mini or stick to the mainstream Elgato HD60s. But my budget suits Avermedia better so I went for it anyway and is pleasantly surprised that it is working well unlike what the negative reviews were saying. My stream is smooth and quality is good. No lag and im streaming on a laptop! The shipment from US was fast too! Took about 4-5 working days.
Read more
Helpful
Comment Report abuse
See all 1 customer reviews
Write a customer review

Travis Vanden Boogart
5.0 out of 5 starsGood HD Capture Device
5 August 2018 - Published on Amazon.com
Style: 1080P Game CaptureVerified Purchase
I got this product so I can record/stream games off my PS4 and Nintendo Switch. So far, I am liking how this works. Set-up was really simple and after installing the proper drives, it has been working like a charm. I will say that there is a slight delay between your actual gameplay on the TV and the recording/stream, but it isn't something that is too drastic. The software that it recommends also separates the gameplay and commentary so if there is any delay when you record, you can easily line it up in the editing process. The quality is awesome. The best part is it doesn't require the latest in tech, which my PC lacks. A great capture card for anyone who wants to upgrade and doesn't have the strongest PC out there.
Read more
33 people found this helpful.

NKSpencer2
5.0 out of 5 starsIf your thinking about it get it.
20 April 2018 - Published on Amazon.com
Style: 1080P Game CaptureVerified Purchase
It works great and I was a little skeptical because it is USB 2. But it works as well as my other USB 3 capture cards, as far as inputting the video signal. The only thing I don't like is the fact that it does not work without proprietary software running in the background. My other capture cards don't need drivers they are plug n play. However that would not stop me from recommending this capture card because if you are doing multi camera with a software switcher this is a good option it works with all the switchers I use for example OBS. Also if you use software switchers you know using 2 devices in the same hardware family can cause problems (if you didn't know, now you do). For example I have 2 other capture cards by the same manufacturer and the software gets confused and locks up because they show up as basically the same thing. Even two USB webcams, different models but same manufacturer causes problems with software switchers. So the thing I don't like helps because it shows up as a completely different device and makes it easier for the switching software to tell witch is witch. Since I got this I haven't had any problems switching between cameras. It worked flawlessly after I installed the software and it solved my problem with devices being too similar for the software. Great device if your thinking about it get it.
Read more
26 people found this helpful.

Jordan Sidebottom
5.0 out of 5 starsWorks for lower price tier.
26 February 2019 - Published on Amazon.com
Style: 1080P Game CaptureVerified Purchase
I wanted to begin streaming, with something of a small budget. First capture card I've ever used, let alone purchased. This capture card was $100, which I found very reasonable. Most decent ones you will see going for $140+. Connection and quality issues, even with my lame laptop, are nonexistent. It did not come with any set up instructions, other than how to connect the HDMI, audio and USB 3.0. Go to the AVerMedia website to download all the required software/drivers/firmware, otherwise it won't work. I have no lag with visuals or audio and neither has my chat seen any caused by the card itself. I would highly recommend this if you are looking for something portable and relatively affordable.
Read more
16 people found this helpful.

shaeeliz
4.0 out of 5 starsMac Users - Double Check! Otherwise great card.
19 January 2019 - Published on Amazon.com
Style: 1080P Game CaptureVerified Purchase
This capture card is great from what I’ve seen so far. Major downside for me is I guess I didn’t read carefully enough. While yes, it is Mac compatible, it’s ONLY compatible for recording, not streaming. This was my mistake, so no fault on Aver here. I am able to work around it by using window capture on OBS to stream, but there is a good 1 second delay when you do it that way. I’ll be doing my first stream with it tomorrow to see how much that impacts stream. Overall, great device, just wish I read all the fine print so i could have gotten one that would actually work for me.
Read more
13 people found this helpful.

PixelBitZombie
2.0 out of 5 starswell then all the best to you
5 March 2016 - Published on Amazon.com
Style: 1080P Game CaptureVerified Purchase
Review of AVerMedia LGP LITE. Had it for almost a month.

Hmm, how to start this.. Well I needed a new Capture Card and a decent HDMI one at that. This one caught my eye since it was 103$ at the time. So it was cheaper than the alternative Elgato for 139-159$ which is a major turnoff however I'm sure its worth the price which is stated later in the review.

It took about a week to arrive because of shipping issues with other packages it came with. Its small and light, gives light indicators for recording, streaming and errors.It includes only HDMI input and output with Audio in and out for pc AUX or other things.One micro usb, same as PS3 controller. Software does not install automatically, in fact you need to GO TO the website and DOWNLOAD the DRIVERS AND SOFTWARE (Shakes head). So if you don't have internet you are literally SOOL and I suggest you don't even try to get this product. Once the drivers and software is installed be prepared to battle constant crashes and the ability to not close the software. You literally need to reboot the software if it crashes hard enough because you can't close it. Inside the software when it works, it includes an CAPTURE and STREAM tab with a VIDEOS tab for your recorded videos.

If you don't know what some of the features do, well then all the best to you! This does not include a software manual so you don't get details about what does what. Although if you stream and use obs/xsplit you should recognize most settings. 720p and below can use 60 fps while anything above 720p can only use 30 fps and these can be used for both streaming and recording.
So before I knock on the device any longer lets take a look at why its a decent device! It records, and it records really damn good.. when the software works though. Most people will say use 60mbps Video Bitrate, 12mbps is youtube 720p standard while 1080p is around 20mbps. Using 60mbps is MAX QUALITY, however it doesn't look too different from 20-30mbps if YOU'RE RECORDING. Recording is fantastic and honestly this is a great device for anyone wanting to do youtube, you can do commentary if that's what you're into but most people will record their voice separately after the video is done. Streaming however.. that's a different story and this is where my 2 stars come from. In the Title of this product it states it's a streaming device with ultra low latency. FALSE FALSE FALSE, unless you're using 10mbps of UPLOAD, UPLOAD people, most people won't have even 5mbps of upload and I have 5mbps. You need 10mbps to even have a decent looking stream, anything below that will look incredibly pixelated and a laggy mess when your upload caps out. I personally bought this as a streaming device and it failed in every aspect.

However... if you have a computer that can stream 720-1080p with obs or xsplit then by all means, you'll be fine. If you plan on streaming from the Capture Card which can be a pain in the ass too, you'll end up sad and with a laggy pixelated mess.I won't even get into the customer service, it's as horrible as you've heard. They took around 2 weeks to respond to me and once responded, they want you to click a reply button that brings you to customer feedback. Just.. if you have questions I suggest deep searching youtube or google. So spending 100$ on a hdmi capture card, if you want to stream from the device i'd recommend Elgato or at least a higher quality capture card. Cheaper doesn't always mean better unfortunately!
So to sum this up with pros and cons

Con's***
1.) Horrendous customer service
2.) Software constantly crashes, even more on Windows 10
3.) Comes wit no HDMI cable
4.) Comes with no software and not plug in play
5.) Can't stream from device without murdering your upload (10mbps+)
6.) Short usb cable
7.) Input sometimes flickers and have to reset the hdmi cable

And because of this, it gets 2/5 stars. I wanted to return it but I'll bare through it.
Read more
38 people found this helpful.
Go to Amazon.com to see all 288 reviews 3.2 out of 5 stars
Free & fast delivery, movies and more with Amazon Prime
Prime members enjoy free & fast delivery, exclusive access to movies, TV shows, games, and more.
> Get started
Back to top
Get to Know Us
Connect with Us
Make Money with Us
Let Us Help You
© 1996-2020, Amazon.com, Inc. or its affiliates