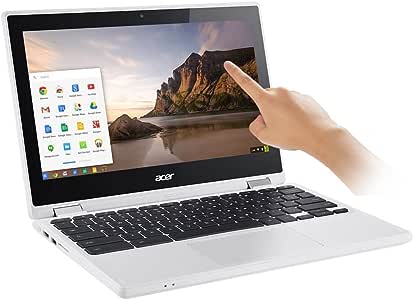 by Acer
4.2 out of 5 stars 54 ratings
International product from outside Singapore

Capacity: 11-11.99 inches | Colour: white
Technical Details
Additional Information
Feedback
Would you like to tell us about a lower price?
If you are a seller for this product, would you like to suggest updates through seller support?

Take this 11.6-inch Acer Chromebook anywhere you need to go thanks to its compact size and light weight. With its Intel Celeron N3060 dual core processor, you can enjoy fast Internet browsing and computing. The high visibility of the HD touch screen display with LED backlighting lets you use this Acer Chromebook in almost any lighting conditions.

Elizabeth
5.0 out of 5 starsBEST THING I HAVE EVER BOUGHT!
15 August 2017 - Published on Amazon.com
Capacity: 11-11.99 inchesColour: whiteVerified Purchase
This was a great purchase! It is like buying an ipad and a macbook for only about $200! You can get so many of the same apps you get on an apple product, and it works just as great. BEST THING I HAVE EVER BOUGHT! I use it every day and it works great every single day. It is very fast, and it has great quality.
Read more
20 people found this helpful.

S. Ramesar
5.0 out of 5 starsPerfect for an on-the-go student.
5 November 2018 - Published on Amazon.com
Capacity: 11-11.99 inchesColour: whiteVerified Purchase
It's my 1st time purchasing a chromebook for my sister to use in university. What caught me was the reasonable pricing since some of the well known 2 in 1 laptops are soooo expensive, but the other features definitely had me more interested to own it too.

It came securely packaged and I was surprised it was so light. A plus for moving around. I booted it up and from the get go, I was happy with the screen's display. Everything loaded quickly as well. The full 360 degree flip is a bonus, along with the touch screen, which I've found to be very responsive and in some case, preferable to the keyboard. Keyboard wise, the Caps Lock button isn't available but it's not a huge issue when one is typing. Touchpad took a little adjusting as it's so new too. In the fully flipped form, it feels a little weird as the keys are basically exposed as you hold it as a tablet. So far, I can't say about the battery life, but I will update once my sister puts it to use. It charged pretty quickly and I haven't experienced any overheating with it either.

Considering it uses Google Play store, it's very familiar for someone who uses Android. Since it comes with all the google document programs, I'm not really missing Microsoft office; they work the same and my sis often uses the shared powerpoint apps, etc. to get her projects done. It feels sturdy enough so I hope it can withstand my sister's destructive power. While I wish there were other colours than white, it's not a deal breaker or anything. The ports are all sufficient too and there's even space for external memory. Again, the CD/DVD port isn't missed either.

Overall, I'm happy with the purchase so far and as I'm updated with how it's working, I'll update this review as well.

Penguin
5.0 out of 5 starsFrom a writer...
5 October 2018 - Published on Amazon.com
Capacity: 11-11.99 inchesColour: whiteVerified Purchase
Got this specifically for writing and if you primarily use google docs then this will suit you. My main pc is Windows 7 and Chrome takes a little getting used to but being familiar with google drive and docs made it easier. I've moved away from Scrivener for drafting, but if you need to have it you can supposedly get it to run using CrossOver. I haven't tried this but I wouldn't until you get a microSD to expand your storage.
The convertible touchscreen feature works well. I've used it a few times to watch movies and read when I was working on my main pc or in the kitchen.
Overall a very fast and light computer that's great for work, correspondence, and light streaming.
Read more
3 people found this helpful.

S. K. Harrell
4.0 out of 5 starsGreat device
11 April 2019 - Published on Amazon.com
Capacity: 11-11.99 inchesColour: whiteVerified Purchase
I love this Chromebook. It's light, just the right size, does everything I need it to, and is a great portable device. It's so lightweight that it feels very breakable, and for that reason am bummed that no covers work well for it, including flip uses. I'm also not crazy about it being white. I'm sure that won't last long. The OS takes a bit of getting used to, and I miss some of the trad keyboard functionality. All told, it's great and priced well for what it is.

The key thing I dislike about it is that the keyboard cursor jumps all the time. I've had this happen with my laptop when it's unlevel, though this thing jumps when the Chromebook is flat on my desk. I've read all the documentation on it, paid very close attention to how I type to make sure I'm not dragging the mousepad... It makes me crazy. I see no correlation in how I'm typing that would cause the cursor to jump the way it does. It takes me forever to type something that should take seconds, because the cursor constantly moves elsewhere on the page. This is my biggest complaint about this chromebook. I'd give it 3.5 stars, if possible.
Read more
Go to Amazon.com to see all 45 reviews 3.9 out of 5 stars
Free & fast delivery, movies and more with Amazon Prime
Prime members enjoy free & fast delivery, exclusive access to movies, TV shows, games, and more.
> Get started
Back to top
Get to Know Us
Connect with Us
Make Money with Us
Let Us Help You
© 1996-2020, Amazon.com, Inc. or its affiliates