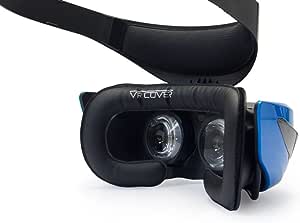 by VR Cover
Platform : No Operating System
4.1 out of 5 stars 43 ratings
In stock.
International product from outside Singapore
Arrives: 6 - 7 Nov.

Fastest delivery: 2 - 4 Nov. Details
Ships from and sold by Amazon US.

Take VR experiences to the next level with the Acer Mixed Reality Waterproof Foam Replacement 12mm. Remove your old stock foam and replace it with our easy to clean waterproof version. Designed to be wiped clean between uses with antibacterial wipes these foam pads are perfect for sharing the headset whether at events or at home.

• Easy to wipe clean between uses
• More comfortable fit with space for your nose between the lenses.
• Soft PU leather feels great on the skin

Troy Bond
4.0 out of 5 stars Works in a pinch, emphasis on pinch.
17 April 2020 - Published on Amazon.com
Verified Purchase
I have an HP Mixed Reality headset from a couple years back, and it came with one foam headrest, or whatever you call them. As you might expect, it has degraded over time, and I've never managed to find an appropriate replacement for it. So I decided to give these a try in the hopes it'd be close enough.

I am happy to report that they are, in fact, "close enough." Is it a perfect fit? Not at all. Does it do what I need it to do? Yes. What's more, the material gets less funky than the overly-porous foam version I originally had. It doesn't perhaps breathe as well, but it seems like a fair tradeoff for less funk and embedded moisture. (Don't judge, Beat Saber gets pretty intense.)

My only real complaint, and it's hardly a complaint since it never claimed to be meant for my device, is that the opening ends up being a bit smaller and a little pinchy around the eyes, which is a problem for me since I wear glasses. (When I remove the headset, my glasses want to go with it. Who knows what'll happen if I get bigger glasses frames in the future.) If you don't wear glasses then it likely won't be an issue. Also the area near the nose isn't as complete, so light can get down near your nose and mouth, but to me that's a minor detail that doesn't bother me, but it's worth mentioning.

ANYway, if you have an Acer MR headset, I assume this would work perfectly for you, but even if you have an HP MR set like I do (the 1440x1440 resolution model), this gets the job done, and there are two of them so even if one gets worn out, you have a replacement. FWIW, I've yet to replace mine, and I've been using it for almost four months now. YMMV.

Oxytropis
2.0 out of 5 stars To Thin
25 July 2018 - Published on Amazon.com
Verified Purchase
Much to thin(thinner then stock) and lets in more light. I am going to try and sew and or glue my way out of this waste of money, and hopefully that should get a decent amount of cushion and reduce the leakage and not have it be a total loss.

If your dome is more oval and elongated (think Patrick Steward) you might want to pass, rounder heads (think Jack Black) it will probably fit better, either way though it still needs more cushion between your face and the hard plastic.

Jolene D Clark
4.0 out of 5 stars Nice, But not Perfect
5 January 2019 - Published on Amazon.com
Verified Purchase
I bought this for my Lenovo Explorer and it fits fine, This cover is not as comfortable as the original cover that the headset came with but is still nice. This is a definite buy if you are sharing the headset with friends and the cover is getting sweaty because this is easy to clean.

Some pros and cons
Pros:
-fairly comfortable, long use is not irritable
-Easy to clean for sweat and shared use
-easy to put on and take off

Cons:
-Small amount of light leak at the bottom (for me though it was minuscule and not even noticeable 95% of the time)
-a worse comfort than the original padding (but not by that much)
Read more

AlphaBetta
4.0 out of 5 stars Use it wisely, great product other wise.
14 January 2019 - Published on Amazon.com
Verified Purchase
This foam is great is you use it wisely, if you gonna play something inmersive and "calm" (Like Subnautica) use the stock foam, if you gonna play something active and sweat-inducing (Like Beatsaber) use this one. This thing has light leak in the nose (duh, its a give away in the picture) and in the sides IF you place it wrongly, try putting the borders a little bit more "outside" and it will solve the problem.

The nose light leak is not annoying at all once you really get in the game (Your brain just ignore it) and it promote air flow if you have a fan so you dont get all steamy inside the headset. Only downside is that the foam is not too thick so it hurts if you press your face too hard against the headset.
Read more

Josh Waters
4.0 out of 5 stars 10x better than original. (Lenovo Explorer)
12 February 2019 - Published on Amazon.com
Verified Purchase
I've been playing VR for 5ish months and in that time the original padding had separated from its Velcro making it almost unusable. I glued it back together and immediately found these pads as a replacement, two days later and wow, what a difference!

To start they are about twice as wide, allowing it to curve around the corners so it doesn't dig into your head, it is also about the same thickness as the original, maybe thicker. Im using it on a Lenovo explorer and it fit just fine, no complaints there at all.

My one complaint though is there is definitely some light bleed, a lot for me really to the point where it would have been totally distracting. But, you can fix this yourself fairly easily. I had some extra Velcro around the house and I just cur the nose bit off the original pad and added some Velcro to the nose cup and ta-da! it was fixed! You could do this with any Velcro and padding really.

Overall im super happy with it. Way more comfortable, easy to adjust, good quality. Minus 1 star for the fairly heavy light bleed I have but if you are willing to spend 2 minutes adding a nose piece then its worth it.
Read more
One person found this helpful
Go to Amazon.com to see all 28 reviews 3.9 out of 5 stars
Free & fast delivery, movies and more with Amazon Prime
Prime members enjoy free & fast delivery, exclusive access to movies, TV shows, games, and more.
> Get started
Back to top
Get to Know Us
Connect with Us
Make Money with Us
Let Us Help You
© 1996-2020, Amazon.com, Inc. or its affiliates