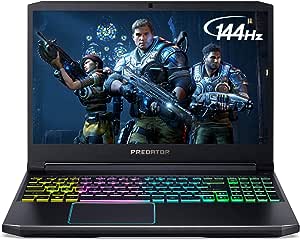 4.0 out of 5 stars
4 out of 5
2 customer ratings
How are ratings calculated?
To calculate the overall star rating and percentage breakdown by star, we do not use a simple average. Instead, our system considers things like how recent a review is and if the reviewer bought the item on Amazon. It also analyses reviews to verify trustworthiness.

Kelvin Ong
3.0 out of 5 stars Lot of problems with this laptop after few weeks
29 July 2020
Processor description: Intel Core i7 9th GenCapacity: 15.6-inchStyle: Notebook onlyVerified Purchase
This laptop really give me hard time. Randomly shut down with or without Blue Screen. Hanging at gameplay like few minutes after start up and restart again.
Read more

Brian S.
1.0 out of 5 stars BIOS settings are LOCKED! Can't change boot order, upgrade storage, or disable UEFI for Linux
8 April 2020 - Published on Amazon.com
Processor description: Intel Core i7 9th GenCapacity: 15.6-inchStyle: Notebook onlyVerified Purchase
I bought this to replace a 7 year old Linux gaming computer (dual-boot, multi-drive) with a corroded power supply, expecting to install a couple extra hard drives, while still playing a few games on the original Windows drive it shipped with. After a little research, it looked like I wouldn't have a lot of trouble installing drivers for the hardware that comes with this model, and the price was reasonably low compared with System76, so I went ahead and ordered it.

BIOS and hardware upgrades: Once the 2nd drive I ordered arrived (separate packages, couple days later), I proceeded to install the 1 TB drive along with the 500 GB drive from my old system, using the upgrade kit which came with this computer. Taking apart the computer was fairly straightforward, but because Linux requires you to disable Secure Boot, I proceeded into the BIOS to enable booting from USB and turn off Secure Boot and UEFI. The BIOS password was NOT set, and I was allowed to add one of my own, but all the settings related to security and boot order were still greyed out. Despite installing 2 additional drives, and being allowed to set a password for one of them, I was not allowed to boot from anything except the 500 GB drive this computer shipped with or any kind of external media.

I called the support number in the pamphlet that came with the computer, and asked about this, but was told that Acer locks the BIOS on all computers shipped through Amazon in order to "protect" customers from changing things that might break the computer if they don't know what they're doing. He explained that all computer vendors do this to one extent to another, such as Apple with iPhones, and refused to provide me any means to unlock it no matter how technical I am. He continued that if I want to upgrade anything, I should call Acer's main customer service line and order it from them, instead of trying to modify it myself. At this point, I demanded a refund because the item was materially different from what was advertised, and effectively unusable for my purposes as a result, but he refused because the package was already opened. I pointed out the product description did not list the BIOS being locked, and based on forum postings about this model on Acer's website, locking the BIOS did not appear to be a standard configuration for this model, but he stated that's what Acer wanted for Amazon-shipped computers, and that they're under no obligation to disclose this information prior to purchase, so I replied I will simply complain to Amazon and seek a refund through them. I did try contacting Acer's customer support number listed on Amazon, and on their own website; after a few days of trying, I did eventually reach someone (average wait time of 60 minutes), who ultimately confirmed Acer intends to limit customers' ability to change boot sequence for their "protection".

Keyboard: This was a real nuisance. The 1 key, Q key, Z key, and I think a couple others make a distinct "clicking" noise when I press them, sometimes don't press in properly, and feel like they will pop out or otherwise break within about a month or so of use. It also has some weird light-up pattern that runs from left to right and flickers a bit as soon as it lights up. Almost looks like something is wrong, and might burn out in a few months.

Battery life: While waiting for the 2nd hard drive to arrive, I played Elder Scrolls Online over Wifi a little bit. Computer was fast enough to handle it, but the battery died within about an hour, despite being brand new. Given how batteries decline over time, I worry about how it will perform after a few years.

Screen quality: Says it's 1920x1080, but looks a little pixelated, which is kind of weird. I don't know how to describe it, but the pixels look a little larger than I'd expect, and the computer defaulted to a lower resolution out of the box for some reason. Nothing too special or standout-ish, I've seen better, but also not terrible.

Chris Russ
4.0 out of 5 stars Great value gaming laptop
20 March 2020 - Published on Amazon.com
Processor description: Intel Core i7 9th GenCapacity: 15.6-inchStyle: Notebook onlyVerified Purchase
I have been looking for a laptop that can handle some gaming needs for a while. The laptop was in my amazon list for a long time and I finally pulled the trigger at the start of the Covid-19 outbreak.

Pros:
Gaming- This is what this computer is made for. It seemingly can handle most gaming tasks at recommended settings
Screen- The screen is really nice but I do wish it was a little brighter. However, the screen quality seems top notch in my limited testing of the unit.
Keyboard- The keyboard seems really nice. Button feel nice and typing on the laptop is nice and easy.
Form Factor- Surprisingly, the computer is relatively slim and lightweight considering the amount of power the unit has.

Cons
Battery Life- The battery drains quick. This should be expected considering the computer is relatively high-powered and designed for gaming.
Design- I hate the design of the computer. It really screams "GAMING" with the design. I wish it was more subtle because I am a working professional and I don't like the design.
Sound- HOLY MOLY this unit gets really loud and hot! Just playing WoW for about 10 minutes and it starts to cook and the fans get loud. If turbo is enabled then it is insanely loud.
Heat- When I purchased this machine I fully anticipated it to get hot but the heat near your fingers is really warm. Right above the function buttons near the turbo button gets extremely hot.
Speakers- Sub par and hugely disappointing. Do not get this computer if you need quality built in speakers.

Overall, I do like this machine and it does exactly what I needed it to do. The screen is amazing and the performance is really strong and I feel like it will handle most games you throw at it with ease. I got this machine to supplement my gaming tower and to have ease of access when I want to play games anywhere in the house. If the cons don't bother you then this machine is great and an awesome value.
Read more
71 people found this helpful

Cons:
The bloatware, just remove it so you have extra space.
Norton is annoying.
The battery will last maybe 3 hours, seemingly no matter how much or little you are doing.
The fans get loud and it gets hot, I plan on getting a cooling pad.

After three weeks of use it works as it should. I study and play rocket league primarily so I’m not asking a ton from it. One thing I noticed is that the FPS drops automatically to 60 if the charger isn’t connected. Maybe I need to go into settings. I also had to adjust the brightness and wear blue light glasses because it put a higher strain on my eyes than just playing with a console with a tv. Overall, I’m very happy I got this and I think it will last a while. Very sturdy, very buff graphics and gpu, and spot on price for a solid budget friendly, higher performing gaming laptop.
Read more
59 people found this helpful

Ron
1.0 out of 5 stars I hope this only happens to me.
6 May 2020 - Published on Amazon.com
Processor description: Intel Core i7 9th GenCapacity: 15.6-inchStyle: Notebook onlyVerified Purchase
After a month of waiting my laptop finally came! I was so excited! While trying to get everything booted up the screen would continually go to black. Thinking this was a fluke I continued, but I was wrong. After finally getting all of my preferences set the computer would continually go to sleep. It’s easy enough to wake up. You press a button and then enter your pin. But it just keeps going to sleep on me. Sometimes after 10 minutes of use. Sometimes after five seconds of use. It’s basically unusable in the state. I had to call customer service several times to get a hold of someone who could speak clearly enough to help me and even they suggested to just get a refund directly from Amazon.

I really hope I’m the only one this has happened to. If you get this product I hope it goes really well for you. The times that it worked it worked great! But the constant shutting off was enough to make me want to pull out my hair. Awful experience.
Read more
45 people found this helpful
Go to Amazon.com to see all 215 reviews 4.1 out of 5 stars
Free & fast delivery, movies and more with Amazon Prime
Prime members enjoy free & fast delivery, exclusive access to movies, TV shows, games, and more.
> Get started
Back to top
Get to Know Us
Connect with Us
Make Money with Us
Let Us Help You
© 1996-2020, Amazon.com, Inc. or its affiliates