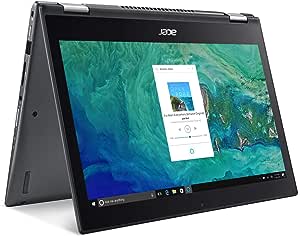 by Acer
3.3 out of 5 stars 66 ratings
Available from these sellers.

Processor Description: i5-8250 notebook
Technical Details
Additional Information
Feedback
Would you like to tell us about a lower price?
If you are a seller for this product, would you like to suggest updates through seller support?

FrisbeePat
5.0 out of 5 starsIt's THE best game-playing 2-in-1 for the price!
11 August 2018 - Published on Amazon.com
Processor description: i7-8550 notebookVerified Purchase
Background: Prior to buying the Acer Spin 5, I owned two Windows computers: a huge and heavy laptop to play games and the most famous Windows tablet for its stylus/writing capability (I teach and tutor college math). I have since sold both.

Clarification of some Acer products: Acer produces several similarly sounding machines that do slightly different things.
The "Nitro 5" is a gaming laptop without a touchscreen or 360 degree hinges.
The "Nitro Spin 5" is a gaming tablet which is nearly identical to the "Spin 5" machine I reviewed here, except the Nitro Spin 5 has design elements to appeal to gamers such as red keyboard backlighting.

Clarification of the Acer Spin 5 line: The name "Acer Spin 5" covers a whole variety of 2-in-1 laptops ranging in configurations which vary in screen size, processor, hard drive, and video card. READ THE SPECS CAREFULLY! The one I bought and am reviewing here has the 15" touch screen, 8th generation quad core i7, and the NVIDIA GTX 1080 with 4GB video RAM. It is nearly the top-of-the-line for the Spin 5; the only difference is that my configuration has a 1TB HDD instead of a SDD. I opted for this since this option kept the purchase price below 4 figures.

HDD vs. SDD: The initial boot up time for Windows 10 is much slower with an HDD. It takes well over a minute from a cold start. Other machines that I have owned with SSD's boot in less than half a minute; in some cases, less than 15 seconds. However, once the system loads Windows, the system runs fairly quickly and the lag is not noticeable, except when loading very demanding games. The upside of my choice is that it's 1 TB of storage. Most tablets or 2-in-1's have a small fraction of that for storage.

Gaming: I doubt you will find a better game playing tablet for under $1k. I don't play a lot of the latest games but every modern one I have tried on this machine generates high frame rates at high graphics settings. I have always been a gamer that would sacrifice graphics for frame rates but with this machine, I have not needed to do so for any game in my library, which includes the newest Tekken. As mentioned, the only downside is that with the HDD, games tend to initially take longer to boot up. However, once they do load, they run at top speed with high graphic settings.

Laptop usage: I also use Office and some sophisticated mathematical programs for my side work in web analytics. The 8 GB of RAM and the 8th Gen i7 combine to make a very speedy number crunching system. The keyboard is pleasant for typing, and I love having a dedicated numeric keypad for data entry.

Tent mode: The screen can be flipped backwards to form a "tent," the purpose of which is to watch video content as a touch screen. I bring it up to note that I found the viewing angles are superb; the display is still sharp at some rather extreme angles. The only downside is that depending on the angle and room lighting, there is some reflection.

Tablet mode: Yes, a 15" tablet is rather large and some might find it heavy. I don't find this to be the case. I enjoy having a large writing area for helping students solve math problems. I can lay it flat like a piece of paper, or prop it up in tent mode to use like a blackboard. Speaking of writing, it's not well advertised but the Acer Spin 5 supports the optional Acer Active Stylus. In my testing, the stylus works very well with writing programs like OneNote, much better than using a cheap rubber-tip stylus. If you are turned off by having to buy the Acer stylus, consider this: the purchase price on the most famous Windows tablet covers the tablet only. You have to spend at least 3 figures combined to buy their keyboard and stylus.

Miscellaneous: The Dolby Audio is superb for a laptop/tablet. There are 3 standard USB ports and 1 mini 4-pin USB. This is a lot for a tablet, some have only one USB. There is an SD card reader but I almost never have a use for card readers. For video output there's an HDMI port. For audio there's a single headphone jack, but a pleasant surprise is that when I plug something into it, the computer asks what kind of audio device it is (headphone, headset, microphone, etc) so I imagine the port has multiple functions. All ports are on the sides; none in the back or front which I believe is ideal. The touchpad is actually a clickpad and has plenty of real estate (I prefer either using a Bluetooth mouse or the stylus as a mouse), plus a fingerprint reader for secure login which works well in my testing (after config, it has not failed yet).

Bottom line: in more than 2 decades of laptop ownership, I've never owned as complete a system as this one. I can't strongly recommend it enough!

Nick
4.0 out of 5 starsYou wont find a better deal on a 2 in 1
4 October 2018 - Published on Amazon.com
Processor description: i7-8550 notebookVerified Purchase
The hardware this machine packs in for under $1000 is impressive. An i7 with a 1050 make a great pair to run even new triple A titles. That is not the point of owning a 2 in 1 laptop though. You will find many cheaper "gaming" laptops, all of which will blow this device out of the water for performance, but again this is not a gaming device. This is a multi function device that will handle anything you can throw at it. Although it is limited by the max of 8gb of ram, windows 10 does a good job at managing it.
The only flaw I have come across is the dated 1tb spin disk drive. This device does have an nvme capable m.2 slot, so I put in a WD 500gb nvme drive. This is now the laptop that I wanted. Working in IT I hate slow computers. Boot up with an NVME is under 8 seconds, the finger print reader is extremely responsive and accurate which makes signing in even faster.
The battery life is average considering the hardware included in the form factor. Generally 4 hours is my average with mixed use.
The touch screen is quick to respond, and does work with Acer's active stylus, the touch pad runs windows precision drivers, so does support the windows 10 gestures. This makes it very easy to navigate with only the touch pad.

This model is an almost clone of the gaming acer spin 5 nitro, that device however includes an NVME SSD installed. It also comes in at $1150 with an i7. For the money saved and with disk prices dropping this is the machine to go with.
Read more
24 people found this helpful.

rmr
2.0 out of 5 starsDo you like molasses? ADDENDUM II
21 March 2019 - Published on Amazon.com
Processor description: i7-8550 notebookVerified Purchase
I've been purchasing computers since the early '70's. This is the first computer EVER that I disliked right out of the box. It is soooo slow. Click on something... go get a drink... check the mail... come back to see if its yet responded (VERY slight exaggeration). It probably has some good points but, the slowness is all I can focus on. BTW - my previous laptop was a Spin 3 which I'm extremely happy with (runs circles around this Spin 5). Oh yes, and it drops the internet 3 or 4 times a day. Not the Wi-Fi connection; just the internet. Have to disconnect then re-connect. Spin 3 sitting right next to it doesn't do this. Not sure if it's just the Spin 5 or if the whole Acer family has gone down hill as a brand. I can't afford to find out.

ADDENDUM: 20 July 2019 - After taking my Acer to the local repair shop... with no resolution, I contacted Acer. They repaired it under warranty. They had to replace the hard drive. I am now a happy camper.

ADDENDUM II: Didn't take long for the computer to return to doing it's molasses imitation. I will never again buy Acer.
Read more
9 people found this helpful.
Go to Amazon.com to see all 52 reviews 3.3 out of 5 stars
Free & fast delivery, movies and more with Amazon Prime
Prime members enjoy free & fast delivery, exclusive access to movies, TV shows, games, and more.
> Get started
Back to top
Get to Know Us
Connect with Us
Make Money with Us
Let Us Help You
© 1996-2020, Amazon.com, Inc. or its affiliates