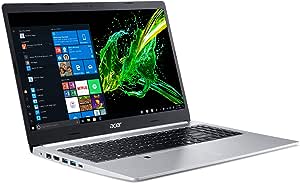 Style: Laptop
Technical Details
Additional Information
Feedback
Would you like to tell us about a lower price?
If you are a seller for this product, would you like to suggest updates through seller support?

Dave and Kym
5.0 out of 5 starsExceeded expectations almost everywhere.
14 July 2019 - Published on Amazon.com
Style: LaptopVerified Purchase
Bought this unit as a budget replacement for my fairly high-powered Dell desktop which was lost during flooding. I wasn't expecting much from a $500 laptop but just needed something to get me reconnected.

Setup was a breeze, setting it to my preferences was simple, removing the (modest) bloatware from Acer was easy and I was pleasantly surprised at the quickness of the unit. The memory and drive appear to be easily and inexpensively upgradeable but it functions flawlessly right out of the box.

I wasn't paying for or expecting gaming-quality graphics but the display renders internet and video perfectly. Those that find fault with this unit must be comparing it to others costing 2 to 3 times as much. I wholeheartedly recommend it to anyone seeking a laptop to take care of their basic computing needs.

Update from 10 days later: Been using it relentlessly and comparing it to my desktop, which had far more memory, storage and graphics capabilities, and I am honestly thrilled. I was thinking of using this as a bridge-unit until I could go back to a new desktop but am seriously rethinking that. The thing that really impresses me is the boot-time. This guy goes from powered down to browsing in about 30 seconds. Not sure if that's just the SSD or newer CPU but I am loving it.

Pretty sure I'm going to start using this as my main and adding a docking station, keyboard/mouse (of course), monitor, a bit more memory and storage, and just rolling with it. Disclaimer: I am not a gamer and I understand this machine won't do complex graphics.

Update 2: Just to see if it would work, I installed a $65 16GB memory card to bring the total RAM to 20GB, the maximum Acer allows for the unit (it comes with 8GB but you have to remove a 4GB card to upgrade). It worked flawlessly and it is now far zippy-er than my Dell. From what I've read, the extra memory allows it to run cooler and hopefully adds to its service life.

Update 3 (I promise this is the last). Thrilled with this little budget-monkey. Restart time, 25-30 seconds. Startup from shut down (not sleep), 12-15 seconds including pin-entry time. Kicking it up to 20GB memory really helped. For anyone that wants to try this stunt (and possibly void the warranty) all it takes is a plastic spudger (google it) and a small Phillips head screwdriver to take the back of the laptop off. 16GB memory cards are readily available from Crucial and Memorystock, usually on Amazon.

The video that gave me confidence to try it was on YouTube but it showed how to add a hard drive, not a memory card. Older Acers had a removable panel over the memory but on the Acer Aspire 5 A515-54-51DJ, you have to take off the whole back. Don't even try it if you are confused about which end of a screwdriver to use or never read instructions.

A final note about some of the drama-queen reviewers that complained that "it gets so hot" or "the fan sounds like a 747 taking off": Just because it's called a laptop doesn't mean you should use it on your lap covered with your fleece blanket blocking the air vents. Use mine on my desk and on the rare occasions that the fan kicks on under heavy use it makes a gentle whirring sound, barely noticeable.

If it died tomorrow, I'd buy another.

Update 4 (OK, I lied). After upgrading the memory and performing every performance-enhancing trick I could find on the internet with Windows, apps, settings and everything else, I started testing my budget computer. The most comprehensive free test I found was from UserBenchMark and I was kinda proud of the results. The test results can vary depending on the state of the computer but here was my best test (the others were pretty close):

"Overall this PC is performing way above expectations (95th percentile). This means that out of 100 PCs with exactly the same components, 5 performed better. The overall PC percentile is the average of each of its individual components. This PC is likely operated by a technical master!"

Did you hear that? I'm a technical master! All kidding aside, this $500 budget unit is working so far above my previous desktop that I'll never go back (sorry, Dell). I read that the average laptop only lasts 3-5 years before needing replacement. I'm OK with that and my next unit is definitely going to be a graphics-improved version of this machine, hopefully Acer.

ttview
1.0 out of 5 starsTerrible.
29 June 2019 - Published on Amazon.com
Style: LaptopVerified Purchase
The fan noise on this laptop is so bad that when you first hear it you're going to think your next door neighboor is using a leaf blower outside. I DARE you to tell me i'm wrong. I have an Acer aspire E15 and an acer aspire 5 (5504) and the fan noise combined from those two laptops are less than 1/8th the loudness of this new laptop. IT IS TERRIBLE. Think you can live with that? There's more: If you're a long time user of acer products you've become used to the 2nd function keys being assigned between the F3 to F9 keys and in blue. Thats GONE with this laptop. Here's the new configuration. F1 (previously f4) is the sleep function key, F2 (previously unassigned) is now airplane mode/wifi disable key, F3 and F4 (previously wifi and sleep respectively) are to adjust screen brightness, F8 (previously mute function key) has switched places with F9 now serving the keyboard backlight on/off function, F9 (previously keyboard backlighting function) is actually the mute function key. F10 and F11 (previously unassigned) are now the volume down and up function keys respectively. Just to add some additional frustration to the mix none of these keys are the second function anymore. So if you're used to hitting F5 to refresh browser windows or F3 to search now you'll need to hit the Fn Key first as the media functions take precedence in this new keyboard layout. This can actually be changed by rebooting and pressing F2 to enter the bios settings before windows loads. Even if you change the F1 - F12 keys back to their original hierarchic order the arrow keys are no longer the keys to access brightness or volume control but instead are music media keys. Good luck with that confusion. This new laptop basically is an all out attack on keyboard shortcut users even the Home key is now a point of frustration since they removed the dedicated home key and you're only left with the numlock access only home key that shares functionality with the number 7 key on the keypad. I also had to finish install necessary driver level software like the "acer quick access application" because as this was not installed there was no way to know if num lock or capslock was engaged as there is no LED indicating the status of these keys. Even if you Update the bios to the latest firmware version like I did it still won't solve the problem of the USB 3.0 ports having slower read/write speeds than a typical USB 2.0 port.
Anyway At least THANK GOD on the plus side as a result of all that fan noise you do get ample cooling so the laptop does stay nice and cool..... HAHAHHAHAHAHAH PSYCH NOOOOOOOOOOOO no such luck my friend this laptop gets VERYYYYYY HOTTTTT in your lap and it is just pathetic that for all the fan noise you have to deal with it can't even keep the laptop at a comfortable temp while sitting there idle without a single thing going on. The charger is also not the regular acer charger so if you have other acer laptops that can share chargers interchangeably this one will not work with them. BTW this is all within the first half hr of use. Imagine what I'll discover by this time tomorrow. Seriously guys and gals if you're a long time acer product user and you've become accustomed to any level of consistency across their products just forget it with this laptop. I currently use the A515-51G-5504 aspire 5 for productivity and while you may think that the only difference between the two is that one has a dedicated graphics card and the other does not TRUST ME those two laptops are like NIGHT AND DAY different when it comes to speed, noise levels, and general build quality. I cannot overemphasize how much you should AVOID buying this laptop. You are going to HATE IT!
Read more
382 people found this helpful.

Amazon Customer
5.0 out of 5 starsGreat Laptop! Couldn't be happier
11 June 2019 - Published on Amazon.com
Style: LaptopVerified Purchase
I spent hours looking for a nice and affordable laptop and this Acer Aspire is what I landed on.

Things that were important to me:
- Price ( Around $500)
- Speed (i5 or better)
* The new Intel i5 processors can turbo boost from 1.6ghz up to 3.9ghz without overheating. This computer is fast!!
- Backlite Keyboard
- Screen Size 15.6in or greater
- Memory
- Thin and light
- Aluminum

Met all my expectations and more

The only con, and this is being nit picky, is that the fan vent is located under the laptop. If I have the laptop sitting on my lap for awhile and I start to hear the fan working hard, I try to prop up so the vent can breath.

Otherwise, I'm very happy with this purchase.
Read more
287 people found this helpful.
Go to Amazon.com to see all 831 reviews 4.0 out of 5 stars
Free & fast delivery, movies and more with Amazon Prime
Prime members enjoy free & fast delivery, exclusive access to movies, TV shows, games, and more.
> Get started
Back to top
Get to Know Us
Connect with Us
Make Money with Us
Let Us Help You
© 1996-2020, Amazon.com, Inc. or its affiliates