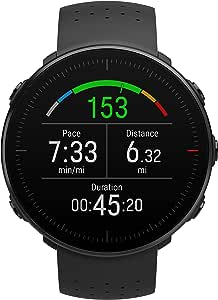 Challenge your limits with Polar Vantage M, an all-round multisport & running GPS watch for anyone who loves setting new records. This slim and lightweight training companion provides you with all the data you need to improve your performance.

Track your workouts, analyze your progress and achieve more with Polar Flow – your complete training platform available on desktop and mobile

Challenge your limits with Polar Vantage M, an all-round multisport GPS watch for anyone who loves setting new records. This slim and lightweight training companion provides you with all the data you need to improve your performance in all your favorite sports.

There are 0 customer reviews and 2 customer ratings.

JPS
1.0 out of 5 stars Not Accurate Compared to Strap
17 November 2018 - Published on Amazon.com
Size Name: M-LColour Name: BlackVerified Purchase
I have been a dedicated Polar user for years as a competitive athlete. I still use my Polar M400 with great success; however, I was really hoping to ditch the strap after 15+ years. Below are some pros and cons that I found:

Pros
1. I do like the button layout since this is the standard (or has been) for Polar so if you’ve been using Polar, it’ll be much easier to adapt.
2. I’m not a fan of touch screen watches. I train to train, not to play around with watch faces. I completely get the fitness enthusiast that wants a fitness/smart watch they can wear all the time. I probably like this watch’s button navigation process because it’s what I’m used to in prior HR watches.
3. It has a clean look. Much better looking than the older Polar watches or those space-age looking watches. It might be a little big on someone with thin wrists.

Cons
1. HR measurement is not accurate. I did multiple comparison tests with my Polar M400 strap watch, with several different types of training modes, and readings were erratic. HR readings were closer to what the strap gave when there was less distal movement or wrist movement. At rest it was close (most of the time) but once I started to increase my movement and exercise intensity, the readings were inconsistent. For performance based training, this would NOT be a good choice.
2. Kcalorie expenditure was off by at least 20% (lower than strap monitor). This makes sense if the HR readings were off. For those trying to gain or lose weight, it would NOT be a good choice either.
3. In my opinion, the size of the watch is fine for a man’s wrist, but may be large for a woman’s. Of course, this is completely subjective since I do know some women that now like larger watches. Keep in mind that most comparable watches from other competitors are similar.
4. The sync and customization options are limited, even when you use the computer app, which has slightly more options than the watch and phone app set-up. I would love to be able to lock the screen so I don’t inadvertently hit a button that might pause the session, or whatever.
5. I’d love to have a brighter screen and a way to keep the light on. It does turn-on with a flip of the wrist, but it’s not always reliable and I don’t always need to turn my wrist to want that.
6. The charger is horrible. Rather than a straight forward wall-to-watch plug, its some fancy magnetic connector. The USB cord from the wall extends to a magnetic attachment which easily detaches from the watch if its not laying on the watch face. Hard to explain but you'll have to look at some of the online videos to get it.

Just a note: I did the same comparison testing with the Garmin VivoActive 3 (versus Polar M400), and it was just as bad. In fact, for fun, I got my hands on a FitBit Alta HR and it actually had better readings than the Garmin or Polar; but still not accurate enough for me. Either way, I don’t think they’ve perfected this wrist based technology yet. I questioned it's accuracy when it first came out but after reading an article saying it was very accurate compared to the "old strap" monitors, I thought I'd give it a try. I was really hoping this would be it; I REALLY want to ditch the chest strap...but not willing to sacrifice accuracy. Perhaps the watches at a much higher price-point work better, but I’d guess it would be the same. My next step is to test the arm strap.

PGZ
5.0 out of 5 stars Best GPS Watch on the Market (I’ve tried them all!)
9 November 2018 - Published on Amazon.com
Size Name: M-LColour Name: BlackVerified Purchase
I was torn between the Vantage V and the Vantage M. Since I don’t do much more than running I opted for the M. This is the most comfortable watch I’ve worn and the wrist based heart rate is way more accurate than my current Garmin 235. It was easy to set up (thumbs up to Polar for the ability to customize the screens right from the Flow App!), accurate heart rate and GPS, and the color screen was easy to see while running outdoors. Couldn’t be happier
Read more
60 people found this helpful

Amazon Customer
5.0 out of 5 stars Performance-focused, sleek, comfortable; best watch I have ever owned
12 December 2018 - Published on Amazon.com
Size Name: S/MColour Name: WhiVerified Purchase
As an avid trail and road runner (running 80-100 mi/week), I cannot review this watch highly enough. Having trained in a variety of watches over the years (Garmin, Suunto, Epson, and Polar), this watch is by far the best. The battery lasts forever before recharge, it is easy to figure out how to use, and it has all of the relevant features (HR, current pace, average pace, POWER!!!, splits, elevation, etc). As a trail runner, the new power metric has been extremely valuable since it is the only metric that remains constant through hills (HR goes up, pace goes down, power stays the same). Moreover, the watch is comfortable enough to sleep in, and is sleek enough to wear to work in a professional environment! I really have no critiques at this point and would recommend to anyone looking for a performance-oriented, good-looking, comfortable watch.
Read more

Tap Dancer
3.0 out of 5 stars Solid watch, but HR tracking not consistent for all exercises
18 November 2018 - Published on Amazon.com
Size Name: S/MColour Name: WhiVerified Purchase
Overall, i really like this heart rate monitor, the only flaw is that it does not track my heart rate correctly 100% of the time. I bought it to replace a very very very old Garmin. I think the ability to wear it 24/7 and track your activity + sleep is 'fun', but not why I bought it. I just needed to track my workouts and heart rate.

Some Pros: I think it is a good looking watch. The interface is easy to use, and I love all the sport profiles that are available. My favorite thing so far has been the ability to buy this in a small. I have very small wrists, and it's a luxury to be able to get it tight enough with out a long tail on the wrist band.

Cons: My only con is that it does not track my heart rate correctly for all sports. It works just fine for weight training, pilates and indoor cycling. But when I wear it to walk or do the elliptical it is wildly inaccurate. Based on reading another review, I think it has trouble reading it correctly when I have a lot of arm movement. Therefore, I will be buying a strap to monitor my HR during these activities. Admittedly, it would have been convenient if the HR tracking via my wrist worked 100% of the time. But I was skeptical about this from the beginning, so I'm not shocked there are issues.
Read more
42 people found this helpful

Girl mom
1.0 out of 5 stars Display was much too dark
9 November 2018 - Published on Amazon.com
Size Name: M-LColour Name: BlackVerified Purchase
Maybe I got a defective unit, but the display was much to dim. There is also no adjustment available in the settings. I suspect this is the main reason for the better battery life, but after using a variety of polar and fitbit products, I found this unacceptable. Really disappointed since I've been waiting for the Vantage for awhile now. I love polar products, but I'm sitting this one out until it improves. Wore for a day and returned.
Read more
38 people found this helpful
Go to Amazon.com to see all 157 reviews 3.8 out of 5 stars
Free & fast delivery, movies and more with Amazon Prime
Prime members enjoy free & fast delivery, exclusive access to movies, TV shows, games, and more.
> Get started
Back to top
Get to Know Us
Connect with Us
Make Money with Us
Let Us Help You
© 1996-2020, Amazon.com, Inc. or its affiliates