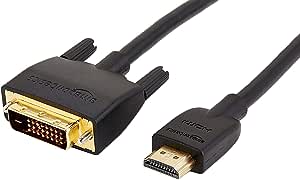 Size Name: 10 Feet | Style Name: Single Pack
Technical Details
Additional Information
Feedback
Would you like to tell us about a lower price?
If you are a seller for this product, would you like to suggest updates through seller support?

Take your gaming or home-theatre system to another level with the AmazonBasics HDMI to DVI Adapter Cable - 10 Feet. This 10 feet cable will even connect HDMI-equipped devices like Blu-Ray, PlayStation 3, or Xbox 360 to a DVI-equipped monitor or TV. This cable can be used to connect your computer or DVI-equipped device to an HDMI-equipped HDTV or display.

Watch videos from your laptop on your large-screen HDTV-or the other way around. The cable's extra mesh jacket offers an additional layer of protection and increased cut resistance to the regular cable jacket and ultimately to the inner cable

Laura0806
5.0 out of 5 starsAmazon basics does it again
3 November 2017 - Published on Amazon.com
Size Name: 3 FeetStyle Name: Single PackVerified Purchase
A fraction of the price of similar cables, this was solidly built, with very solid connectors. Worked perfectly to connect an older monitor with dvi to my laptop with hdmi out. No loss of image quality. If you have a slightly older monitor without an hdmi in, this is for you! I attached a picture of the female side your monitor will needs (it’s the universally brown one, NOT the blue one!)
Read more
112 people found this helpful.

Ashley C.
5.0 out of 5 starsPerfect fix for me!
14 June 2016 - Published on Amazon.com
Size Name: 3 FeetStyle Name: Single PackVerified Purchase
First of all I really want to thank the community for answering my questions about this cord before I purchased it! It was really helpful to me! Okay so this cord is exactly what I needed to connect my desktop tower to my Sony smart tv. I plugged the DVI end into my computer and plugged the HDMI into the port on the TV and it worked perfect. The reason I needed this cord was because my computer doesn't have HDMI and the TV only has HDMI. I have been trying out different VGA converter cords before trying the DVi, and none of them had worked at all. So I am very happy that this one finally worked! My computer runs windows 10, which I think is why the VGA cord wasn't working. Perhaps something to do with a driver or something? Now the only thing is that this cord will NOT transfer sound. This is a video cable only. You will have to use either a aux cord directly to your tv or to an external speaker. But this cord does exactly as I was told by the community members as well as the description by the seller.

If you have found my review helpful, especially if you are in the same situation, please let me know.

Amazon Customer
5.0 out of 5 starsGood quality cable at a very cheap price.
18 June 2017 - Published on Amazon.com
Size Name: 6 FeetStyle Name: Single PackVerified Purchase
Exactly what I needed to add a 3rd display to my son's gaming PC. The graphics card on the PC has HDMI, VGA, and DVI outputs. I used this cable to connect my LG HDTV for use as an overhead display.
Read more
52 people found this helpful.

Homers Odyssey
5.0 out of 5 starsRemove that VGA-to-VGA cable, and use this for your computer's HDMI port and connect your DVI-capable monitor.
30 September 2017 - Published on Amazon.com
Size Name: 10 FeetStyle Name: Single PackVerified Purchase
I have four Acer 22-inch monitors, and the 16:10 aspect ratio (1680x1050 res) never did work well with the VGA ports on any video card I've used. The monitors automatically and correctly pick native resolution whenever data runs through the monitor's DVI port, whether from DVI output from the computer, or via an HDMI-to-DVI or DisplayPort-to-DVI cable.

Besides the OEM video card on my home computer (which supports DVI, HDMI and VGA outputs), I installed a Radeon HD5450 PCIe1x which I also purchased from Amazon (DVI, DisplayPort and VGA outputs). Great card, by the way.

This cable was the answer for my monitor on the far left, now fed by the resident card and its HDMI ouput. I removed the VGA-to-VGA cable, installed this HDMI-to-DVI cable, and back to native resolution and proper color table selection.

The Hong Kong skyline stretching from left to right on my four monitors now looks great!

Jared Nelson
1.0 out of 5 starsIt seems like there may be a error in the hdmi/dvi communication ...
18 April 2018 - Published on Amazon.com
Size Name: 10 FeetStyle Name: Single PackVerified Purchase
Out of all the combinations of 3 different computers and 5 different monitors, this cable only worked 1 and a half times and never at the correct resolution. The first time I managed to get it to work was with a computer that didn't have graphics drivers on it, and it stopped working as soon as I installed video drivers onto the computer. Another ten combinations later and I finally get it to work with the DVI side plugged into a monitor with corrupted firmware on it and the hdmi side plugged into my graphics card (same set up did not work on the computer without a gpu) and it finally detected a signal, but only for a really low resolution. It seems like there may be a error in the hdmi/dvi communication protocols that prevents the monitors from detecting a signal or the computer from detecting a monitor in most cases. Based on my experience, I would not recommend anyone buy this product, because even if you get really lucky and get a picture, chances are it won't be an acceptable resolution.
Read more
22 people found this helpful.
Go to Amazon.com to see all 5,326 reviews 4.6 out of 5 stars
Free & fast delivery, movies and more with Amazon Prime
Prime members enjoy free & fast delivery, exclusive access to movies, TV shows, games, and more.
> Get started
Back to top
Get to Know Us
Connect with Us
Make Money with Us
Let Us Help You
© 1996-2020, Amazon.com, Inc. or its affiliates