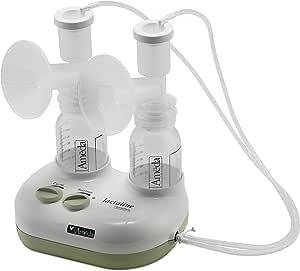 by Ameda
4.0 out of 5 stars 409 ratings
Secure transaction
Returns Policy
Amazon Delivered
Your transaction is secure
We work hard to protect your security and privacy. Our payment security system encrypts your information during transmission. We don’t share your credit card details with third-party sellers and we don’t sell your information to others. Find out more
Amazon Delivered
Amazon directly manages delivery for this product. Order delivery tracking to your doorstep is available.

Ameda manual breast pumps are an excellent choice for mothers who pump their breast milk occasionally. The new ergonomic manual pump handle is based on the original design that earned the High Design-Innovation Quality Award from Design Zentrum Nordrhein- Westfalen Germany.

R. Stewart
3.0 out of 5 stars Some pump problems, but great Ameda customer service
9 July 2013 - Published on Amazon.com
Verified Purchase
I have now owned 4 of these pumps, all the same model. My plan was to have 2 pumps: one for home and one for office. I chose this pump to replace an aging Medela Pump In Style (that I had gotten as a hand me down from a friend). I chose the Ameda for several reasons. First, it's a closed system, so no worries about milk in the pump, contamination, mold, etc., (such problems have been reported with Medelas, which have an open pump system). Second, this pump is a lot smaller & more portable. I knew I'd need to take it on travel. The Medela PIS is such a pain, since it's embedded in a bag or backpack, and it's just huge and cumbersome. This pump has been great to just put in a suitcase. I also like the design, with the two bottle holders on the top. So, I had 2 pumps. One worked perfectly from the get-go, though I found the suction to not be as powerful as the Medela PIS. The second pump, however, worked terribly. It did not produce enough suction for a letdown, or if it did, it would lose suction and not pump milk out. I called Ameda, they did a little phone troubleshooting, and sent me another pump ASAP, no hassle. I think I got it by Fed Ex the next day. They also arranged to have the defective pump picked up by Fed Ex. However, the new pump was also defective. It would start out with good suction, and then would lose suction. I was using all the same pump parts as with my "good" Ameda, so it wasn't that. The motor also sounded different. Again, I called Ameda, they troubleshot, and sent me a new pump ASAP. Finally, this fourth one works fine, just as well as the first one that I purchased. So, overall pros: closed system, small, portable size, adequate suction for most people (when pump works properly), more affordable than Medela, excellent customer service from Ameda. Overall cons: suction is not quite as strong as Medela- I have to turn the speed & suction all the way up, it takes a bit longer to empty both boobs, and it's not as variable or able to be fine-tuned as much as a Medela PIS, and the obvious problem with getting two defective pumps in a row. Because of the 2 defective pumps, and the not-as-strong suction, I just can't give more than 3 stars for the product. If this 4th pump didn't work, I planned to buy a new Medela PIS.
Read more
7 people found this helpful

whitman107
3.0 out of 5 stars Decent to use but broke twice in 8 Months.
29 December 2012 - Published on Amazon.com
Verified Purchase
I got Ameda Purely Yours, because it was the only dual electric I could find with a a closed system so there would be no mold/moisture in the tubes/motor issues, but also because it was significantly less expensive than the next name brand.  My initial impression was very positive except for a few things...

2) The dials  look like you have an infinite range of settings for speed and strength options, but really there are only 4 settings under each dial.  I would much rather have the dials have true ticks for each setting, than try to fool me into thinking there were more.

But the Ameda did the job for me three times a day  for about 4 months until it broke.  Ameda customer service was adequete but since I need to pump every day at work and needed an immediate replacement so I ran to the store and  the only one immediately available was the horribly expensive Medula Freestyle.  It is great to have a spare pump now, particularly one that is solely battery powered, and I have not have the suction issues other people have had with the Freestyle, but so much for pumping saving us money!  I still preferred using my replaced Ameda to the Medula, until it broke AGAIN at 8 months!!  Waiting on that replacement now and so very glad I already had a second pump.  Lastly, after many months pr extensive use of two different pumps, it is very obvious during use that the Ameda gives inconsistent pressure compared to the Medula, even after replacing the entire hygiene kit.

After all this would I buy it again?  Probably not.  Particularly now when there are other closed system pumps on the market, or I would have bought the Medula Pump In Style and tried to mitigate the moisture/mold issue.

JBHTx
4.0 out of 5 stars Good, reasonably priced pump
16 January 2013 - Published on Amazon.com
Verified Purchase
I had to pump right out of the hospital because my baby was in the NICU for the first few days and wouldn't latch after she was given bottled formula. I had done extensive research on breast pumps before my baby was born, but had only purchased a hand pump because I didn't expect to have any trouble nursing. As soon as I got home, I ordered the Ameda Purely Yours. The other option was of course the Medela Pump in Style, which I found to be way too expensive and had read bad reviews about mold growing in the pump. The fact that the Ameda was a closed pump system really appealed to me, and the price didn't hurt either. I also didn't think I needed a special carry bag or cooler for it - I have plenty of bags laying around the house if I need to transport it, and I have a small cooler I use for lunches if I needed to store milk on the go. So this pump was perfect for me.

It worked well for the first few days but because apparent that I needed to order a different size flange in order to pump comfortably. Luckily Ameda makes other flanges for this pump. However, I have noticed that the suction suffers significantly when using the new flanges. Bummer.

The price, ease of clean-up, and overall value definitely make up for the suction issue. I'd still recommend this over the Medela. I used a hospital grade Medela while still in the hospital and I still prefer the Ameda to that $1000+ pump.
Read more
One person found this helpful
Go to Amazon.com to see all 401 reviews 3.2 out of 5 stars
Free & fast delivery, movies and more with Amazon Prime
Prime members enjoy free & fast delivery, exclusive access to movies, TV shows, games, and more.
> Get started
Back to top
Get to Know Us
Connect with Us
Make Money with Us
Let Us Help You
© 1996-2020, Amazon.com, Inc. or its affiliates