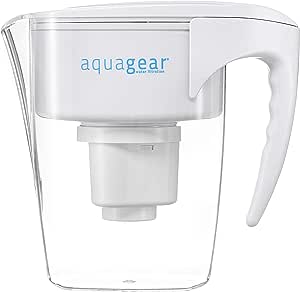 by Aquagear
4.3 out of 5 stars 4,432 ratings
Secure transaction
Returns Policy
Your transaction is secure
We work hard to protect your security and privacy. Our payment security system encrypts your information during transmission. We don’t share your credit card details with third-party sellers and we don’t sell your information to others. Find out more
Currently unavailable.
We don't know when or if this item will be back in stock.

Filtered water saves lives. For every purchase, the Aquagear Foundation provides 6 months of water to someone in need with biosand filtration. Better water for your family = better water for theirs.

We want the best experience for Aquagear drinkers. Our products are 100% BPA-free, vegan, and recyclable. To keep Aquagear sustainable, we provide postage to send back your filter for recycling.

Max
1.0 out of 5 stars A SCAM! Fails to remove the chlorine taste from the tap water
11 June 2018 - Published on Amazon.com
Verified Purchase
Cons:
Chlorine taste in the water remains !!!
The user has to wait for the filtering to finish before pouring.
It is not possible to see how much water is filled up.
Price 69.95 is too high.
The main problem the chlorine taste remains in water after filtering. I believe it is because the water flows through the filter too fast - as a chemist, I really doubt at this high speed the system can filter out what it promises: chlorine, fluoride and all other contaminants.
Seems like a scam to me.

UPDATE: Yep, looked at the reviews: someone even used fluoride testing kits and proven that the claims are false!
It is a SCAM!

I check carefully for leakage each time--there isn't any.
Read more
1,199 people found this helpful

S.T.
3.0 out of 5 stars Flaws, but water tastes great - I bought two!
13 April 2016 - Published on Amazon.com
Verified Purchase
I have mixed feelings about this pitcher. It's well designed, and the water tastes phenomenal, better in fact than the bottled waters (yes, I've tried voss, smart, alkaline and other 'fancy' waters). However, the flow rate on the filter goes from 'wow that's pretty slow,' to 'I guess I'll go watch 5 seasons of the wire' within a few days of moderate use. After a month of use, it takes around 3hrs for water to filter through a topped off upper reservoir. This needs to be done twice to fill the pitcher. So the wait is obnoxious at best, when all I want is to fill my water bottle before work - great water is one of the few pleasures I can look forward to during my busy days.

That said, it's really good water, so I've now bought a second pitcher to double the fun of watching water trickle through at a rate slightly faster than glaciation and somewhat slower than plate subduction.

If anyone from aquagear is reading this, make a faster filter, or sell a larger model with a big reservoir so I can fill it once a day and forget about it.
Read more
2,215 people found this helpful

The set up was fast and easy, including the flushing of the filter, all taking less than 3 minutes. I love the pour spout feature, which allows “hands free” filling up with water and the water tastes amazing.

I can’t believe anyone would complain about the flow rate because the flow rate is fine. The Brita has faster flow rate but who cares if the Aquagear takes one minute longer to fill up when you are getting 2000% more contaminants removed?

And what other product removes close to 100% of Chlorine, Flouride, Lead, Chomium 6, Mercury, and Trihalomethanes? I think most people already know about the dangers of Flouride, Mercury and Lead in their water, so let me point out the ill effects of the lessor known contaminants: Chloramine, Trihalomethanes, and Chromium 6 that the Aquagear takes head on as well:

Chloramine:
Water utilities across the country are changing the way they treat our drinking water. They’re switching from chlorine, the primary disinfectant used in drinking water systems for over a hundred years, to the alternative disinfectant chloramine at an alarming rate. According to “Citizens Concerned About Chloramine”, chloramine causes problems with your immune system, respiratory, skin, digestive and gastric, kidney and blood.

Trihalomethanes:
According to the EPA, The use of chlorine to disinfect water for the purpose of drinking produces low levels of various disinfection by-products with the trihalomethanes and haloacetic acids being the most common. The EPA states that “Some people who drink water containing total trihalomethanes in excess of the MCL over many years could experience liver, kidney, or central nervous system problems and increased risk of cancer.”

Chromium 6:
We can thank Erin Brockovich for bringing Chromium 6 into the light of day, but despite her efforts Chromium 6 is still a major issue in our drinking water and not well known by the general population. A recent report by the nonprofit research and advocacy organization Environmental Working Group (EWG) says that nearly 200 million Americans across all 50 states are exposed to unsafe levels of chromium-6 or hexavalent chromium, a heavy metal known to cause cancer in animals and humans. Human studies by government and independent scientists worldwide have definitively established that breathing airborne chromium-6 particles can cause lung cancer, and the U.S. Occupational Safety and Health Administration sets strict limits for airborne chromium-6 in the workplace. Whether inhaled or ingested, it can also cause liver damage, reproductive problems and developmental harm.
Read more
828 people found this helpful

Brooks
1.0 out of 5 stars Does not reliably remove fluoride or dissolved solids
12 July 2018 - Published on Amazon.com
Verified Purchase
Water filtered through very slowly which would have been fine and well worth the time if the pitcher actually worked as advertised. I bought this mainly to filter out fluoride from the water prior to distilling.

I have since read some reviews from people who actually tested the water for fluoride removal and found that it was NOT removed. I did test for TDS (total dissolved solids). I tested my tap water and then ran that same tap water through the Aquagear filter. There was actually a little bit higher amount of TDS in the water AFTER filtering. If the filter is not removing at least a percentage of solids then I tend to believe the comments stating that fluoride was not removed are true.

This is a very expensive plastic pitcher and poorly engineered at that which you can read about in many comments. The replacement filters are also very expensive. I decided to cut my losses and threw away the filter and cup. Now I have a very expensive plastic pitcher which I don't really need. I will likely toss it soon because it makes me mad every time I see it.
Read more
216 people found this helpful
Go to Amazon.com to see all 3,107 reviews 4.1 out of 5 stars
Free & fast delivery, movies and more with Amazon Prime
Prime members enjoy free & fast delivery, exclusive access to movies, TV shows, games, and more.
> Get started
Back to top
Get to Know Us
Connect with Us
Make Money with Us
Let Us Help You
© 1996-2020, Amazon.com, Inc. or its affiliates