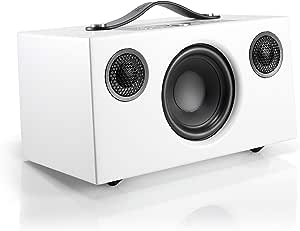 A small and easy to place multiroom stereo speaker.  With stunning dynamics and deep bass  in abundance, the Addon C5 performs bigger than it looks.

James
3.0 out of 5 stars Looks great, sounds okay.
26 April 2018 - Published on Amazon.com
Verified Purchase
I bought this with high expectations based on all the positive audiophile reviews. It's a great-looking device and very simple to set up, but I was really unimpressed by the sound. It's true that it pushes a surprising amount of bass and handles dynamics well for a speaker of its size, but I found that mids and vocals were pushed way forward, and overall the sound is as tinny and fatiguing as portable speakers generally are.

It doesn't sound terrible by any means, but it also doesn't sound better than any number of much cheaper options. Unless you're really excited about the app interface and the possibility of multiroom play (I'm not), I don't see anything to justify the pricetag.

If you're concerned with sound quality, you're better off spending an extra $100 on basic bookshelf speakers. If you're not, you could just as easily spend $50 on a Chinese-made bluetooth speaker.
Read more
10 people found this helpful

Pinball Lizard
5.0 out of 5 stars Amazing sound from small, portable speakers
4 April 2020 - Published on Amazon.com
Verified Purchase
I ordered these because I'm working from home all the time now (like many people) and my favorite work area was one of the few in the house with no decent audio. Our Sonos Play 5 has been extremely frustrating with its wifi dropout issues; evidently they're well known for poor performance with anything other than strong wifi, which I wish I had known before I bought them. Anyhow, I wanted the C10 but couldn't find one in stock anywhere, and thus took a chance on the "lesser" C5. If I had paid attention to the measurements and realized how small it is I wouldn't have ordered it, and that would have been a huge mistake! The sound is amazing and the features are excellent, including built-in Bluetooth. It has EQ features which I've played with a bit but ended up leaving at defaults because that sounds great; at first I thought it was a little boomy and needed less bass but I've changed my mind. Our wifi is worse on the first floor than I realized, and the C5 will drop occasionally, but unlike the Play 5 it doesn't lose its mind and refuse to ever play anything again -- it just picks up again when it can, usually in a few seconds. However, when I do carry it down to the first floor I use Bluetooth instead of wifi, thanks to the dropout, and it's flawless. I'm pretty sure there's a C10 in my future, perhaps replacing the Sonos. I know there are features on the C5 I haven't even explored (presets, Spotify connectivity, inputs I don't need, ...). I'm well and truly sold on Audio Pro.
Read more
One person found this helpful

First, the good stuff: This sounds absolutely wonderful. I am far from an audiophile, but I am pretty good at pretending. I was worried that the bass would overwhelm, it does not. The sound is rich and balanced. I listened to Dave Brubeck and George Winston and they sounded great. I have yet to do a deep dive across music genres. I also listened to the spoken word (radio) and it was clear and again balanced.

I also love the looks of this speaker. Your mileage may vary.

I could not be happier that I can connect my digital audio player (with all those FLAC files) directly to the speaker. The same for other equipment, e.g. TV. From the manual I can apparently connect my turntable to the speaker, I am not convinced that will work without a pre-amp. However, I did not buy the speaker for my turntable.

Now for the truly awful. It took me hours and hours to set up. I have a brand new Asus gigabit dual band router as well as a brand new Netgear modem. I get download speeds close to 600 Mbps, so speed is not an issue. I set my speaker less than a foot from my router and modem and had my Samsung Galaxy S20 FE 5G practically resting on top of the speaker. All of this is to say I have pretty good gear and was well within range for an easy set up. It took hours and hours to set up the application. I tried switching from wifi play to input play (wifi play is correct.) I tried the alternative set up. I tried my old Galaxy 7. I tried my tablet. I tried changing my router from auto to n only, then to legacy. I tried connecting the speaker to my home network on one phone - so I knew it was connected, and it was visible in my network, and tried to set up the app on my other phone. I tried and tried. I even tried an ethernet hard connection before trying to connect through the app. After hours and multiple attempts I set up a guest SSID with a password without special characters and was able to connect. What frustration. Then, when I turned my tablet off and back on I had go through the set up again. Easier this time. Then I had to set up again on my main phone. Again, easier.

The app itself is poor. I cannot play Spotify through the speaker unless I use bluetooth outside of the audio pro app or pay for premium service. TuneIn, which is my go-to for radio, is not the same TuneIn downloaded to my phone because one of the stations I listen to daily is not supported on the version in the Audio Pro app. I cannot add a new app to the Audio Pro app - I ( listen to podcasts via Podcast Republic.) Now, the workaround is to listen to those through Bluetooth- which I was trying to avoid.

None of the above is a deal breaker, what might prompt me to return this item is the fact that the power plug falls out at the slightest nudge. I have this on my nightstand and have knocked the power cord out twice in 24 hours.

Bottom line, this sounds extraordinary, my experience setting up might be exceptional, and the app is lousy.

Update:
Weeks later and I have packed it up to return. This makes me sad because it sounds fabulous and I really like the way it looks. I am pleased that it offers wi-fi, blue tooth, and 3.5 mm (did I get that size right?) connections. I do not see anything else I want with all of those options.

The problem with the plug disappeared once it was close to stationary. Call it user error.

So, why am I returning it? Multiple glitches, and I was very close to living with them.

Before blaming my network, a speed test showed 400+Mbps download.

Two of the preset buttons never lit up. Sometimes they worked and sometimes it took multiple tries to get them to work.

Blue tooth had similar issues. Sometimes it would connect and sometimes it would not. There were multiple instances that I could see it was connected in my phone independent of an app as well as on the app itself. The lines showing changes in volume would go up and down. However, there was no sound. Sometimes blue tooth worked immediately, sometimes it took multiple times. Plus, there is a delay for the sound which did not help.

I was close to living with all the glitches because I liked it that much. I hit my breaking point when I lost the connection to my network and it would not reconnect. The disconnect happened mid-day with no loss of power and no loss of the internet. I was not ready to play with it for hours to get it reconnected. I will now delete the special SSID I set up to make this work the first time around.

Really, I am disappointed. I do not know if I just got a bad item or if these problems are more wide spread.
Read more

Chris B.
4.0 out of 5 stars Great as a second wireless speaker or to use in a smaller room
9 March 2019 - Published on Amazon.com
Verified Purchase
I bought this a few weeks after purchasing an Addon C10. The C5 is quieter, provides less bass which is to be expected for a speaker this size. If you are looking to purchase one wireless speaker, go for the C10, especially if you will be using it in a larger room. That said, as a second speaker to be used in a smaller room and carried outside from time to time, this speaker is excellent (or to listen to after the kids are asleep). If you really want to rock out, the speaker does have decent volume and sounds good, even at its highest volume.

Other considerations: Pandora doesn’t work over wireless, but I have grown to love Spotify (though only premium works wirelessly). The app is clunky but it does what it needs to do (e.g., allows syncing speakers which works well.
Read more
One person found this helpful

Andrew W. Ryan
1.0 out of 5 stars Please fix the sleep timer
2 August 2018 - Published on Amazon.com
Verified Purchase
Speaker has a 30-minute timer when on aux., line-in and Bluetooth. The setting in the app to turn this off does not work.
I can't give it more than 1 star until this is fixed. Just take off the feature or have off by default. Nobody wants their speaker turning off every 30 minutes.
Read more
4 people found this helpful
Go to Amazon.com to see all 27 reviews 3.6 out of 5 stars
Back to top
Get to Know Us
Connect with Us
Make Money with Us
Let Us Help You
© 1996-2021, Amazon.com, Inc. or its affiliates