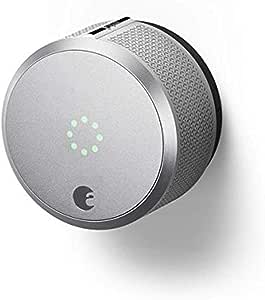 Make your front door smarter with an August Smart Lock Pro. Control keyless access and keep track of who comes and goes, all from your phone.

Secure, keyless entry to your smart home. Lock and unlock your door with your phone. Give keyless entry to family, friends, and home services without worrying about lost or copied keys. August Smart Lock Pro attaches to your existing deadbolt so you can still use your regular keys. With our proprietary DoorSense technology, you’ll know your door is completely closed and locked. It’ll even lock itself when you leave. Works with Apple HomeKit & Z-wave wireless home control technology.

Works with most standard deadbolts

August Smart Lock Pro is compatible with the widest range of standard deadbolts.

Keep your existing lock and keys

It easily attaches to your existing deadbolt, so everyone can still use their keys.

August Smart Lock Pro installs inside your door in about 10 minutes with just a screwdriver.

suzbk61
4.0 out of 5 stars Nice lock, but weatherstripping is an issue
11 March 2018 - Published on Amazon.com
Colour Name: SilverVerified Purchase
I found the lock fairly easy to install, with one exception. My front door, like most, has weatherstripping, so it is needed to press the door into the weather stripping to engage or disengage the bolt. The August Smart Lock is not able to lock or unlock without that pressure on the door, so I can't use any of the automated features it professes. I can't have it automatically unlock as I approach the door, or have Alexa lock it for me. I am researching weatherstripping that does not require the same door pressure to be effective and perhaps lays a bit more flush with the door frame, to hopefully resolve this issue. Otherwise, I am satisfied with the lock. I just wanted to forewarn others about the undocumented issue about the loss of features when you have typical weatherstripping around your door. I believe this would be an issue with any smart lock, so it is not a knock on​ this one, just something people should be aware of when considering a smart lock.
Read more
188 people found this helpful

Steve Hogan
3.0 out of 5 stars Works as a lock Installation is mostly OK Alexa integration is poor.
10 August 2018 - Published on Amazon.com
Colour Name: SilverVerified Purchase
So I bought this because it has the best reviews on the web. Bought one here on Amazon and another directly from the manufacturer. The first one installed without a hitch. The instructional videos were easy to follow and all went well. Connected it to their Connect bridge and was able to access this lock from the internet. So far, so good. So I go to install the second lock. For the life of me, I cannot get it to install properly. I'm not an idiot (at least as far as I can tell) but, no matter what I try, it doesn't work.

I call their customer service and, after flogging their automated menu system, get to a live person who tells me that "the lock needs to be recalibrated" or some such stuff. She sends me a video that shows howto do this. It involves holding the lock a certain way and turning the lock knob to the left until you hear a sound. I do this but no joy. I call back and another person tells me, "force it to the left. Don't worry. If you break it, we'ss send you a new one." So I force it and VOILA! I can now install the lock. It turns out the the lock is set up for left-hand doors and must be recalibrated for right-hand doors. Inasmuch as the universe is made up of 50% left-hand and 50% right-hand doors, would't you think that they would at least mention this in the installation videos? You might think so, but you would be wrong. So two hours of my time wasted on a project that should take 15 minutes at most.

So I go to connect this second lock to the Connect bridge and find out that the bridge can only handle one lock at a time. So, even though the locks are within 15 feet of each other and the bridge is midway, you must have a second bridge. It their defense, this is mentioned in the fine print about the bridge, but it is such a dumb limitation that it never occurred to me. Well, now I have just one of my two locks accessible from the web.

But wait, it get's better.

Now comes the time to hook this thing up to Alexa. It turns out that there are 2 Alexa skills for these devices. One with a Red logo and one with a Black logo. The black one is newer and somewhere it says that this is the preferred skill. I load the skill and follow the directions and it says to use the Alexa Smart Things menu to discover the locks. No workee. Mess with this for an hour, still no workee. At this point, you might ask why I chose the black skill instead of the Res skill. The answer is that the Red skill requires you to say "Alexa, ask August to lock the front door" and the black one allows you to say "Alexa, lock the front door."

After messing around for an hour, I decide to load the Red skill. The Red skill is capable of discovering the lock itself and amazingly, it works. So for laughs I go and try the Black skill again and it now works. It turns out that if you allow the Red skill to "discover" the locks, the Black skill will then be aware of them. So you might think that the issue is solved. But you would be wrong.

It turns out the to LOCK to door, you must use the Red skill, since the lock function is not supported by the Black skill. So you cannot say "Alexa, unlock the front door." You must say "Alexa, ask August to unlock the front door." Oh yeah. "Alexa, tell August to unlock.. " or "Alexa, have August unlock... " will not work. It must be "Alexa, ASK...." Lame.

Oh and because the locks cannot be discovered by the Alexa Smart Things code, there is no way to incorporate it into ALexa scenes or other such routines.

I suppose it is possible the these locks might be discoverable by other bridges, since they are allegedly Z-Wave based, but I don't feel like wasting any more of my time on Earth figuring this out. Life it too short.

TLDR: The bluetooth lock functionality works fine. Everything else is half-baked at best.
Read more
82 people found this helpful

K. Witek
1.0 out of 5 stars Bad Quality Assurance and lack of Support for August products
25 August 2018 - Published on Amazon.com
Colour Name: SilverVerified Purchase
Overall it has been a disappointing experience, despite wanting to enjoy the smart lock. I have one like this already and this item arrived with the rib on the left side, and it will not spin in either direction. This shows that the company has a problem with quality assurance. I tried to contact them to troubleshoot or get a replacement, but after being on hold for 20 mins, the line was dropped. Tried email and received no response. It feels like the company is not able to stand behind its products.
Read more
49 people found this helpful

Danielle M.
1.0 out of 5 stars Walk away now!!
20 February 2019 - Published on Amazon.com
Colour Name: SilverVerified Purchase
I mean, if you are committed to purchasing the August, then buy direct, because they won't warranty what you purchase through Amazon. :( I had to learn this the hard way unfortunately. I purchased the lock, connect and doorbell in June 2018. At no point did any of the components work in unison. First, the doorbell wouldn't power up. August said it was our existing doorbells faulty/insufficient power source. I hired an electrician to upgrade the 18v. wiring - he said it was ridiculous but did the work I requested anyway. Still doesn't work. Then, I decided to just use the doorbell camera as a makeshift 'security camera' set up on a table in my house. Fine. But, it doesn't even work anymore since I spent more money to upgrade our internet receiver. It simply won't connect.

As far as the lock, I had to have a new piece sent out and finally got it to work with the August Connect. It worked from August - December and then we had a wind storm and the August Connect for some reason couldn't pick up the internet signal. Like I said, shortly thereafter I upgraded and got the very best internet modem and package through Comcast because I really needed these three components to work simultaneously. Well, the lock and connect are now working together.

I have sent dozens of emails, had several conversations with August support since August (when we initially installed on the equipment on our new home), So they are well aware of the on-going problem. Well, with this final problem, I just simply asked for them to return what I paid, I would return their equipment and I would continue to be positive if asked about the equipment. Their response was sorry, you didn't buy directly from us. There's nothing we can do.

Ok. Well, there's something that I can do and that warn consumers not to go down the same rabbit hole I did. There you have it. You choose. But, don't say you weren't warned!!!
Read more
33 people found this helpful

KH
4.0 out of 5 stars Is a nice addition to my door.
9 January 2018 - Published on Amazon.com
Colour Name: SilverVerified Purchase
First off, I really like this automatic lock. It was a relatively easy installation. Automatic opening (when I come home) and automatic locking (when I leave the house) work very intuitively. Not so intuitive is when I go outside temporarily, such as yard work, the automatic locking action happens, but just getting close to the door again will not open the lock. I have to open my phone to access the app or use my key to open the door. I would give 5 stars if a voice command or perhaps a tap on the phone would open the door in not so intuitive situation.
Read more
39 people found this helpful
Go to Amazon.com to see all 506 reviews 3.8 out of 5 stars
Back to top
Get to Know Us
Connect with Us
Make Money with Us
Let Us Help You
© 1996-2021, Amazon.com, Inc. or its affiliates