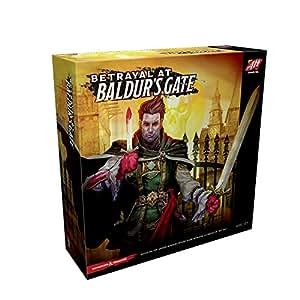 Style Name: Baldur's gate
Technical Details
Additional Information
Feedback
Would you like to tell us about a lower price?
If you are a seller for this product, would you like to suggest updates through seller support?

Never Split the Party…Unless Someone is the Traitor!
The shadow of Bhaal has come over Baldur’s Gate, summoning monsters and other horrors from the darkness!
As you build and explore the iconic city’s dark alleys and deadly catacombs, you must work with your fellow adventurers to survive the terrors ahead. That is, until some horrific evil turns one—or possibly more—of you against each other. Was it a mind flayer’s psionic blast or the whisperings of a deranged ghost that caused your allies to turn traitor? You’ll have no choice but to keep your enemies close!

Can you and your party survive the madness or will you succumb to the mayhem and split (or slaughter!) the party?

Marty W
3.0 out of 5 starsSuffers the same play-test issues of the other Betrayal games
1 December 2017 - Published on Amazon.com
Style Name: Baldur's gateVerified Purchase
I have only played a couple of scenarios in the new Betrayal at Baldur's Gate, so you might take this review with a few grains of salt.

The new characters all have a special power, like a spell, or ranged attack, or re-roll mechanic. This gives each character a bit more uniqueness and adds to the already high replayability factor.

The D&D theme is well done in terms of the scenarios, events, flavor text, etc. I wasn't sure a thematic mashup of Betrayal and D&D would work, but so far, so good. Unfortunately, you can't read through the haunts without spoiling them, so I don't have enough data to know how well they fit the theme. However, in one play test, the haunt was all players versus the game. There was no traitor, and working together to beat the boss monster gave a familiar D&D feel.

I like the way the buildings and streets combine to make a large "ground level" map, with a smaller catacombs level. I also like that each level has its own draw pile. In the original, a critical room can often be accidentally "buried" at the bottom of the draw pile because of the way the draw mechanic works. This does not occur in the new version.

That said, one of my biggest complaints with the various Betrayal games (the original, Widow's Walk, and now this one) is that the scenarios do not appear to be play tested very well, if at all... or even well edited in some cases.

How do I know?

We almost always have questions about the traitor powers/actions... and not minor questions, but key issues with the way the powers are worded that make the haunt rules overly ambiguous.

My wife and I are veteran gamers. We have played all the Betrayal games as well as other traitor-mechanic games like Shadows over Camelot, Battlestar Galactica, Dead of Winter, etc... The design challenge with the Betrayal games is that every scenario has slightly different mechanics for the traitor. Because of this, the game designers need to be extraordinarily detail-oriented when writing up the haunt rules.

Due to the age of the original Betrayal, haunt clarifications can sometimes be found online, but not so for Widow's Walk or Baldur's Gate, so you are on your own to interpret the rules as written.

For the hero group, the group can generally come to a consensus after discussion. However, the traitor is usually on their own to interpret any potential rule problems or vague wording, unless they want to give away their secret powers or win conditions.

I have yet to play a haunt that hasn't had an issue where the text was not entirely clear and required some (varying) amount of interpretation. In almost every case, a single sentence (or two at most) could have cleared up the confusion. A good editor should have caught these ambiguities, but I have the distinct impression the the designers did their own editing... or if there was an editor, the editor was only looking for grammatical issues, and not in-play rules ambiguity. A play test of each haunt should haven eliminated most of these ambiguities.

All games have some amount of rules ambiguity, but it is more pronounced in the Betrayal games simply because there are some 30 to 40 different haunts that all may have different issues, and you are not able to know the haunt rules in advance without spoiling the game.

This has been a big problem for me in that any win or loss is tainted by the "Hey, did we play that part correctly?" discussion after the game. It often takes away some of the shine of a win, or adds to the frustration of a loss. I don't mind losing. Losing a competitive game can be lots of fun. But I hate losing when it later becomes clear that an incorrectly interpreted rule may have changed the whole scenario or player strategy.

As a non-spoilery example, one of the haunts had a big monster with some smaller minions. The minions came out first, and the big boss a couple turns later. In the haunt, it appears to state that the minions go away once the boss monster comes out, but a sentence or two later, it implies the exact opposite. Also in the same haunt, the text appeared to imply that the boss monster may be able to attack more than one character given a certain condition, but it didn't explicitly state it. We rules that the minions stayed and continued to attack, but the boss monster did not attack more than once. That seemed to be the balanced interpretation, and we won the scenario... but we may not have one if the boss monster were allowed a second attack. So the victory felt diminished. Given that we had not just one, but two rules clarifications required for the haunt, I was a bit disappointed in that particular scenario.

Don't get me wrong. I don't dislike the game. If you are a fan of the other Betrayal titles and you like D&D, you will almost certainly enjoy this mash up. However, my recent experiences with poorly worded haunts has tarnished what would otherwise be a really fun experience.

I give it 3.5 stars. It will go up to 4 stars in the future if I encounter fewer haunts that have the same play test problems.

Jake
5.0 out of 5 starsVery fresh take on the original.
10 October 2017 - Published on Amazon.com
Style Name: Baldur's gateVerified Purchase
My boardgame group has loved my Betrayal at House on the Hill for years. They welcomed the addition of Widows Walk.

Then I introduced them to Betrayal at Baldur's Gate last night.

Most of the mechanics from the original games work exactly the same. There are some nuances that are different though. Haunt rolls are changed so that now you roll dice equal to the number of omens revealed and once someone rolls a 6+ the haunt starts.

Each character has special abilities now rather than just just being better in a certain stat.

Rather than upper floor/ground level/basement the map progression is now buildings/street/catacombs. This isn't as straightforward as it looks. The doors are color coded to let you know what type of tile you are entering. (Rather than 1 large pile of tiles you keep each type separate in this game) Sewer gates/stairs go down into the catacombs. This leads to a very interesting board layout as the street winds through buildings and the catacombs lay separate.

Difficulty level seems slightly higher than the original, at least in the couple rounds we have already played.

My only con to the game at this point is that some tiles feel like they are labeled incorrectly. Buildings that feel like streets and vice versa.

If you liked betrayal at house on the hill you will like this.

Honest Reviewer
4.0 out of 5 starsVery fun, but flawed...
12 February 2018 - Published on Amazon.com
Style Name: Baldur's gateVerified Purchase
There was lots of thought and design that went into this game - it's remarkable in some ways, but falls short in others.

OVERVIEW: Betrayal at Baldur's Gate is a Dungeons and Dragons themed version of Betrayal at House on the Hill, with only 3 meaningful changes: 1. There's a minor tweak to the rules governing when the haunt is triggered, 2. The players' characters have built-in special abilities, 3. Instead of a three story house, you're playing in a two story city (streets&buildings on the base level, and underground catacombs below).

STRUCTURE:
Like the original Betrayal at House on the Hill - the game is really 50 games in 1. It's a semi-structured dungeon crawl game, where each player explores a map that will never be the same twice. You survive light encounters, find items, and attempt to boost your four attributes so you can face whatever challenges are revealed when one of the 50 potential haunt scenarios gets triggered.

ACCESSIBILITY:
The learning curve is slightly high - but new players can learn it quickly by playing with someone who understands all the rules. The rule book for the game is probably 20-30 pages.

FLAWS:
Three big ones: 1. The box does a poor job organizing all the pieces of the game, so the flow of the game is constantly getting snagged while you have to sift through lots of indistinguishable little cardboard tiles that correspond to unique events in the game, 2. The outcome of the game feels too driven by random chance, and not enough by the skill or strategy of the players, 3. Betrayal at Baldur's Gate is not compatible with Widow's Walk (the expansion to Betrayal at House on the Hill).

TAKEAWAY:
This game is a good fit for 3-6 players that want to engage in a highly imaginative, narrative-driven game (could also be played in 2player variant if each player uses two characters before the haunt triggers). There's high replay value because the map/characters/items/haunt scenario will never be identical. However, the flow of the game is fairly choppy, and the outcome of the challenges presented by the game are too skewed by chance rather than skill.

If you like the idea of this game, original Betrayal at House on the Hill is probably the better investment, because you can add the Widow's Walk expansion. But if you like the Dungeons and Dragons theme and aren't terribly interested in getting an expansion, you should opt for Betrayal at Baldur's Gate
Read more
14 people found this helpful.
Go to Amazon.com to see all 178 reviews 4.7 out of 5 stars
Free & fast delivery, movies and more with Amazon Prime
Prime members enjoy free & fast delivery, exclusive access to movies, TV shows, games, and more.
> Get started
Back to top
Get to Know Us
Connect with Us
Make Money with Us
Let Us Help You
© 1996-2020, Amazon.com, Inc. or its affiliates