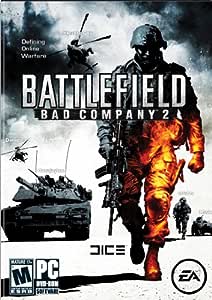 Fastest delivery: 16 - 18 July Details
Ships from and sold by Amazon US.

Get ready for the most spectacular FPS multiplayer experience ever! Battlefield Bad Company brings the spectacular Battlefield gameplay to the forefront of next-gen consoles and PC - featuring best-in-class vehicular combat set across 8 huge sandbox maps each with a different tactical focus.

Sylvester
3.0 out of 5 starsFun, but many problems.
24 November 2015 - Published on Amazon.com
Platform For Display: PCEdition: StandardVerified Purchase
Battlefield Bad Company 2, the first Battlefield game playable on PC and with an actual singleplayer campaign. In this game the memorable characters return from the first Bad Company, such as Sweetwater, Haggard and Redford.

CAMPAIGN:
The first mission takes place in World War II, whereas the rest is set in the present day. It's very slow and boring, not only does this level base itself off of something that never could have possibly happened in World War II, but the screen shakes maniacally whenever a loud alarm or a big explosion goes off. It's almost laughable when it happens. The rest of the missions have very beautiful environments, varying from snowy mountains, rain forests, deserts, urban, open areas with mountain surrounding them, and with autumn trees. in some places. The story itself is okay. But the part where the game's problems really appear is in the gameplay. Whenever an enemy has a shotgun, they can kill you at the range of a sniper rifle, and the enemies only try to kill you, instead of your teammates as well. They apparently also have x-ray vision, because no matter where you hide for cover they always know the exact spot your in. For example: If you try hiding in a house, every enemy will always know which room you're in, which corner you're hiding in, and which part of the wall to shoot. The cutscenes make it seem like an action movie, but with good characters. I won't try to spoil anything, but the final mission is surprisingly satisfying even though it isn't very long.

MULTIPLAYER:
I really can't say much about this, because playing it requires your email, what country you live in, and what your birthdate is. Most games don't require this much information to play online.

EXTRAS:
It comes with the free DLC Battlefield Bad Company 2: Vietnam, however, since this DLC is multiplayer-only, it needs the same information as said above.

OVERALL:
I expected better, but it doesn't deserve to be called a bad game. Hopefully if DICE ever figures out what fans loved about this game and they make Bad Company 3, they will improve on some of these features.

R1b5NW1ng5
4.0 out of 5 starsWished I bought it earlier
2 January 2014 - Published on Amazon.com
Platform For Display: PCEdition: StandardVerified Purchase
I had played the original Battlefield series and always enjoyed rampaging around in vehicles. I then got caught up in COD and didn't see the point in spending double and running in parallel FPS "realistic" warfare games. Since I am pretty cheap I usually roam around looking for the discounted "old" games when a series comes out with a new release. I kept noticing high marks for this game and thought it would be worth looking into. It sure was and I regret not making the buy earlier since the number of multiplayer servers is currently pretty low. The single player game was pretty decent in both storyline and gameplay. I kind of enjoyed not having a gigantic backpack filled with a zillion optional gizmos and gadgets that either meant you stopped all the time and sorted through them or you tried to ignore them. There wasn't a whole lot of second guessing regarding your loadout as compared to other warfare FPS games.

The multiplayer rocks completely and since about half the players are all maxed out on experience from playing for years it is a decent challenge. The only drawback is when the opposing team is largely pros and your team is less so. Being completely dominated multiple times can be a bit depressing, especially when you turn around and find that half your team left the game ;-)
I've not found the auto-balancing function to be very effective even though it may announce the teams will be rebalanced "very soon".
Worth buying and playing while there are still servers up and running.
Read more

Neutron Man
5.0 out of 5 starsTwo words: Destructable environment
1 January 2015 - Published on Amazon.com
Platform For Display: PCEdition: StandardVerified Purchase
A solid FPS game and a very funny single player campaign. This game features a fun and replayable single player campaign that isn't too hard to learn. The "squad" you play in as a member pokes fun at Call of Duty: Modern Warfare missions while at the same time during their own shenanigans. If you pause between sections in the campaign they sometimes start to banter and you can listen to all the funnies.

Multiplayer is a fun and once you get the hang of it can be full of shenanigans. However, multiplayer isn't very popular right now. Only a few servers are populated in North America and the players are often very good so it can be hard to play. The Vietnam expansion was the best expansion I have ever played but has even fewer servers and players. Too bad since this was a very fun game.

Recommendation: I can't recommend it at more than $20 as the multiplayer base has mostly moved onto Battlefield 3 and 4 and other games. The singleplayer is fun but look for a discount so you don't have to pay the ridiculous EA price tag on Origin for a 2009 game.
Read more
Go to Amazon.com to see all 488 reviews 3.7 out of 5 stars
Free & fast delivery, movies and more with Amazon Prime
Prime members enjoy free & fast delivery, exclusive access to movies, TV shows, games, and more.
> Get started
Back to top
Get to Know Us
Connect with Us
Make Money with Us
Let Us Help You
© 1996-2020, Amazon.com, Inc. or its affiliates