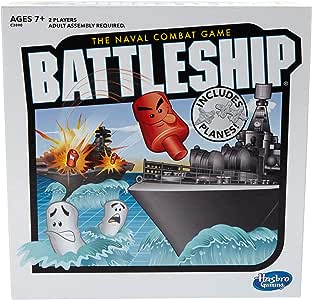 by Hasbro Gaming
4.7 out of 5 stars 2,656 ratings
Currently unavailable.
We don't know when or if this item will be back in stock.

Style Name: Standard
Technical Details
Additional Information
Feedback
Would you like to tell us about a lower price?
If you are a seller for this product, would you like to suggest updates through seller support?

This exclusive edition of the Battleship game includes 2 planes in addition to ships, for exciting aircraft combat. In head-to-head battle, players search for the enemy’s fleet of ships and aircraft, and destroy them one by one. With convenient portable battle cases and realistic looking naval crafts and planes, the Battleship game puts players right in the middle of the action. Each player announces the coordinates of each strike, and then hopes that it hits. Position ships strategically to survive opponent's relentless strikes, and track hits and misses with red and white pegs on the ocean grid. No ship or aircraft is safe in this game of stealth and suspense. Hasbro gaming and all related terms are a trademark of Hasbro.

You sank my battleship!

Warning: Product must be assembled by an adult. Keep small parts necessary for assembly out of children’s reach.

Battleship is the classic naval combat game that brings together competition, strategy, and excitement. In head-to-head battle, you search for the enemy’s fleet of ships and destroy them one by one. No ship is safe in this game of stealth and suspense. Try to protect your own fleet while you annihilate your opponent’s. It’s a battle that you must win!

Feel the authentic thrill of the battle when you wage war on the high seas in the game of Battleship. Take charge and command your own fleet to defeat the enemy. With convenient portable battle cases and realistic naval crafts, Battleship puts you right in the middle of the action. It’s a full-out assault. Position your ships strategically to survive the relentless strikes.

Theresa
4.0 out of 5 starsBattleship with planes, what?
6 July 2018 - Published on Amazon.com
Style Name: StandardVerified Purchase
This isn’t your classic battleship game you played years ago, it’s been updated, but for the best? In my mind “no”. They’ve added planes, but that just adds 3 more shots to win & they’re not even the same planes, ones a bomber & ones a fighter jet, they both have 3 holes, but isn’t the battle about sinking each other’s armada? Plus,1 of the planes is too tall to shut the top when set up, so no stopping a game in the midst & shut the lid. Isn’t the deal to have the same ships? If we have the same ships shouldn’t we have the same planes? Who ever sunk a plane by dropping a bomb? Ok, I know what your thinking, man, this guy sure is making a lot out of a nothing, but I grew up sinking my opponents likewise military. If you feel like me, get the classic battleship game or don’t add the planes when playing.
Now on to something that DOES matter..they made the “hit/miss” pegs bigger at the top to hold on to, having dexterity problems I thought this would be a plus, but once you dump them all out into the handy “take anywhere trays”, you’ll find they don’t all fit if you want to close the lid, so you have to leave some in the box. If you don’t take the box with you, the way it’s designed you take the chance of running out, we personally never have run out during a game, but after losing some, this may be a problem.
I would suggest anyone who played the Classic Battleship game & want to relive those days or show the kids how it was in “the good old days”, get the classic game, if you just want a game, this will work & the game will last a bit longer

adam6979
1.0 out of 5 starsGreat Game - Cheap Crappy Redesign
18 September 2018 - Published on Amazon.com
Style Name: StandardVerified Purchase
This game is everything it should be. Hours and hours of fun. However this version is crap. It is so small that all the ships and pins won't fit in each tray. The one that I got had the call marker grid already broken off. You also can't close the trays with the ships in place, so you can stop play and resume another time. And forget about holding this in your lap... that isn't going to happen, pieces fall everywhere. I'm sending this scrappy version back and getting the retro one. It is $3 more and people say much better.
Read more
43 people found this helpful.

Grandma Mia
5.0 out of 5 starsHappy I purchased this Battleship game
25 September 2017 - Published on Amazon.com
Style Name: StandardVerified Purchase
After reading many review's I'm happy that I purchased this Battleship game. The ships, planes and pegs all store in the game compartments, which is what I was looking for. The game cases are separated and my 10 yr old grandson loved the planes. Highly recommended.
Read more
34 people found this helpful.

Prescott
5.0 out of 5 starsLove it!
6 July 2018 - Published on Amazon.com
Style Name: StandardVerified Purchase
Fast shipping and who doesn’t love this game. I was looking in regular stores for this game and all I could find was “electronic “ versions of it. I wanted the simple, old fashioned one. I found it here, thank you!
Read more
21 people found this helpful.

KDD
5.0 out of 5 starsGreat fun!
25 October 2017 - Published on Amazon.com
Style Name: StandardVerified Purchase
This such a great game. Kids and adults alike can be entertained for a long time. There's just something appealing about trying to avoid being discovered, while seeking your opponents ships. This new version includes one more "ship" which is actually a plane. Great fun!
Read more
20 people found this helpful.
Go to Amazon.com to see all 697 reviews 4.4 out of 5 stars
Free & fast delivery, movies and more with Amazon Prime
Prime members enjoy free & fast delivery, exclusive access to movies, TV shows, games, and more.
> Get started
Back to top
Get to Know Us
Connect with Us
Make Money with Us
Let Us Help You
© 1996-2020, Amazon.com, Inc. or its affiliates