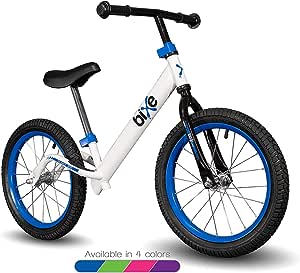 by Bixe
4.6 out of 5 stars 1,320 ratings
Secure transaction
Returns Policy
Your transaction is secure
We work hard to protect your security and privacy. Our payment security system encrypts your information during transmission. We don’t share your credit card details with third-party sellers and we don’t sell your information to others. Find out more
Available from these sellers.

juls
5.0 out of 5 stars I wish I bought sooner
23 July 2019 - Published on Amazon.com
Colour Name: GreenVerified Purchase
Love, love, love this bike! I have a 7 year old son (8 in a couple months) with autism who was struggling to ride a bicycle without training wheels. He wasn't having fun learning and Mom and Dad were getting a little frustrated. It seemed like he was understanding how to balance but didn't have confidence that he could. He was afraid of us letting go of the bike and he wasn't understanding the need to keep pedaling for momentum. Every time we would let go of the bike, he was just bale, jumping off the bike or putting his foot down to stop. So I bought the Bixe bike. He loves it! He keeps asking to ride his bike and we don't have to hold on to him or follow him closely. We've had it about a week now. I'm so happy to see his confidence skyrocket and to see his joy in riding. Attached is a video in our driveway on a slight incline. He drags his feet to brake so he doesn't go into the street. However, we were at a campground this weekend and he glided down a huge steep hill without braking. There is a nice little bar/ledge he can rest his feet on. He rode the big hill over and over again. (it was safe on the bottom of the hill). So I definitely love this bike. I think now that he has the confidence of balancing he will be able to transition to a bike with pedals better. I highly recommend this bike. I only wish we would have gotten this for him sooner!
Read more
113 people found this helpful

J. R.
5.0 out of 5 stars Pleasantly surprised with this, recommend it!
18 March 2019 - Published on Amazon.com
Verified Purchase
Our 6.5 year old has been riding a secondhand Strider 12' with the longer seat post and needed a larger balance bike... this Bixe 16' is a perfect fit, and can grow with her. The larger frame and wheels made her ride much smoother and appeared easier to push off and glide for longer. On this she was able to fully lift her feet and coast (without any prompting), which she never did before on the smaller bike. She was then able to ride it for 3 miles, with some breaks to play. Really impressed with the product and would recommend to other families! Also appreciate that the tires/tubes are a standard size, so swapping them out is easy. (My only qualm is that it is a steel frame and could be made of aluminum and weigh a little less.)
Read more

5.0 out of 5 stars Pleasantly surprised with this, recommend it!
Reviewed in the United States on 18 March 2019
Our 6.5 year old has been riding a secondhand Strider 12' with the longer seat post and needed a larger balance bike... this Bixe 16' is a perfect fit, and can grow with her. The larger frame and wheels made her ride much smoother and appeared easier to push off and glide for longer. On this she was able to fully lift her feet and coast (without any prompting), which she never did before on the smaller bike. She was then able to ride it for 3 miles, with some breaks to play. Really impressed with the product and would recommend to other families! Also appreciate that the tires/tubes are a standard size, so swapping them out is easy. (My only qualm is that it is a steel frame and could be made of aluminum and weigh a little less.)
Images in this review

None
5.0 out of 5 stars Solid bike for the price - outstanding customer service
3 May 2020 - Published on Amazon.com
Colour Name: BlueVerified Purchase
This is going to be a bit long because I rely on longer reviews by others to make buying decisions, especially reviews by parents. We needed a larger balance bike because my 4-year-old is tall for his age and we foolishly tried a pedal bike with training wheels first. (He loved training wheels, so much so that it was clear he might never want to give them up. He's not very athletic and tends to learn new physical skills slowly). So his height, the late start at balancing, and his inherited lack of athletic ability all suggest he's probably going to be on a balance bike for awhile.

So. We ordered the Bixe and a Strider 14x Sport. The Strider is a better built bike. There's no two ways around it. It would be a good choice if you have multiple kids and plan to hand the bike down a few times as older sibs outgrow it because it just seems a little more heavy-duty. Other than that, it's negotiable whether the higher sticker price is worth it. You can add pedals to the Sport (for an additional $50), but the small tires and footrest make it look a bit like a little kid bike, so I would not be surprised if my child starts asking for a "big kid" bike when it's finally time to put the pedals on. When I was looking at bikes, I thought the footrest on the Strider would be important (as opposed to just grippy strips on the body of the Bixe), but my child never rests his feet on either bike anyway. He just lifts his feet up when he wants to coast.

For less than half the price of the Strider, the Bixe is a great choice. I don't know how to articulate the difference in build between this and the Strider--the metal the Bixe is made of seems slightly less heavy-duty and when you're assembling the front steering wheel things fit together more loosely (which has zero impact on how the bike functions after you get everything put together). One nice feature the Bixe lacks is the ability to adjust the seat height without any tools. I've had to adjust the strider's seat height a few times while we were out riding, and it's really easy to do. You need the allen wrench to adjust the Bixe's seat. (That said, my child has never asked for the Bixe seat to be adjusted, which he has, a few times, on the Strider). However, I would not have noticed these differences if I hadn't compared the bikes side-by-side. In fact, we ended up keeping both bikes so one could stay at the grandparents.'

On its own, the Bixe feels solid and can definitely handle anything a kid could throw at it. I am 100% confident it will hold up until my kid is ready to upgrade to pedals and will likely be in good enough shape to pass on to another family. My kid actually prefers the Bixe a little, maybe because it looks more grown up? He's too young to describe what difference--if any--there is in how they feel to ride. I just know riding it is one of the things he looks forward to when he goes to his grandparents' house. To sum up: My kid is thrilled with this bike and I am thrilled with the price compared to the Strider.

Customer service: There was a minor problem with the Bixe bike I received that made it hard to put together. Bixe customer service went above and beyond to address the issue. Their response was fast and they resolved the issue way beyond what I would have expected. Bottom line, you don't have to shell out $250 for a bike. You and your kid will be happy with the Bixe.

If you're still reading, hope this review helps you make a decision.

James & Amanda Furlong
5.0 out of 5 stars My 9 yr old is overjoyed!
29 January 2020 - Published on Amazon.com
Colour Name: BlueVerified Purchase
My son is 9, and has autism. He has NEVER. Been interested in bikes except for turning them upside down and spinning the wheels. Until his little brother got a balance bike. His coordination issues make pedaling difficult. But he looked so uncomfortable trying to ride a bike meant for a 3 year old. I'm so glad we found and bought this bike! He's beyond excited and took it out to ride within minutes of it getting delivered.

I gave it 4 stars on sturdiness only because I'm not sure how it will hold up but it does feel really strong and durable.

He seems to have plenty of room to grow since the seat is adjustable and is pretty low, it should last him for a few years...or until he hopefully gives pedals a try ☺️
Read more
25 people found this helpful

KG
5.0 out of 5 stars The best balance bike for older children!
27 March 2019 - Published on Amazon.com
Colour Name: GreenVerified Purchase
My 4.5 yr old is not quite ready to ride a pedal-bike, so we got him this balance bike in the age 5-9 size (16 inch wheels). He absolutely loves it! My boy is average size for 4.5 yrs, and the lowest seat level fits him fine, with lots of room to grow. My 9 year old boy could ride it, too. It rides smooth on the pavement because of the air-filled tires, and is easy to steer. He is pretty fast on it now, which makes bike rides with my three kids a little easier, since he can almost keep up with them at times. I put slime in the tires to avoid flats. The bike weighs so little, we can stash it on our double stroller if he gets tired and wants to ride in the stroller for awhile. The only problem we had was a bent pipe at the handlebar attachment point, which I had to use pliers to bend back so we could insert the handlebars. Kind of a bother, but not worth returning and waiting for a replacement.
Read more
21 people found this helpful
Go to Amazon.com to see all 363 reviews 4.2 out of 5 stars
Free & fast delivery, movies and more with Amazon Prime
Prime members enjoy free & fast delivery, exclusive access to movies, TV shows, games, and more.
> Get started
Back to top
Get to Know Us
Connect with Us
Make Money with Us
Let Us Help You
© 1996-2020, Amazon.com, Inc. or its affiliates