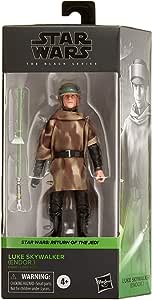 by STAR WARS
5.0 out of 5 stars 1 rating
Secure transaction
Returns Policy
Your transaction is secure
We work hard to protect your security and privacy. Our payment security system encrypts your information during transmission. We don’t share your credit card details with third-party sellers and we don’t sell your information to others. Find out more
New (4) from S$124.66 & FREE Delivery

Utilizing stolen schematics, the Rebel Alliance formulated a plan to destroy the new Death Star. Luke Skywalker joined his friends for this mission to Endor.

Kids and collectors alike can imagine the biggest battles and missions in the Star Wars saga with figures from Star Wars The Black Series! With exquisite features and decoration, this series embodies the quality and realism that Star Wars devotees love. Star Wars The Black Series includes figures, vehicles, and roleplay items from the 40-plus-year legacy of the Star Wars Galaxy, including comics, movies, and animated series. (Additional products each sold separately. Subject to availability.)

The 6-inch scale Black Series figure is detailed to look like the Luke Skywalker (Endor) character from Star Wars: Return of the Jedi, featuring premium detail and multiple points of articulation.

Star Wars products are produced by Hasbro under license from Lucasfilm Ltd.
Hasbro and all related terms are trademarks of Hasbro.

Utilizing stolen schematics, the Rebel Alliance formulated a plan to destroy the new Death Star. Luke Skywalker joined his friends for this mission to Endor.

JT Kirk
4.0 out of 5 stars A fantastic Luke Endor with a so-so reused body
9 November 2020 - Published on Amazon.com
Verified Purchase
This new Luke Endor was first released in this summer's Heroes of Endor boxed set (alongside Leia and Han Endor, and Paploo with Speeder Bike) that ended up exclusive to Hasbro Pulse; this is the same figure, just with main-line packaging instead. Luke Endor comes with a removable helmet, cloth poncho, removable belt, and lightsaber with removable blade.

This figure is pretty accurate to the film thanks to a new head sculpt and the outfit. The head sculpt is really something special, the likeness is excellent in the helmet, making great use of the new sculpting and face-printing decoration. Out of the helmet, the sculpt includes "helmet hair" with it pushed down and mussed slightly. The hair has a bit of a green tinge to the paint, kind of a sweaty look to Luke's dark blond hair, I like this but I suspect this won't be everyone's cup of tea - it looks much more accurate under strong light, but in regular room light it's more green than some might like.

The poncho does a lot of the accurate work with a good camouflage decoration and accurate sew, but its material is defiant and wants to stay puffed out around the sides. Hasbro had their factory sew the hood down (they also did this with the Leia Endor figure from this wave) which limits fantasy play but looks way more like the film by not constantly popping up, if you have Jedi figures with robes you're probably familiar. That poncho is also removable, just untab the belt and off it comes.

This figure's biggest drawback is under that poncho: it's the same body as 2014's Black Series Luke Skywalker Jedi Knight, with the "closed" tunic flap panel glued into place here. For its time, it was a decent sculpt and articulation with a middling headsculpt, but six years later it's woefully behind the times with no butterfly joint shoulders (every lightsaber-wielding figure should have those now), limited-range elbows, wide hips, and pins in the knee joints. This figure doesn't come with the costume's vest or inner belt, only the outer belt, so using this figure as Luke Death Star means either living with the Endor belt or finding a donor inner belt with its proper buckle, rivets, and lightsaber hook.

The helmet is darned good, it has the right color and sculpt, a chinstrap that has a light pin so it's easy to take on and off; it is designed to fig this figure alone, so it won't come close to fitting the 2014 Luke if you wanted to swap heads. The lightsaber hilt is the same sculpt as the 2014 figure, but now has gleaming silver paint rather than just flat silver plastic, and enjoys a more accurate black and gold paintjob, it looks fantastic with or without the removable green blade. There's nowhere to attach the lightsaber hilt on this figure since Luke hides the hilt under his poncho on his inner belt which wasn't included.

Bottom line, I like this figure a lot, I have a soft spot in my heart for Return of the Jedi Luke Skywalker and this is a great representation of the character. The poncho looks great, doesn't sit naturally the way it should but Hasbro Star Wars collectors know plenty of tricks to futzing it. The helmet and lightsaber really complete this figure. But that old body really does this figure no favors, it's not terrible by any stretch, but it's also not 2020-level articulation with the increased range of motion in the arms and neck it deserves.

Colin
5.0 out of 5 stars Decent figure worth picking up
17 November 2020 - Published on Amazon.com
Verified Purchase
I’m pretty happy about this long awaited figure. The Endor Luke is on the same body as the other two Jedi Lukes. We do get a new head sculpt and soft goods. Over all a great figure. With buying.
Read more

5.0 out of 5 stars Decent figure worth picking up
Reviewed in the United States on 17 November 2020
I’m pretty happy about this long awaited figure. The Endor Luke is on the same body as the other two Jedi Lukes. We do get a new head sculpt and soft goods. Over all a great figure. With buying.
Images in this review

Erik
5.0 out of 5 stars EXCELLENT
8 November 2020 - Published on Amazon.com
Verified Purchase
This is an awesome figure, though I think they still need to work on improving the face for these guys.
Read more
One person found this helpful

Judestrios
5.0 out of 5 stars Amazing
23 February 2021 - Published on Amazon.com
Verified Purchase
Action figures have come such a long way since I was a child so I have to indulge now. This figure is amazing; used for a display and it is perfectly detailed.
Read more

TrailWolf131
5.0 out of 5 stars Jedi Knight
9 December 2020 - Published on Amazon.com
Verified Purchase
Packing quality has improved and very pleased to have this addition to my collection. Valuable once you have it. I’m happy 👌🏼✨
Read more

5.0 out of 5 stars Jedi Knight
Reviewed in the United States on 9 December 2020
Packing quality has improved and very pleased to have this addition to my collection. Valuable once you have it. I’m happy 👌🏼✨
Images in this review