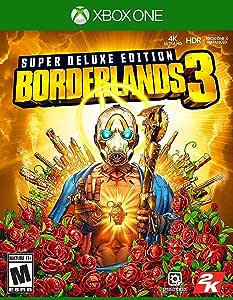 by 2K Games
Platform : Xbox One
In stock.
International product from outside Singapore
Ships from and sold by Amazon US.

The Super Deluxe Edition includes the Season Pass and Deluxe bonus content in a Steelbook case.

The original shooter looter returns, packing bazillions of guns and an all new mayhem fueled adventure! Blast through new worlds and enemies as one of four brand new Vault Hunters – the ultimate treasure seeking badasses of the Borderlands, each with deep skill trees, abilities and customization. Play solo or join with friends to take on insane enemies, score loads of loot and save your home from the most ruthless cult leaders in the galaxy.

"A MAYHEM FUELED THRILL RIDE
Stop the fanatical Calypso Twins from uniting the bandit clans and claiming the galaxy’s ultimate power. Only you, a thrill seeking Vault Hunter, have the arsenal and allies to take them down.

YOUR VAULT HUNTER, YOUR PLAYSTYLE
Become one of four extraordinary Vault Hunters, each with unique abilities, playstyles, deep skill trees, and tons of personalization options. All Vault Hunters are capable of awesome mayhem alone, but together they are unstoppable.

LOCK, LOAD, AND LOOT
With bazillions of guns and gadgets, every fight is an opportunity to score new gear. Firearms with self propelling bullet shields? Check. Rifles that spawn fire spewing volcanoes? Obviously. Guns that grow legs and chase down enemies while hurling verbal insults? Yeah, got that too.

QUICK & SEAMLESS CO OP ACTION
Play with anyone at any time online or in split screen co op, regardless of your level or mission progress. Take down enemies and challenges as a team, but reap rewards that are yours alone – no one misses out on loot.

M. Chiou
1.0 out of 5 starsStick with BL2
15 September 2019 - Published on Amazon.com
Platform For Display: Xbox OneEdition: Super DeluxeVerified Purchase
Game is incredibly laggy and littered with an overall sense of poor design decisions. Couch co-op is unplayable, subtitles are incredily tiny to the point where you have to sit literally in front of your TV screen to read them, and a lot of small things in the overall game design are just plain clunky.
Read more
33 people found this helpful.

MK
4.0 out of 5 starsGreat Game if you Liked the First Two
14 September 2019 - Published on Amazon.com
Platform For Display: Xbox OneEdition: Super DeluxeVerified Purchase
Bottom Line - Did you like Borderlands 1 and Borderlands 2? Are you expecting things to be upgraded but not totally different and revamped, with the same first person looter RPG game style with the offbeat humor?

If you answered yes to both of those questions, you'll like Borderlands 3.

In full disclosure, I have only played about 5 hours of the game so far, but what I have played, I have thoroughly enjoyed. The graphics are updated for a 2019 game, but the unique art style remains there, and from what I've seen, the new worlds look absolutely great. A lot of people have complained about lag times; I have to say, I have not personally experienced any lagging other than maybe a second or two delay in switching between menus. For me, that's a minor annoyance at best. I am playing on a standard Xbox One, though, as one person and not as co-op, so I can't speak to what is happening on other platforms or for people playing in groups.

Fights are where the game's updates truly shine - everything is more fast-paced, more streamlined, and you have the ability to jump, grapple up on ledges, and slide through the middle of things. Enemies are faster and move around more too, keeping you on your toes. It's, well - mayhem, as the trailers said. Lots of fun so far! It took me a little adjusting from previous Borderlands games, but I adapted pretty quickly.

One thing I think is a big improvement is how quickly things become "normal" in B3 as opposed to B1/B2. For example, I never seemed to find blue/purple/orange weapons in B1/B2 outside of a boss fight for the first several main quests of the game. There's a little while before you get a shield. It just takes a little while in both games before you feel like you're truly playing. In B3, you are given a shield and have the opportunity to get rarer weapons almost immediately. They're scaled, so it's not like you're getting massively over powered weapons from the get-go, but I've already found several nice blue and purple weapons to use. You can also get a variety of elemental weapons from the get-go, and you actually get USEFUL amounts of money from killing enemies, instead of the measly $2 or $3 you got at the beginning of B1/B2. These changes mean I felt a lot more prepared for bigger fights at level 5 in B3 than I ever did in B1/B2.

One less exciting change is that, yes, Claptrap's voice actor has changed, and it does throw you off a bit at first. But honestly, again, that's not a deal breaker, and I say that as someone who adores Claptrap. I still think he's got some funny lines and funny quests for you.

Another problem - the text is TINY. I'm talking miniscule. I sit on a futon about three - four feet away from a wall-mounted, sizable TV, and it's still really hard to read the subtitles. Playing in the dark helps a fraction, but it's still unnecessarily small text.

All in all, B3 is very fun, very exciting, and while it hasn't really changed its formula, I honestly don't think it needs to. I came in expecting another Borderlands game - and that's what I've gotten, with upgrades that I enjoy. I can definitely see myself playing this one two or three times with different characters.

4/5 stars, with one deducted because people ARE experiencing lag times, and as a caveat because I haven't finished the game.
Read more
9 people found this helpful.

Mike Nomadic
4.0 out of 5 starsLag on XB1 Very Good on XB1X
28 October 2019 - Published on Amazon.com
Platform For Display: Xbox OneEdition: Super DeluxeVerified Purchase
Updated Review:
The old review still stands as one star, for the XBOX ONE. The updated review is four stars because I bought an XBOX ONE X. This has vastly improved the lag. I’m. no longer seeing lags during game play. The lag on the XB1 was so bad it was unplayable in certain area with lots of enemies. Once I cleared that are and went to the boss area the lag was gone. The XB1X however has not given me any battle time lag. The menu is however still lagging but not as noticeable as the XB1.

I still very much dislike the Halloween event. They should have allowed that to be optional. They have listened to players and cut back on the annoying ghosts, but they are still there and cause annoying effects one they hit you. Thankfully I discovered you just need to play offline and this goes away. It ends December 5th, so I’m presuming those getting it for Christmas won’t have to suffer through this abomination.

There have been weekly improvements by 2K to fix the many issues, including drop rates. I switched characters since I posted the original review and game play is much better. Not only did this make it easier and more enjoyable, I’ve learned to listen to the online reviewers stating that Zane completely sucks. He is or was underpowered. There have been updates to him but I have not gone back after playing FL4K.

So don’t buy this for an XB1, but yes to buy for XB1X. Don’t play Zane he sucks, do play FL4K. Play offline until December 5th as the Bloody Harvest Event is just not fun. Especially when all you get are green items. I’ve finished the Bloody Harvest boss 4 times with only one rare, no epic and no legendary items. It’s too annoying for too little reward.

Old Review:
The laggy graphic and horrible dance music and the usual distracting noise techniques these developers use makes this game a wait to buy - and only if they start fixing the lag and lowering the price.

Constantly changing weapon types to match the changing needs form shock to corrosive, etc means you will constantly be waiting on the laggy graphics. Graphics that in BL2 of the cartoon nature, which was great, have been applied to the menu selection of weapons. You can’t tell what kind of weapon is in your bag by looking at it - because a cartoon shotgun, sniper rifle, AR, pistol all look alike. So you have to slowly scroll through each one to see the description where and actual representation of a shotgun or pistol, etc can be seen. By the time you change, you’ve lost your momentum in the game and your going to have a bunch of money taken away again by dying.

The first DLC for Halloween is just horrible. Save your money! A constant barrage of darting skeleton ghost heads shrieking at you. These dumber than dumb objects belong on Nintendo games like Mario Brothers not in Borderlands.

I also just love fighting bosses, dying several times losing several thousands on to get nothing but greens. One semi-boss even dropped junk white gear after killing me twice. Just not worth the aggravation.

If your going to buy this wait for that $20 price and skip the season pass. Then when you get frustrated with the game, go back to BL2 which was fun and think to yourself, that only cost me $20 to find out it was garbage, not $75 (as of today) The price just keeps going down because the game is a dud!

A little correction, as I’m reading some posts I’m seeing that the Halloween event is not the season pass DLC but rather forced onto everyone and is almost universally hated. Another reason to skip this as you can’t opt out and it lasts until December.
Read more
6 people found this helpful.

R. Corvin
2.0 out of 5 starsAll style and no substance
28 September 2019 - Published on Amazon.com
Platform For Display: Xbox OneEdition: Super DeluxeVerified Purchase
It's evident that the creators decided to just make pretty weapons instead of competent game play. Gun mods or skills that's supposed to improve gun play have no evident effect. They've added the ability to mantle objects and placed collectibles in places where you have to jump to get to but made the jumping mechanics God awful. Evidently the Vault Hunters lack the ability to reach out and grab a ledge making you have to get in the perfect spot to mantle. Then after you land on whatever you're jumping to, your character lacks the ability to just stop there but has to move forward a couple steps causing you to sometimes fall off of the other side of the object you jumped onto. I won't even talk anymore about how many times the game has froze on me or the issue where when I leave the controller in a neutral position, my character just slowly moves backwards. Thought I was having issues with my controller but BL3 is the only game that does that.
Read more
7 people found this helpful.
Go to Amazon.com to see all 146 reviews 4.1 out of 5 stars

Platform For Display: Xbox One | Edition: Super Deluxe
Free & fast delivery, movies and more with Amazon Prime
Prime members enjoy free & fast delivery, exclusive access to movies, TV shows, games, and more.
> Get started
Back to top
Get to Know Us
Connect with Us
Make Money with Us
Let Us Help You
© 1996-2020, Amazon.com, Inc. or its affiliates