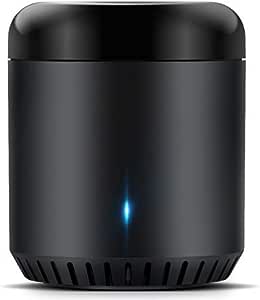 harborsparrow
4.0 out of 5 stars minimally worked right out of the box for my purpose
7 December 2017 - Published on Amazon.com
I've been wanting some voice control over my television recently, since I have Amazon Alexa working for various other home automation including the thermostat, smart light bulbs, and smart switches on fans. So given the low price and small physical footprint of this thing, I ordered it with fairly low expectations (after reading Amazon reviews, of course!).

What I wanted, minimally, was to be able to say "Alexa, turn OFF/ON the TV" (I have Verizon FIOS with a Samsung LED TV). Miraculously, I was able to set this critter up right out of the box to do that. However, I don't think many people would have been able to do so. First, there is a serious lack of documentation on this device. It did come with a minimal product insert, but even with help from Google, I had to flounder around for about an hour to figure out how to set it up.

First problem was, that there is no power supply. There is a power supply CABLE, but no AC converter, and it's important to get exactly the right kind. It took me a few minutes to find one in my house that fit the bill (500 ma was the sticky wicket) and cannibalize it for use with the RM mini 3 (a.k.a., the "black bean"). I still have to replace that power supply somehow, and I'm not even sure what device it came with.

Second, the little product insert that came in the box, the so-called "user manual", is pretty minimal. It told me to find the needed app for my smartphone by scanning a QR code or searching on the name of the device in the Google Play Store. When I searched in Google Play, it brought up dozens of apps; the most likely one (the Broadlink "e-Control" app) clearly did not support RM mini 3. So I found and installed a QR code scanner (had to try 2 different ones to find one that worked right) which let me browse to a website and install the correct app. All of which just redirected me back to the incorrect "e-Control" app. But I installed it anyway, and then it volunteered by some slight of hand to install the app that I really needed, which is called IHC (for, I think, "Intelligent Home Connection"), also a Broadlink app. This latter app seemed to work as the minimal setup instructions suggested.

From there, I had to move my Android phone right over next to the RM Mini 3 (i.e., within 1 meter of it) to begin the setup process. First, it required me to create a Broadlink account (which required me to get and enter a code sent either to my smartphone or via email--I chose the smartphone). Once that was done, it offered (I'm sure I clicked somewhere to initiate that offer) to find my TV, and then my set top box. After finding each device, it went into a quite unfriendly mode where it asked me to verify functions by first clicking on a button the app showed me, and then verifying whether clicking that button had done the same thing that a similar button on the physical remote would do. Thankfully, I managed to get the ON/OFF button working for both the Samsung TV and the Verizon set top box right off the bat.

The final, and equally confusing step, was to link my Broadlink account with Amazon Alexa. I following online instructions by bringing up the Amazon Alexa app, going into the settings there for "Skills", and searching out and enabling the Broadlink Home Automation skill. That linkage required me to tell the Alexa app how to logon to the Broadlink app (in my case, mobile phone $ and password). After all that was done, it started working.

So now, I can just say "Alexa, turn on the TV" or "Alexa, turn off the TV" and it works. We can also say "mute/unmute the TV" and "change the set top box channel to 589" and "lower the TV volume by 10". My husband particularly likes that last one, because it can take a while to lower the volume of the TV drastically using the real remote.

Given the poor docs, I'd be tempted to give it only 3 stars, and I certainly can't give 5 stars. But let's face it--the price is right. This is the lowest cost home automation device imaginable, costing barely more than a single Philips Hue smart bulb (of which I own many), and it did do the main thing that I required almost directly right out of the box. Finally, it looks cute. So for now, 4 stars seems right. We'll see how it holds up over time, and how difficult it's going to be to troubleshoot in the future. I may post a followup to this review when I find that out.
Read more
189 people found this helpful

Michael F.
4.0 out of 5 stars Read this if you want Alexa to control IR devices.
27 July 2017 - Published on Amazon.com
Verified Purchase
I'm loving this thing, I got it to have Alexa control my air conditioner and TV and after some time getting 3 different apps to work together I was able to get it to work!
I'm only rating this 4 out of 5 stars because I wasn't able to get it to work the way it's supposed to. It seems that the ihc app only lets Alexa control TVs, so I had to trick it by using a default TV remote (in the app) and reprogram the button commands with my existing AC remote, then I just renamed it to "Air Conditioner". I have to tell Alexa to "turn the volume up" to get my AC to turn the temp up and "turn the volume down" to turn the temp down... Silly, but it works. So, for those who want their Alexa device to control things that are ir controlled, do this:
1- Get this ir blaster
2- download the Broadlink e-control app
3- download the ihc app (Intelligent Home Center)
Read more
76 people found this helpful

Brad Jones
3.0 out of 5 stars This could be incredible, if they'd just open the API
4 April 2017 - Published on Amazon.com
Verified Purchase
This could be an incredible device.

Unfortunately, the manufacturer has decided to cripple it by not exposing actual APIs so that it can easily tie into smart home systems. Instead, you can only use it through an Android or iOS app.

If this had IFTTT support that didn't involve tying up a spare Android device to act as a bridge, it'd be 4, even 5 stars. But because the manufacturer has decided to artificially limit it, 3 stars, and that's being generous. The only reason it gets 3 stars is the RM Bridge app.
Read more
50 people found this helpful

R. Goldstein
5.0 out of 5 stars Works perfectly. Ignore the negative reviews
17 December 2018 - Published on Amazon.com
Verified Purchase
I do not understand all the negative reviews. I was very hesitant after reading the bad reviews, but I took the risk and ordered one of these to try out, to add Alexa voice control to a Vizio TV. It worked perfectly. Setup was easy, right out of the box. Alexa integration was a breeze. After having a positive experience with that one, I ordered 2 more for other rooms. It was a very easy to add these into the IHC app, and set them up. Each time, Alexa easily discovered the additional TVs. Now I have voice control of TVs in 3 different rooms. Could not have been easier. I do not know why so many people are giving this low marks, but my experience was definitely 5-stars. Well done Broadlink!
Read more
31 people found this helpful

Jeffrey S Spatz
1.0 out of 5 stars The device works great so far
4 December 2017 - Published on Amazon.com
Verified Purchase
Update: stopped working with Alexa early November. Says "tv is not responding...". Please fix.
The device works great so far. I only hit if for one star because the original app requires you to have an existing remote for programming which can be time consuming and problematic if you had lost an old remote. There is a second app that can also be used and is necessary for Alexa. I used that one to set up Alexa, but prefer the first app for my phone remote control. I use the device to control my Sony TV from my phone and Alexa. With Alexa I can control channels, volume, and power on and off. The application does not have dvd players as a basic option either so you must have an existing remote control in order for the blaster to learn the signals. I have not been able to get Alexa to power any other devices besides the TV. Set up is the same as all other smart devices, so if you are familiar with the whole "download manufacturers app first, plug in device, add device in app, input wifi password, then add device in Alexa app" thingy you won't have any problems. If you are new to smart devices, the instructions may be difficult to understand. The whole process is very simple, quick and painless. I had mine going in less than 60 seconds and it works great. I say "Alexa Turn on TV" and boom, my TV is on. The cell phone remote works nice too. I just want to be able to say "turn on my DVD" or "turn on my Fan" too. I will update if I have any issues in the future.
Read more
17 people found this helpful
Go to Amazon.com to see all 623 reviews 2.8 out of 5 stars
Back to top
Get to Know Us
Connect with Us
Make Money with Us
Let Us Help You
© 1996-2021, Amazon.com, Inc. or its affiliates