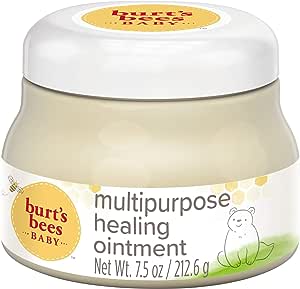 Burt's Bees Baby 100% Natural Multipurpose Ointment, 7.5 Ounces (Packaging May Vary) this product has the above mentioned characteristyics all aong with in it with which have following couints of tablets also.

Lavish your little one with love

Burt’s Bees Baby Moisturizers are made with naturally soothing ingredients like Shea and Jojoba Butter and Apricot Oil, so you can have peace of mind when it comes to keeping your baby’s skin feeling cuddly soft.

Natural care for baby and mama

Nurture naturally from head to toe

My son has eczema which is exacerbated by heat & drool. It's especially bad on the front of his ankles where it gets a little inflamed & scabby. He also scratches at it if I don't put vaseline or oatmeal based creams on it. On his lower cheeks, chin, jaw and neck it gets pretty bad because of all the drool. Of course I do my best to keep it dry, and I put a vaseline barrier as often as I can, but it's often pretty red and splotchy. Especially when the heat & humidity hit (we're in Hawai`i).

As the doctor and other moms have recommended, I use a vaseline or aquaphor barrier, and twice a day I'd apply Babyganics "Bye bye dry" eczema care cream, and if it was bad enough hydrocortisone cream/ointment or desitin. These things all worked a bit, sometimes his skin would look almost normal, but it wasn't 100%, and there were too many occurrences of rash or scabbing. More recently eczema patches have been popping up around other areas on his body, so I really felt like I wanted to try something new.

I decided to give this a try and I'm really glad I did. It came in yesterday and I applied it before bedtime after making sure I cleaned and dried all the affected areas first (particularly his face/neck because of the drool). This morning I checked him out and no kidding, his skin is clear. There's still evidence that he had something wrong with his skin, as the pigmentation is a little lighter, but all the redness & inflammation is gone, and besides a few tiny scabs on his ankles, they are also clear.

I really wish I had taken before & after photos, but it's too late for that now, and I'm not about to let his rash come back just for that purpose, so I'm hoping this review is enough to encourage other mom's out there to give it a try.
Read more
262 people found this helpful

Sofia
5.0 out of 5 stars GREAT PRODUCT FOR DRY SKIN
27 July 2016 - Published on Amazon.com
Size Name: Pack of 1Verified Purchase
Wonderful product got rid of my babies (twins) dry & peeling skin within a few days. I recently started using it again as both my babies have eczema & its day 3 using this product and already I have noticed a difference in their skin. The only con i can say about this product is that when you first apply it its greasy & remains like that until the skin absorbs the product but i rather have my babies face/body greasy to dry, chapped & flaky skin!
Read more

5.0 out of 5 stars GREAT PRODUCT FOR DRY SKIN
Reviewed in the United States on 27 July 2016
Wonderful product got rid of my babies (twins) dry & peeling skin within a few days. I recently started using it again as both my babies have eczema & its day 3 using this product and already I have noticed a difference in their skin. The only con i can say about this product is that when you first apply it its greasy & remains like that until the skin absorbs the product but i rather have my babies face/body greasy to dry, chapped & flaky skin!
Images in this review

BhB
5.0 out of 5 stars LOVE IT
24 October 2018 - Published on Amazon.com
Verified Purchase
No babies at our house but I have recurring eczema and its really helping. Previously, I swore by Aveeno's Colloidal Oatmeal, which is every effective for the itching. The Aveno's didn't seem to actually help clear up the skin though and the Burt's Bees is.

I've also tried Aquaphor but that's nothing but very over-priced petroleum jelly like Vaseline. I've read that petroleum jelly dries the skin and since I stopped using petroleum-based (mineral oil) lip salve, I've noticed improvement. Same with face cremes - no more mineral oil for me! For use on babies, I'm sure the petroleum jelly is useful as a barrier.

Not greasy and the jar is a very generous size. I save the tiny jars from various cremes, wash them out and use them for other things. I filled a small jar with this Burt's Bees Baby Ointment and keep in next to my chair so I can daub it on when I need it. For my purpose, a little goes a long way so it will be a while before I reorder.

Alicia Walters
5.0 out of 5 stars Amazing!!!
13 November 2018 - Published on Amazon.com
Size Name: Pack of 1Verified Purchase
First off let me start by saying I rarely leave product reviews but I felt compelled to leave one on here. My 3 month old son has struggled with BAD eczema since he’s been born. It gets rough, red and bumpy all over his body except feet, hands, back and diaper area. I tried numerous creams and lotions that would leave him screaming after I applied them.. then I find this one, he had instant relief. He didn’t scream when it was on and I seen results after one day of applying. His skin now just look a little flaky from time to time and it’s very minimal. It’s also a little rough still but his redness and bumps are completely GONE!! Plus it smells good. I will not be using anything else until his skin is better and here’s why... I just tried Exzema Relief by TriDerma Baby today because his skin was looking so good I figured let me see if I can help the roughness with something different because he’s getting older and I was thinking maybe his skin was getting better too. So I tried it and he INSTANTLY broke out in red bumps and was crying so I rushed him to the bath and reapplied this. I know this is long but this ointment is at least worth a try if you are struggling with what I was. I am a real mom and this is a real review.

The only con:: is it will rub off on your clothes so I always make sure he is in his feetsie sleepers so he’s fully covered. I put it on every night before bed.
Read more
33 people found this helpful

Originally, I picked this up from Target, as a "why not" purchase. I decided to try this on his diaper rash problem, since it would make a nice barrier between his skin and the diaper AND it was 100% natural. Within 2 days, his diaper rash was gone! I kept using it and he never had it again, UNTIL my mother-in-law visited and regardless of me telling her to use this ointment, she slathered the Desitin all over my poor boy. It irritated his skin and the diaper rash came back. Once she left, I only used this ointment and within a day it was back to normal.

I needed a new jar right away, so I ordered it through Amazon & I plan on doing subscribe and save, so we never run out suddenly. I love this stuff!
Read more
60 people found this helpful
Go to Amazon.com to see all 1,715 reviews 4.4 out of 5 stars
Back to top
Get to Know Us
Connect with Us
Make Money with Us
Let Us Help You
© 1996-2021, Amazon.com, Inc. or its affiliates