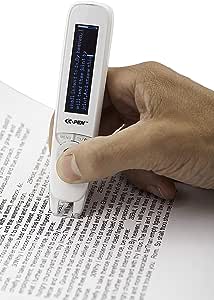 Kindra
5.0 out of 5 stars Great Assistive Technology for those with reading difficulties such as Dyslexia
25 July 2017 - Published on Amazon.com
Verified Purchase
The C-Pen Reader works great! We ordered this pen for my brother who is in the 3rd grade with a diagnosis of dyslexia. We purchased this specific C-Pen Reader because I am a Special Education student teacher and had the opportunity to work with a 7th grade student who also has dyslexia and I saw the great benefit for him with using his C-Pen Reader.
My student uses the C-Pen in his schooling especially for his science and history classes where the vocabulary level in the textbooks are beyond not only his reading level, but the 7th grade level as well! His favorite parts about the C-Pen Reader are the headphone capability (as to not bring attention to his usage) and the dictionary function!
As for my brother, he uses the C-Pen so far in his general classes, but we have seen the most improvement in his math ability as he is able to use the C-Pen to read story problems, which have caused him great difficulty. After a conference with his IEP team, it was agreed that he could use the C-Pen for all reading except for his actual Language Arts class where he is assessed for his reading skills. Because my brother is in another district than where I receive my practicum, it was great to bring this technology to the attention of his Special Education Co-Op.
Outside of school, my brother has also found that he likes using the C-Pen for reading at home. Because of his dyslexia, reading has always been difficult therefore he has not enjoyed the act of reading in any capacity. My brother loves dinosaurs, and with the C-Pen, he has chosen on occasion to read at home, which have some difficult vocabulary, but that hasn’t stopped him!
I wish that more families and educators would be aware of assistive technology such as the C-Pen Reader to bring relief to people who do have reading difficulties.
As a side note: the original pen that we received had an issue with the MENU button, but the company was great at getting back to us and sending us a new unit. The pictures attached show the new pen with menu items to navigate to the volume control

Amazon Customer
3.0 out of 5 stars Usefulness is very user-skills dependent.
28 December 2017 - Published on Amazon.com
Verified Purchase
Product arrived promptly, and worked out of the box. I returned it, however, because it didn't suit my purpose. I figured that a review of what it did well, and what was less good in my context might help.

Essentially, I noted two potential problems, only one of which was a problem for me. First, this would have been for my college-age, mildly dyslexic daughter. She can read well enough to enjoy fiction, but it's definitely a mental effort for her, and as such, the process of reading a textbook is less effective than it should be, since a chunk of her brain power is taken up with reading, and therefore less brain is available for comprehension of the material. So, we tried this. It worked, recognizing the letters and words of a book with high accuracy. However, the reading voice is stilted. It's better than Steven Hawking's famous synthesized speech, but it definitely lacks the natural inflection that makes normal speech readily comprehensible. On balance, my daughter found that it was more cognitive effort to understand the device's speech (while simultaneously controlling the sweeping of individual lines of text accurately) than it was to make the effort to keep track of the words and "take charge" of her dyslexia. If you're in a similar situation, I suspect that the only way this evaluation can be made is by trying it out; each person's struggle with dyslexia will, of course, be a very personal, very individual, level of effort, and as the balance changes, so would the value for that individual.

The other potential problem for some users would be that the device requires a decent degree of manual dexterity (which in turn requires mental focus) to track the line of words. My daughter has absolutely no problem in this respect, but when I tried it out myself (my brain function, dexterity, and reading skills, are definitely unimpaired) even I noticed that some focus on line-tracking was necessarily part of the act of using it. It can be likened to trying to draw a reasonably accurate pencil line along one line of text, never straying outside the boundary of that line (or it will start reading the wrong words from the line above or below). For some folks, that level of dexterity will be unreasonably draining (or outright un-achievable, I suppose). My guess is that if you have the intended user draw pencil lines on the lines of words in a book, you'll get some idea of whether this is a problem, non-issue, or flat out non-starter.

The stilted reading style is exacerbated more than a little by having it read the lines as it scans them. The result is usually that it reads one line, then pauses while you're lining up to read the next line (and the user must be capable of determining which line to scan next, of course!) This pause could be avoided if you simply scan an entire chunk of text into memory (which it appears it can do), and have the device read it afterwards. On this topic, however, I suspect that it would be more efficient to use a flatbed scanner, OCR software in a computer, and then let the text to speech feature of your computer read the document.

I should add that there was no issue whatever with my return, shipping in both directions being taken care of by Amazon, or the seller. I'm a Prime member, which might have influenced that, but the general policy was such that returning it was not a problem.
Read more
123 people found this helpful

T C.
5.0 out of 5 stars and I think this one sounds more like natural speech
1 September 2016 - Published on Amazon.com
Verified Purchase
I bought this pen for my 11 year old daughter. We have never used a reading pen before, so I can't speak for any of the other pens on the market, but this pen appears to be the smallest and easiest to handle. I have also listened to some of the other voices, and I think this one sounds more like natural speech. We live in the US and the pen has a British accent, but she likes the way it sounds so we haven't tried to Americanize it, although it may be possible. It is surprisingly easy to handle and can be moved quickly across the page. My daughter sometimes has problems with catching some of the line above or below the line she is reading which makes it say nonsense, but it just takes a little practice. It can read most fonts ( and occasionally even handwriting) as long as the size fits in the "window" thing at the end of the pen. It helps if you look at the words through the clear plastic end as you scan across the line. We have really only used the pen for reading, although it has a dictionary, ability to store text, and a voice recorder. It only took a few minutes to figure out how to use it. I like this pen and am glad we got it.
Read more
125 people found this helpful

A Grac
4.0 out of 5 stars Blessing pen
17 October 2017 - Published on Amazon.com
Verified Purchase
My daughter is overjoyed at reading with this. She is dyslexic and has auditory processing issues. She just excitedly told me about a book she just read. The details she took away using this was amazing. It’s a little glitchy this the 4 stars. Worth it tho
Read more
44 people found this helpful

Amazon Customer
5.0 out of 5 stars Wonderful
4 January 2017 - Published on Amazon.com
Verified Purchase
The C-Pen is great. I love to read, but I am a very slow reader, which made getting through technical writings almost impossible. With the C-Pen, I can now read those very boring technical books I have. It's easy to use. It's easy to hold. It has a great battery life. The only negative and not much of one is that if you hold it at too much of an angle, it will give you gibberish. I wish I had this pen when I was in college. My grades would have been a lot better.
Read more
49 people found this helpful
Go to Amazon.com to see all 163 reviews 3.9 out of 5 stars
Free & fast delivery, movies and more with Amazon Prime
Prime members enjoy free & fast delivery, exclusive access to movies, TV shows, games, and more.
> Get started
Back to top
Get to Know Us
Connect with Us
Make Money with Us
Let Us Help You
© 1996-2020, Amazon.com, Inc. or its affiliates