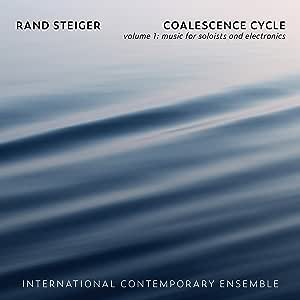 Share
Only 2 left in stock (more on the way).
International product from outside Singapore Learn More.

Secure transaction
Your transaction is secure
We work hard to protect your security and privacy. Our payment security system encrypts your information during transmission. We don’t share your credit card details with third-party sellers and we don’t sell your information to others. Find out more
Details
Ships from
Amazon US
Sold by
Amazon US

Composer Rand Steiger releases the first volume chronicling his collaboration with the International Contemporary Ensemble, Coalescence Cycle. Volume 1 highlights works Steiger wrote for soloists in ICE (Claire Chase, Josh Rubin, Rebekah Heller, Kivie Cahn-Lipman, and Jacob Greenberg) that feature real time electronics processing, virtuosic writing tailored to the dedicatees of the works, and an approach to harmony that explores the intersection of tempered and just intonation material. Rand Steiger's music has been commissioned and performed by many distinguished soloists and ensembles and has been presented in concert halls and at festivals internationally. Throughout his career, Steiger has been involved in computer music research, having held three residencies at Ircam, and enjoying a long fruitful collaboration with leading computer music researcher Miller Puckette. He was Composer in Residence at the California Institute for Telecommunications and Information Technology from 2010 to 2013.

JODY DEBONILLA
5.0 out of 5 stars What blissful music
4 June 2019 - Published on Amazon.com
Verified Purchase
"New" classical music often is a challenge to understand and enjoy. This piece is haunting, beautiful and quite understandable. Bravo maestro Steiger!
Read more

Fanfare Archive
5.0 out of 5 stars A unique and exploratory vocabulary that operates on many levels
14 August 2019 - Published on Amazon.com
Colin Clarke, Fanfare magazine

Exploratory would seem to be the mot juste here. The music of Rand Steiger seeks to explore the merging of separate sounds into one, while the natural intervals of harmonic series act as Steiger’s guide to generating pitch structures. The result is a unique vocabulary that operates on many levels.
The first piece is Cyclone (2013) for clarinet and electronics. The soundscape is at once alien and frozen, yet hypnotic. Inspired by the actual event of two tornadoes in Brooklyn, the electronics sweep and spin the musical material. The title also makes reference to a roller coaster on Coney Island. The interactions between the fabulous playing of clarinetist Joshua Rubin and the electronics are a model of the kind, with Rubin ever sensitive to his musical environment.
Scored for flute/piccolo and electronics, Beacon (2015) boasts a fascinating premise. Not only does the title refer to the activities of its dedicatee and performer here, Claire Chase, but also to an imagined beacon that calls to extra-terrestrial life via gestures inspired by Varèse. The alien life is found, a dialogue ensues, and there is a final place of reflection. While this all sounds very programmatic, the piece has a lyricism that runs through it that perhaps, on an underlying level, speaks of the yearning for mankind to learn that we are not alone in the Universe, or of a particular type of deep-set loneliness. Claire Chase is totally attuned to Steiger’s language.
The solo instrument for Mourning Fog (2012) is a cello, here played by the eloquent Kivie Cahn-Lipman. By far the most reflective of the pieces so far, Mourning Fog refers to the mornings (as in time of day) around the coast of San Diego, often cloudy and foggy. As the day progresses this lifts to reveal sunshine and hope. The composer takes this as a metaphor for his personal loss. It is astonishing to find that all of the sounds here are taken from the cello, such are the levels of transformation (all of which conform to the general mood of the piece). At over 17 minutes, this piece is pretty much as long as the first two combined, and this increased sense of space allows the music itself to breathe, reflect at leisure, and explore its own pain in its own time. Again inspired by natural phenomena, this time the reflection of light off the Los Peñasquitos Lagoon, Light on Water (2012) for flute, piano, and electronics is a study in silvery delicacy. Jacob Greenberg’s traceries ideally complement the agility of Chase’s flute, resulting in an experience as elusive yet as special as the moment light reflects off water. The combination of Chase and Greenberg is a winning one. Think, perhaps, of a Modernist Ravel, and you have an “in” for the piece.
How ethereally Light on Water ends—just the perfect stage for the sudden interruption of a low bassoon virtuosically negotiating its nether regions. Composed in 2012, Concatenation for bassoon and electronics is a “nested études” piece, the idea of which is that there is a set of contrasting materials, any part of which could form the basis for an étude, become the basis of an ongoing “conversation.” Here, Steiger presents seven different types of material, each with a different approach to signal processing, and each with a label (“Fog,” “bloom,” etc). They are presented in order (and therefore there is something of a sectional nature to the piece early on) before engaging in conversations with one another. Rebekah Heller is a stunning bassoonist. She needs to be, as Steiger’s demands are constant; and how fascinating to hear her in dialogue with her own sounds.
The electronic soundstage for these works was developed by the composer in association with Miller Puckette and his Pure Data software environment. Steiger’s explorations in Digital Signal Processing (the real-time alteration of sounds) create fertile ground indeed. The result is a brilliant exploration of not only soundspace but also of the expressive nature of tuning. The truly great news here is that this is volume one.
The documentation spoils us. First, there are individual notes on the pieces, plus an introduction, by the composer himself. This is followed by an extended and excellent essay by Lukas Schulze. Perhaps a listening strategy might be to save Schultze’s essay until after the music has been heard a couple of times; there is so much to be gleaned that way.
Read more
Go to Amazon.com to see all 2 reviews 5.0 out of 5 stars
Back to top
Get to Know Us
Connect with Us
Make Money with Us
Let Us Help You
© 1996-2021, Amazon.com, Inc. or its affiliates