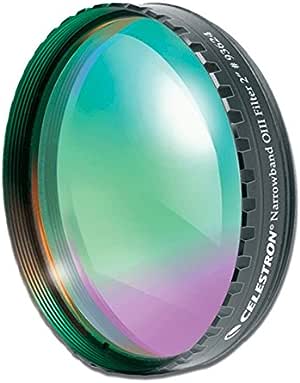 The 2" OIII narrowband filter isolates just the two doubly-ionized oxygen lines (496 and 501 nm lines) emitted by planetary and emission nebulae, while blocking the rest of the overall spectrum of light. The result is extreme contrast between the black sky background and the faint photons of OIII light needed for detailed views of the Veil, Ring, Dumbbell, Crescent and Orion nebulae, among other objects. Each filter has an ultra hard, vacuum-deposited coating carefully designed to block all of the visual spectrum ranging from 400 to 700 nm This eliminates the un-natural colored halos surrounding bright stars common with O III filters of less sophisticated coating technology.

JC
4.0 out of 5 stars Overall, happy with this purchase
13 April 2018 - Published on Amazon.com
Verified Purchase
It works as it's supposed to. I'm a low-budget backyard astronomer, but I won't settle for absolutely useless astronomy accessories. It seems to be the Baader filter rebranded. I purchased the UHC/LPR by Celestron, and it, too, is a re-branded Baader clone. Visually it works to make some nebulae stand out more, and will wait to see how it performs in astrophotography. I'm new to the hobby (since April 2017), and do not see myself spending more money to do much more than what I do now visually or photographically.

I use the filter on my Explore Scientific 2" diagonal as well as on individual 2" eyepieces. Works the same in either position for visual. My scopes with 2" focusers are an 80mm (ST80) and 127mm (AR127) achromatic refractors and a 180mm mak-cass. The difference this filter makes is mostly subtle, so you need to know what to look for. In the case of this filter, you should expect more noticeable nebulosity. It does make the view dimmer, though. The Orion and Ring nebulae didn't really look that much different through my mak-cass, but I have yet to try the filter on my 127mm and 80mm refractors.

The build quality is very good. Overall, I am happy with this purchase.

JRen
5.0 out of 5 stars Very good performance and price
20 April 2013 - Published on Amazon.com
Verified Purchase
I've used many different types of filters by Orion, Lumicon, & Meade. This Celestron O-III filter performs right up there with the premium brands. I've been able to use it in skies ranging from magnitude 3 urban white zone to a magnitude 7 blue zone. The visual contrast can be quite noticeable depending on what type of nebula you are viewing and the seeing conditions. I primarily use it with an EdgeHD 11" OTA which gives great results at 100x to 150x. I've also used it with a 120mm APO refractor which is smaller than recommended for this aggressive of a filter. Yet is still works well and give nice wide field views on the brighter nebulae. I wouldn't use with with smaller planetary nebulae or HII type emission nebulae. the threading is particularly nice it easily fits onto the 2" eyepieces much better than Orion filters. I've dropped it on payments a couple times in the dark and no scratches or dings to the glass. Very well constructed.
Read more
7 people found this helpful

Kenan Jabr
4.0 out of 5 stars Great for nebula lovers AND affordable.
3 December 2014 - Published on Amazon.com
Verified Purchase
Do not buy this expecting it to help out with seeing galaxy details. Galaxies are usually just diffuse blobs of light, and you'll need extremely dark skies to see any detail in them. No filter can help with that.

However, it's great for nebula of all kinds: Orion, Dumbbell, Lagoon, Swan, Ring, etc. Personally, I'm more of a fan of the UHC filter: it does the same thing as this, but doesn't dim the object as much. Still, this nebula filter is pretty great. You won't be disappointed in getting either this or the UHC.

The reason I have to give it only four stars is simply because it gets jammed entirely too easily. It took me days to get it off an eyepiece of mine because I made the mistake of securing it on. Pro tip: always leave a bit of slack when twisting this onto the bottom of the eyepiece.

Important tip: This filter CAN be used with 1.25 inch eyepieces. All you'll need to do is screw it onto the bottom end of the 1.25 adapter. Yes, there is a screw slot there. I only recently figured this out.
Read more
3 people found this helpful

R. Sakala
5.0 out of 5 stars Good Product once you get a new one shipped to you.
6 August 2013 - Published on Amazon.com
Verified Purchase
This rating is for the product which is new. Works well on nebulae, But I got 2 USED ones sent to me from Amazon. They must have been returned and then shipped to me. TWICE! The third time was the charm, but this should never happen. One was loose and full of dust. However, Amazon stepped up to the plate and replaced and gave me a discount on the last one. But that is a reaction to a situation that shouldn't happen in the first place. Amazon, inspect your returned items and mark them as 'returns' or 'used' and we'll know it from the beginning.....
Read more
6 people found this helpful

Harry Abramson
5.0 out of 5 stars Celestron 2-inch O-III filter
9 September 2008 - Published on Amazon.com
Verified Purchase
I can't compare this filter to its counterparts from Lumicon, Orion, Thousand Oaks, or others, since I don't own and haven't tried any of them. Physically, the Celestron looks identical those offered by Baader Planetarium--I've never seen any other make with those square serrations along the perimeter.

We still haven't been out to our dark site with the O-III yet, but I did give it a quick try a few weeks ago at our local community college, where we usually just do planetary viewing due to the excessive light pollution. I inserted the O-III in our filter slide and pointed it toward M57, not expecting very much. After all, the Ring is supposedly better suited to a UHC filter than the O-III. The results were absolutely stunning--the nebula appeared as a distinct greenish ring against an inky black background. I then changed to a longer FL EP and directed our CPC 925 to slew over to M27. Usually we can't see the Dumbbell from the college and that night was no exception. Not knowing whether it was even in the FOV, I slid in the O-III filter and the nebula just popped right out, nearly dead center, and with as clear definition as we usually get from the dark site (Bortle's green) with no filter at all.

We will definitely be picking up the UHC and h-beta filters to join this one. At more than twice the price, I can't imagine how the Lumicon O-III could be twice as good as this one, so I'm very satisfied with the Celestron filter, both in performance and value.

UPDATE 7 Sep 2012: Well, it's nearly four years to the day since I bought this O-III and the other Celestron filters, and we've used them at multiple locations under suburban skies, as well as at our dark site. About the only thing I can add is that performance has been fully satisfying in every respect and each filter still looks as good as the day I received them, both optically and physically. I must admit, however, that they live a very pampered life--we use them exclusively in the power/filter slide on our EarthWin binoviewer, and I purchased several additional pairs of carriers so that I never have to swap any filter in & out of a carrier frame. Once mounted in its carrier, each unit only leaves its plastic case long enough to slide it into the binoviewer assembly. (The same carrier also fits newer Denks since they and EarthWin are co-owners on the patent for the power/filter slide system.)

I was very surprised to see the 1-star review posted today by Allen Andrews, since my experience with this filter has been very positive. In fact, I dug out the original packaging for my O-III filter because I didn't remember it arriving in the kind of puzzle box that Allen describes. Sure enough, mine came in a clear plastic hinged storage box similar this one, but smaller: http://www.amazon.com/BCW-Trading-Capacity-Hinged-Holder/dp/B005KDHJBU/ref=pd_sim_sbs_sg_8. It was lined with a thin sheet of foam and the small plastic box was packed inside a slightly larger cardboard box. Fit and finish on the filter appeared flawless right out of the box and I screwed it onto a few different brand EPs and our 2" Zhumell Barlow just to make sure there were no problems with the threads before mounting it in the power/filter slide carrier frame. Allen's review makes me wonder if maybe Celestron is now using a new supplier for this filter and the quality isn't what it used to be. I would recommend that anyone considering this product consult reviews on the astro-vendor websites like Telescopes.com or OpticsPlanet.com, and maybe check the Cloudy Nights forums for any relevant discussion threads.

I must also add that my own experience with Celestron products in general has been the exact opposite of Allen's. I have a Celestron CPC 925 GPS SCT purchased in 2007. It is one of the Chinese-made models, but it has been an exceptional scope in every regard: optically, mechanically, and electronically. I can't say the same for my three Meade scopes--two Newtonian reflectors and an ETX-125 Mak-Cas, all of which came out of the box with various defects ranging from clouded mirrors to faulty drive mechanisms and missing parts. A tripod foot cracked and broke on one of our very first outings with the ETX, even though we always set up on vibration isolation pads. However, I agree with Allen that you can't go wrong with any filter made by Tele Vue or Thousand Oaks, and I'd also add Lumicon to that list. For the money, though, I'm still very pleased with our Celestron nebula filters and OWL Astronomy color filters.
Read more
20 people found this helpful
Go to Amazon.com to see all 19 reviews 3.2 out of 5 stars
Free & fast delivery, movies and more with Amazon Prime
Prime members enjoy free & fast delivery, exclusive access to movies, TV shows, games, and more.
> Get started
Back to top
Get to Know Us
Connect with Us
Make Money with Us
Let Us Help You
© 1996-2020, Amazon.com, Inc. or its affiliates