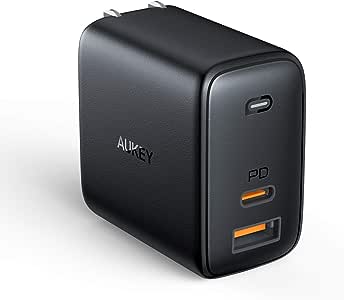 Dynamic Detect
When a single device is connected, AUKEY USB PD chargers with Dynamic Detect provide access to thefull power of the charger.
For more than one device, Dynamic Detect ensures effective simultaneous charging by intelligently distributing this power.

Advanced GaN
Experience a power revolution with AUKEY and the 'GaN' (gallium nitride) power chip.
AUKEY has built a smaller & lighter charger with this streamlined, potent power system which can deliver up to 5 times energy savings and up to 20 times improved performance compared to silicon chips.

USB Power Delivery
USB Power Delivery is a new, universal multi-voltage charging standard that dynamically negotiates power output over a USB Type-C
connection to safely and efficiently recharge a wide range of compatible devices.
Fast charge the new iPhone 11, 11 Pro, or 11 Pro Max up to 50% in just 30 minutes, and use the same Power Delivery adapter to recharge a Type-C equipped 13” MacBook Pro at full speed.
Consolidate your power with one charger for all your USB-C tech.

Reliable and Safe
Advanced circuitry and built-in safeguards to protect your devices against excessive current, overheating, and overcharging. Powerful and effective device charging without a worry.

Miguel G.
5.0 out of 5 starsSwitch Travel Charger/AC Adapter Finally!!!
19 April 2020 - Published on Amazon.com
Verified Purchase
I bought this because I wanted a smaller charger/AC adapter for my nintendo switch, the OEM AC adapter is way too big and clunky specially because it doesn't have a detachable cable. I looked at the specs on this one, and thought it might work. Well, It pretty much surpassed all my expectations, it is incredibly well built, and it does everything. It will charge the switch, charge the officially licensed power bank, and it even provides enough juice to power the dock and play on the TV. I love this thing it is exactly what I wanted and more, plus, it doubles as a charger for my phone lol. Note, you need to have a "good" usb-c to usb-c cable for it to perform as it should, I'm using the cable that came with the officially licensed power bank, so, pretty thick and something like it should have a 2 ohm built in resistor or something like that.
Read more
27 people found this helpful.

william Dunning Sr
5.0 out of 5 starsCharging does not generate heat
20 February 2020 - Published on Amazon.com
Verified Purchase
Had bought other shop fast charging, charging fast will be fever, with a heart to give back, a friend recommended this. Use once, feel the quick charge is really quick charge, there is great pd certification of quality goods, buy the upgrade of power is sufficient and stable, also able to identify different power to the device and the iPhone, quick charge temperature is very low with the official certification is not worried about machine, is now much charge really convenient.
Read more
26 people found this helpful.

Saad Idriss
5.0 out of 5 starsWorth it! Should buy
27 February 2020 - Published on Amazon.com
Verified Purchase
Absolutely worth it. This charger was a lot smaller then I expected with such output power i was amazed. Its about the same size as my airpods. It can barely fit in that coin pocket in my jeans but it does. To think this thing has the same output as my fat macbook pro charger and it has type c and the normal usb so i can charge anything i want extremely quick without the worry of the charger getting hot by my bed or deteriorating over time as quick should buy!
Read more
26 people found this helpful.

James L Harrison
5.0 out of 5 starsLittle monster that owns all.
12 February 2020 - Published on Amazon.com
Verified Purchase
The charger came in a eco friendly packaging. A high five to aukey for doing that to reduce waste towards the environment and all.

Moreover, the device itself has a premium luxury feel to it. Sleek like matte finish, along with eye pleasantly colored ports. But don't let the cosmetic fool you. It packs a powerful 65watt charge! When paired with 3amp rated or usb 3.1 rated cable. It charges my galaxy s10 in 40 minutes from 0 to 100 percent!

Monk3e
5.0 out of 5 starsVery Cool Device
27 March 2020 - Published on Amazon.com
The Aukey Omnia Mix 65W is really a very sound device. The initial shipment came in quickly with no real issues. The box at first glance is surprisingly small as you think 65W and really expect much larger. (Very impressed here). After removing the cellophane, the device comes out even smaller than the box by about 66% of the box size (we are talking tiny at this point) Labels are clearly affixed, with a welcome manual enclosed as well. Usage could not be better given the nature of the device. Phones tested on the USB-A included a galaxy s10, iphone 6s, iphone 7, LG v35 and a LG G8. As expected, each device charged like it should, including fast charge modes as necessary. The PD was used for an iphone XR, galaxy s10, LG V35 / G8 as well as 2 laptops thrown in, a Macbook as well as a Dell XPS. While the phones worked as expected ( the Samsung and LG devices had the same charge times regardless of port as expected), the laptops were the shining parts. The Macbook easily charged through the PD port, while the XPS also had zero issues which came as a bit of a surprise given the power drain the device usually has. One note to keep in mind, the Macbook worked fine with the QC port occupied by an LG device, but the XPS was a little underwhelming losing almost 18W for the PD port. The overall results did please me as well as defend the price point so I could not be happier and am looking to eventually pick up a second.

Initial impressions after getting over the size is the weight. The Omnia is not light as a feather, nor as heavy as a laptop brick. It has a subtle girth to it that indicates solid workmanship. The external materials feel neither cheap nor rushed, overall the feel you initial suspect is well made. The AC plug folds in when not in use (i.e. perfect for tossing into a backpack for travel), while also having a power delivery port and a usb-a quick charge port.

Heatwise, the Aukey under heavy load was less warm to the touch than a competitor device also under a larger load. The GaN material really shows how efficient the device is. Overall I cant really gripe against the device in any way other than the price tag is large (but it is worth it so its a push really).


Read more
27 people found this helpful.
Go to Amazon.com to see all 77 reviews 4.7 out of 5 stars
Free & fast delivery, movies and more with Amazon Prime
Prime members enjoy free & fast delivery, exclusive access to movies, TV shows, games, and more.
> Get started
Back to top
Get to Know Us
Connect with Us
Make Money with Us
Let Us Help You
© 1996-2020, Amazon.com, Inc. or its affiliates