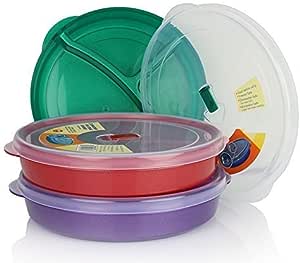 by Regent Products
4.4 out of 5 stars 1,874 ratings
Secure transaction
Returns Policy
Your transaction is secure
We work hard to protect your security and privacy. Our payment security system encrypts your information during transmission. We don’t share your credit card details with third-party sellers and we don’t sell your information to others. Find out more
New (9) from S$42.47 & FREE Delivery

Sandra Hall
5.0 out of 5 stars A great wheelchair accessory!
23 July 2019 - Published on Amazon.com
Size: StandardVerified Purchase
I am confined to a wheelchair and bought these to transport my meals from the kitchen to my room. I love them. They do great in the microwave, clean up very easily with warm soapy water, and even though the lids are not airtight, they fit snugly and keep my food from falling on the floor or slopping over on my knee and burning me. They have become an invaluable wheelchair accessory.
Read more

5.0 out of 5 stars A great wheelchair accessory!
Reviewed in the United States on 23 July 2019
I am confined to a wheelchair and bought these to transport my meals from the kitchen to my room. I love them. They do great in the microwave, clean up very easily with warm soapy water, and even though the lids are not airtight, they fit snugly and keep my food from falling on the floor or slopping over on my knee and burning me. They have become an invaluable wheelchair accessory.
Images in this review

DisneyDenizen
5.0 out of 5 stars I love these plates!
6 July 2018 - Published on Amazon.com
Size: StandardVerified Purchase
I bought these covered microwaveable plates because my daughter has odd working hours and does not eat at the same time the rest of us do. I was already in the habit of fixing her a plate, but then I either had to use cling wrap (which doesn't seem to cling as well as in the old days) or leave it uncovered. Also, she has a tendency to not finish her meal and put it back in the fridge uncovered for later. I was looking for an elegant solution, and these plates provide exactly that. Now, I fix her up a plate or two of the day's meal, and it sits in the fridge, neat and covered, until she's ready to eat. And if she doesn't eat it all, the lid goes right back on!

A word about the lids: First, the lids are a good fit. Several reviews said they weren't. They aren't so airtight that I would toss the plate in the air sideways and expect nothing to go awry, but they definitely are good for the intended purpose. That said, I wouldn't really be excited about carrying these out of the house for lunch daily, either. It's not exactly a tupperware or gladware-worthy fit. Second, reviewers expressed concern about the lid warping in the microwave. So take it off! You don't microwave a regular plate covered, so uncover this one. The real benefit of the lid is to cover the food in the fridge, not in the microwave.

I used these plates for a picnic on the Fourth of July, preloaded with food, and yes I carried them out of the house. Not only did that work out, but my MIL liked them so much that she immediately bought herself a set. It's just so much more convenient to plate your leftovers and have them ready to eat rather than leave food in larger containers for plating later. Get it all done at once! Save work later.

Lynn Swiontek
5.0 out of 5 stars Nice food storage containers
24 February 2017 - Published on Amazon.com
Size: StandardVerified Purchase
These are nice containers for leftovers. They can go into the refrigerator, freezer, microwave and dishwasher! They nest together neatly in the cabinet. They are well made and snap together tightly. These are a good buy and I would recommend them.
Read more
46 people found this helpful

Donna-Lee
1.0 out of 5 stars Junk...not worth your money
29 August 2018 - Published on Amazon.com
Size: StandardVerified Purchase
These plates are absolute junk. I've had them since only July and the covers are all warped and I wash them by hand not in the dishwasher. The covers will not attach to the plates at all. I have to put elastics around them to keep them closed. Poor quality and misrepresented by seller. And contacted seller about these failed products and he refused to get back to me. Don't waste your money.
Read more
19 people found this helpful

Lyn A
3.0 out of 5 stars Great, except for microwaving on high heat
21 July 2017 - Published on Amazon.com
Size: StandardVerified Purchase
I would have given this a 5* rating except for one thing: I wrote to e Classics to ask if the "do not heat for more than 2 minutes in M/W" apllied to time cook (high heat) or, if it had to be 2 minutes at reheat (lower heat). They responded that it "might be best at reheat setting." When removed from the refrigerator and placed in M/W for 2 minutes at reheat, meals were only warm. They were not hot. Therefore, I will not be buying more as I hoped to. For cold meals, or for warm meals, - it would be a great product.
Read more
25 people found this helpful
Go to Amazon.com to see all 370 reviews 3.8 out of 5 stars
Back to top
Get to Know Us
Connect with Us
Make Money with Us
Let Us Help You
© 1996-2021, Amazon.com, Inc. or its affiliates