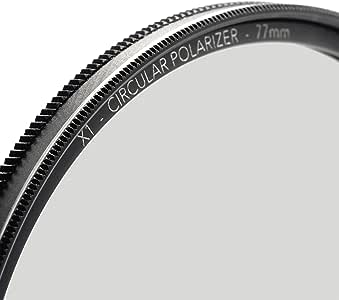 by Breakthrough Photography
4.1 out of 5 stars 181 ratings
International product from outside Singapore

cj
5.0 out of 5 starsPleasantly Surprised by the Quality
10 March 2018 - Published on Amazon.com
Size Name: 77mmVerified Purchase
I have been taking photos for 42 years. I just recently started investing into higher end gear. Always a Canon person. I recently purchased a Canon24-105mm f4 IS II USM L lens. The Lens is fantastic and frankly I was reluctant to put any kind of filter on it. However I was working with a Company taking photos of their awards to put onto their website. This was a spontaneous situation so I had no lighting gear with me. Using ambient light and it was near impossible to get rid of Glare from some of the Crystal Laser Etched Awards. I managed it but it was difficult. If I had a polarizer it would have been an easy fix. So I went on the hunt. Not wanting to invest over $100.00 on a filter I found this. Cheap I thought well I will only use it when I need it. Wrong. It is precision made and it fits on the lens so that it allows me to put my lens hood on and off without being in the way. Factory Lens Cap fits snugly and gives me just the right amount of polarization. I was pleasantly surprised by the quality of this piece. It only adds about 3 mm to over length. It will stay on my lens unless I notice any issue with clarity. So far I haven't. This works well for me....I am sure there are some filter snobs that will turn away from it but not me it works well and has a 25 yr warranty.
Read more
4 people found this helpful.

Charles L
1.0 out of 5 starsWorst filter I ever owned
28 August 2019 - Published on Amazon.com
Size Name: 77mmVerified Purchase
The first image is without a filter, the second and 3rd are two separate X1 CPLs from Breakthrough Technology.

I bought a pair of these and a pair of the X1 UV filters. The two CPL filters were completely unusable. I bought these filters before going a major photo vacation and did not test them before going. I have bought other Breakthrough Technology filters and they were good so I assumed these would be good as well. What a mistake, I have whole week of images that are unusable. Then I called customer service they said someone would get back to me, they did, 4 days later. The customer service rep was rude and condescending. He told me, What do you expect from a $30 filter? Well, I expect that I will get a filter that produces usable images. When I mentioned I had a full set of Lee filters he basically told me I was an idiot for buying such bad filters I could say more but, in the end, this was one of the worse customer service experiences I have ever had. I wish I had recorded the conversation.

One X1 UV was Okay the other one was marginal with noticeable image degradation. So, only 1 filter out if 4 was something I can use. Not a very good average.

My Amazon Basics CPL is much better and costs less. The surface is not very durable but the images are usable, unlike these filters.

There are other quality filter companies out there. O will never buy another product from these people.

A. Cabrera
5.0 out of 5 starsBreakthrough will never break the bank or your image quality.
20 November 2017 - Published on Amazon.com
Size Name: 77mmVerified Purchase
Photography, in general, is expensive and you tend to forget how important the little things are to protect your gear. Hence, a lens filter. I often sit in my chair and search through Amazon for days till I find the best deal, which I usually regret. But I have never regretted getting my first breakthrough UV filter. Then I started getting their circular polarizer and ND filters. I have never had to worry about them getting stuck or having a hard time putting them on or off.

It's a great buy. Every lens I own now has a set of a UV which stays on permeant and a CP which is always in the bag. I only wish I was a famous photographer because then my opinion on their product would have more weight.

I know that this is more of a general review. But honestly, I never had an issue with Breakthrough's filters or had to worry about my image quality. Which in my book is number one reason why this CP filter is excellent.
Read more
4 people found this helpful.

Pericombobulation53
5.0 out of 5 starsGreat filter
24 August 2016 - Published on Amazon.com
Size Name: 77mmVerified Purchase
Although I was a bit skeptical at first, the X1 really is quite a good polarizer. Why was I initially skeptical? Because my experience with polarizers has always been that you can easily see the polarization effect through the viewfinder; Look through the viewfinder while rotating the CPL and you can typically see the sky darken and glare disappear, then reappear again if you rotate the filter further. Makes sense, that's what it's supposed to do, right? And you can easily see it happening through the viewfinder.

Well, not on the X1 - at least not with my setup (Pentax K-S2 and Sigma 17-50 mm F.2.8 EX DC HSM). While looking through the viewfinder, rotating the filter does not really change what your eyeball sees much at all. I have no idea why. So I was prepared to send it back... until I took a few pictures with the X1 and examined them on the computer - they were perfect! The sky had been darkened to a nice shade of blue without looking artificial, haze was reduced, and overall contrast was great. Just what I was looking for. So why can't I see this effect through the viewfinder, like I can with my other polarizers? I dunno... maybe because the polarizers I have bought in the past have basically been cheapos. Or maybe because I've never put a polarizer on a lens this wide before (the Sigma has a whopping 77mm filter thread!). I really don't know. All I know is that the proof is in the pudding - my pictures look great, so I'm keeping it.

I did, however, have to come up with a way of knowing what angle the filter was rotated to, since I couldn't see any difference in the viewfinder. I figured out that when the writing on the edge of the filter is pointed either at the sky or at the ground, the filter is functioning - meaning it is blocking polarized light as it is supposed to do. When the lettering is pointed to the side, the filter does not block polarized light. Simple enough to remember, but watch out because you may forget to change it when switching between portrait and landscape oriented shots. Also, the ring may rotate on its own if you bump it, so pay attention. (That said, the rotating action is pretty well damped, so it is unlikely to rotate on its own - but still, pay attention anyway!)

This filter truly is about as low-profile as a CPL can get. I was a bit nervous about this, because other filters that claimed to be "low profile" still caused vignetting on my Sigma lens. But this one did not, which was a pleasant surprise! Even at 17mm, I did not notice any vignetting caused by this filter.

Also of great importance to me, I did not notice any loss of sharpness at all. Theoretically, every time light passes through a glass element, sharpness is reduced. But I think in this case, any slight reduction in sharpness was more than made up for by the polarizing effect (really, it should be called DE-polarizing) of the filter itself. I think light passing through the regular old air we breath scatters a bit, in a polarized orientation. De-polarizing this light, as this filter does, un-clutters the photons (so to speak), and makes images more sharp, not less.

Final note, this filter did manage to get stuck on the lens! I wrestled with it, but since we were on vacation, I didn't have a filter wrench or any other tool to remove it gently, so I left it on for the whole trip to France. Even indoor shots were taken with the X1. I simply rotated it so that the filter was not doing anything when I was indoors. No problems, and my pics all came out great. Then, as luck would have it, the filter loosened up all by itself on the last day of the trip! Go figure.
Read more
5 people found this helpful.
Go to Amazon.com to see all 171 reviews 3.9 out of 5 stars
Free & fast delivery, movies and more with Amazon Prime
Prime members enjoy free & fast delivery, exclusive access to movies, TV shows, games, and more.
> Get started
Back to top
Get to Know Us
Connect with Us
Make Money with Us
Let Us Help You
© 1996-2020, Amazon.com, Inc. or its affiliates