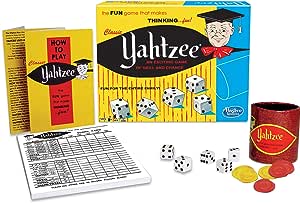 Classic Yahtzee, An Exciting Game Of Skill And Chance

Web exclusive! Update your game collection with winning moves classic Yahtzee. Join the millions of players who love this fabulously famous dice game. An exciting game of skill and chance, Yahtzee makes thinking fun. The game comes with an aluminum rimmed dice cup, score pads, 5 dice and bonus chips that help you keep track of how many times you yelled ‘ Yahtzee! "

An Excitied Game Of Skill And Chance

Yahtzee has been one of the most popular dice games in the United States since its introduction in the 1950s. Today, over 50 million games are sold each year. The game was invented by an anonymous Canadian couple, who called it 'The Yacht Game' because they played it on their yacht with their friends. The best 'hand' in a game of Yahtzee is a five of a kind. The game is played with five dice, and if you get five dice all with the same number, then you’ve scored a 'Yahtzee'. The name of the game is also the name of the best hand. The odds of rolling a Yahtzee on your first roll are 1295 to 1, so you won’t see that happen too often–at least not on a single roll.

The fabulously famous dice game, introduced over 50 years ago, continues to delight millions!

Julie Julie Julie
4.0 out of 5 starsGave as a gift, I've loved this game since I was a child
16 January 2019 - Published on Amazon.com
Verified Purchase
Although the box looks like the one of my childhood it is a different set, it comes with only one cup, one set of die and the cup does not have felt inside to mute the sound as the original ones did. This also did not come with 4 pencils as the original did. I think if you are going to try to market something as THE CLASSIC VERSION it requires more than a printed box.
Read more
14 people found this helpful.

Peterson
1.0 out of 5 starsPoorly executed retro version
27 January 2020 - Published on Amazon.com
Verified Purchase
False advertising. Th description makes one believe this is a retro version styles like the original. However, the description and picture are deceiving. The original dice cup from 60+ years ago was made of cardboard covered covered with a simulated leather on the outside and felt lined on the inside. The one that comes with this “Classic” version is a much smaller on that is basically a metal cup that is painted brown. It makes a terrible racket when you shake the dice in it. Oh, and these white dice that come with it are not period correct. The original game had red translucent dice with big white dots. This is a very disappointing and poorly executed
reboot of the original version. Did nobody bother to even research the original version Yahtzee before they went with this? I am returning it.
Read more
6 people found this helpful.

christina c
5.0 out of 5 starsGreat game!
19 July 2018 - Published on Amazon.com
Verified Purchase
It's Yahtzee, so what's not to like? We like to torture our teenage son by making him play games with us. After coming across this old standard in a bar one night, we knew it was the perfect choice. It's fun, quick, and awesome. Yes, I paid a little extra for the retro design but it comes with a cup and the other didn't. Plus, it looks cooler. I love this game. We take it camping as well. It's great for your math skills if you choose to add things up on paper. If you fear math, you can just use your phone's calculator.
Read more
11 people found this helpful.

SoozeSays
5.0 out of 5 starsStill a Classic!
18 February 2019 - Published on Amazon.com
Verified Purchase
I recently bought Yahtzee as a gift for my 8 year old granddaughter. We were going to be spending a few weeks together and I thought it would be fun to play with her. She loved it! There is a reason that this game is a classic. There was a little bit of a learning curve for her with some of the concepts (full house) and the strategy involved, but we played it almost every day. Even her little 4 year old sister would sit with us and roll the dice for me. One of my fondest memories from childhood is sitting around a table playing games, with this Yahtzee set, I can share that with the next generation. Everything you need to play is in the box, including dice, shaker cup and score pad. Recommend this highly.
Read more
3 people found this helpful.

BVAUNSSON
5.0 out of 5 starsWhat Can I Say, but FUN, FUN, FUN
18 February 2015 - Published on Amazon.com
Verified Purchase
Another classic. I love everything about this game. The one not-so-good thing is, there are not enough score sheets to last too long if you love to play at length to pass the time. The makers could throw in another pad of sheets and not lose any money. Replacements pads are very expensive. I put four sheets together in a square pattern, scanned and cut them into singles for practically pennies for the cost of paper and ink, but that does not detract from the fun factor this game brings. The upside: The high Fun Factor. The downside: The cost of score sheets.
Read more
16 people found this helpful.
Go to Amazon.com to see all 697 reviews 4.7 out of 5 stars
Free & fast delivery, movies and more with Amazon Prime
Prime members enjoy free & fast delivery, exclusive access to movies, TV shows, games, and more.
> Get started
Back to top
Get to Know Us
Connect with Us
Make Money with Us
Let Us Help You
© 1996-2020, Amazon.com, Inc. or its affiliates