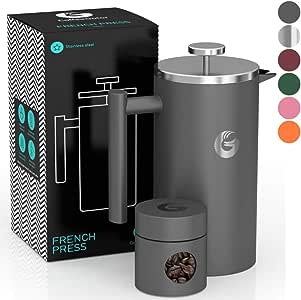 by Coffee Gator
4.7 out of 5 stars 2,440 ratings
Available from these sellers.

The easy route to incredible coffee in your own home with the Coffee Gator French press.

Don’t you just hate it when you invite friends round and you don’t have a matt-finished Coffee Gator French press with laser-cut logo to hand? Of course you do. So did we until we got our hands on this astonishingly attractive little number.

We’ve seen rapid improvements in our social lives, increased productivity and enormous leaps in our IQ scores. Ok, so maybe that isn’t strictly true, but we’re definitely happier and you can be too.

Not only is it tougher than anything else on the market, but it keeps your coffee sizzling for longer and filters out more of the dregs.

Tessa S.
5.0 out of 5 starsGo buy one.
27 November 2017 - Published on Amazon.com
Colour Name: GreySize Name: 34flozVerified Purchase
I previously owned an insulated french press that I purchased many years ago from Starbucks. (I wanna say that I bought it like...8 years ago). anyway, it was time to retire the thing. The handle had broken off, it leaked, the plastic part of the lid had cracked in a way that made it rather dangerous to use. But, I was stubborn, and didn't want to get rid of it. I mean, that coffee pot was my longest relationship, how could I give it up!? But, finally, it was time. So I went on the search for a comparable replacement that could handle my 2-3 pots-per-day usage and wouldn't break.

After some research and searching around town for something I liked, I stumbled across the Coffee Gator on Amazon. I'll admit, I immediately liked it because of the name. I mean, come on, Coffee Gator? It sounds cool.
So I read some reviews, and finally decided to buy one.

It arrived in the mail 2 days later and I opened it up, excited for my new kitchen toy. It was in a pretty box, packaged up all nice, and I immediately put it to work. And omg, it's amazing!!

The double filter really does make a difference. (I was a little dubious about this before trying it out), and my coffee is more of a drink, and less of a 'snack' now. I had gotten used to having some grounds in my coffee, and didn't mind it, but gosh, it's nice to just drink coffee without stuff in it.
It keeps the coffee about as hot as my old one did (in it's prime). So as far as that goes, I'd say it's about average compared to other insulated presses. (I also have a glass press that I use for tea, and that gets cold really quickly, so it's better than those for sure)

The thing I like best about it, is that there are no plastic pieces to break off. The spout and handle are firmly attached (Welded?) to the pot, so they shouldn't come off. And the lid/plunger are metal as well. But not the kind of metal that makes your hands stink. I bought the gunmetal grey one, and just as a purely aesthetic comment, it's not as dark as it is in the Amazon pictures. Just fyi. It's still grey...but not really that dark. Which is fine. Oh, and it's not as heavy as it looks. I was expecting it to be pretty weighty, but it's not. It's not gonna give you a workout at 6am when you roll out of bed.

So ya, bottom line, I couldn't be happier. I would absolutely purchase again if a tank ran over my current one and managed to break it. And I would absolutely recommend it to anyone that loves coffee. And they say it's expensive, but for any insulated press you're gonna get into pretty pricey territory, and this one certainly is worth it. 10/10 Thanks, Coffee Gator!!

oh, and the little container that comes with it, is adorable. I'll never use it for coffee, but damn, it's cute.

Jeffery P.
5.0 out of 5 starsStylish and Sturdy
24 January 2019 - Published on Amazon.com
Colour Name: GreySize Name: 34flozVerified Purchase
I bought this french press for my office, both for myself and for others to use throughout the day. Because of the heavy use I wanted something durable. This is exactly what I was looking for!

PROS
- Durable. The thing is thick and very well made. I could throw this against the wall and the only thing that would break is my wall.
- Style. Really good design.
- Keeps coffee hot for some time.
- Pours easy and doesn't spill.
- Stainless steel. While I normally prefer glass that wouldn't work for my office so stainless steel is the next best option.

CONS
- While the container is super easy to clean the top is not. The way the mesh folds up is hard to get clean underneath.
- The coffee container that comes with it is much smaller than I thought. It only holds enough grounds for 2 brews. I was hoping for something about twice the size.

Overall I am very happy with this purchase. If you want a stylish and sturdy french press this is the perfect option!

John W.
5.0 out of 5 starsMakes very good coffee. Have had a couple of weeks and ...
15 January 2018 - Published on Amazon.com
Colour Name: GreySize Name: 34flozVerified Purchase
Well built heavy duty construction. Makes very good coffee.
Have had a couple of weeks and it is very easy to use.
Add the coffee to the pot, boil and add water, attach cap (with plunger up), wait about 4 minutes and push the plunger down.
Enjoy good tasting, steaming hot coffee.
I have found that special grind coffee for French Press is not required for this maker. I use the same coffee I have been using with my other
maker and no grinds get past the screen.
Easy to clean. Highly recommended.
Follow up - One week after writing this review, the long plunger stem broke off of the strainer assembly.
I was contacted by Coffee Gator Customer Service and after I sent them a photo of the defective part, they sent me a complete brand new French Press at no charge.
You can't ask for more than that.
Looking forward, again, to that good French Press Coffee.
Rating: 5 Big Stars!
Read more
98 people found this helpful.

Katie
5.0 out of 5 starsCool design but cheap coating
25 June 2018 - Published on Amazon.com
Colour Name: GreySize Name: 34flozVerified Purchase
UPDATE- 6/27/18
After expressing my experience with this French press I was graciously greeted by the seller who offered me a free replacement for the trouble I had with the first one. I just received it today and it is awesome!! The material on this new one is stronger feeling and still has the mat look but definitely an updated material. I’ve already tried it out and it works great! Super happy with this French press and would definitely recommend this one to anything who likes smooth coffe from a good looking press

Old review-
Overall this fresh press works great. The functionality of it is perfect and does exactly what it’s suppose to do. My only issue is that after a few washes the Matt paint started peeling off and now you can see the metal and it just looks cheap and trashy. I bought it as a gift and read the great reviews but am disappointed that the outside scrapes off so easily. Still a very cool design and good functioning French press.
Read more
81 people found this helpful.

SethSlaymaker
5.0 out of 5 starsVery slick rig!!
2 May 2017 - Published on Amazon.com
Colour Name: GreySize Name: 34flozVerified Purchase
Coffee gator products are hands down the BEST for their price!! I have had their pourover for almost a year, the cold brew rig and now I added a French press to the mix. I love these products! This French press looks so badass! I love the steel metal and the dark gray finish...it's a very slick looking press. I love that it is super insulated and leeks the coffee hot inside it for a very long time. If you're looking for top notch coffee brewing devices, look no further! Coffee gator rules the game!
Read more
120 people found this helpful.
Go to Amazon.com to see all 2,071 reviews 4.6 out of 5 stars
Free & fast delivery, movies and more with Amazon Prime
Prime members enjoy free & fast delivery, exclusive access to movies, TV shows, games, and more.
> Get started
Back to top
Get to Know Us
Connect with Us
Make Money with Us
Let Us Help You
© 1996-2020, Amazon.com, Inc. or its affiliates