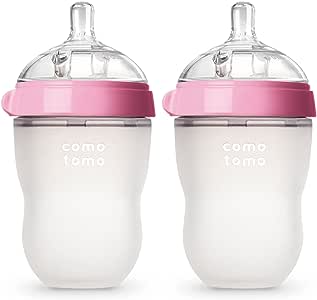 Slow Flow
Our truly slow flow nipples are great for newborns up to 3 months. It has just 1 hole to help develop your little one’s suckling and minimize choking and spit ups.

Medium Flow
Medium flow nipples have 2 holes, and are perfect for your growing little one (between 3-6 months)

Fast Flow
Our fast flow nipples feature 3 holes, and it’ll be sufficiently fast for your already big boy or girl.

Maximum temperature for bottle and nipple is 180 degree Celsius and 120 degree Celsius for cap and outer ring.
The world continues to change right before our eyes. But why is it that baby bottles are the same old unflattering tools? After all, isn't the baby bottle one of the first objects that your baby experiences through all five senses? Why should mothers have to worry about toxic plastic & colic-inducing design for something so basic & important? We found no good reason & decided to challenge the status quo. In our voyage, we've learned an important lesson. Inspiring products are born only when we think with a mother's heart & experience through a baby's eyes. We proudly introduce Comotomo Natural-Feel Baby BottleTM. Comotomo Baby Bottles feature innovative and sensible design to most closely mimic natural breastfeeding. Our naturally shaped, soft, silicone nipples are ideal for babies who have trouble transitioning from nursing to bottle-feeding. Your little one will love to hold onto the skin-like, soft and squeezable body that is like no other bottle in the world. And you will fall in love with our wide-neck design for brushless, stress-free, cleaning bliss! Our bottles are equipped with truly innovative vents that are smartly designed to prevent colic, while completely eliminating annoying leaks. They are quite possibly the most thoughtful bottles ever made. *8oz bottles come with medium flow nipples (2 holes) designed for 3 months to 6 months. Easy Feedings, Happy Baby: - Naturally shaped, squeezable, soft, skin-like silicone – Ideal for breast-fed babies - Innovative & non-leaking anti-colic vents - Unique interlocking feature and no-drip design Easy to Clean: - Wide-neck design for easy, brushless cleaning - Safe in: microwave, boiling water, dishwashers and sterilizers Safe Feeding: - 100% safe materials: BPA, PVC, Phthalate free

Our truly slow flow nipples are great for newborns up to 3 months. It has just 1 hole to help develop your little one’s suckling and minimize choking and spit ups.

Medium flow nipples have 2 holes, and are perfect for your growing little one (between 3-6 months).

Our fast flow nipples feature 3 holes, and it’ll be sufficiently fast for your already big boy or girl.

Hung
5.0 out of 5 stars Great price, great product
26 December 2019
Colour: PinkSize: 8ozVerified Purchase
The bottles are great. We switch from Pigeon to Comotomo because of the design and did not regret it. These bottles are too cute. Our child did take some time to adjust to the new nipples but all good now.
Read more
Helpful
Comment Report abuse
See all 1 customer reviews
Write a customer review

Caitlin
1.0 out of 5 stars Leaks!!!
11 December 2017 - Published on Amazon.com
Colour: GreenSize: 8ozVerified Purchase
I absolutely love these bottles I just got another set of two! But the holes on the side leak! I gave my baby his bottle and he had milk all over from the bottle leaking!
Read more
645 people found this helpful

Frederick
5.0 out of 5 stars Fantastic bottle, with one small heads-up...
12 July 2017 - Published on Amazon.com
Colour: GreenSize: 5ozVerified Purchase
After trying several different brands and types of baby bottles, this one is the winner by a long shot. In summary, they have the magic combination of being both vented AND easy to clean. Let me explain...

Due to some challenges with nursing we have been feeding our little one exclusively from bottles (with pumped breast milk), so we have had plenty of opportunity to try different bottles! The first bottles we used were non-venting, which turned out to be a big mistake. By the time our little one was a few weeks old she had developed such a strong suck that she would create a vacuum inside inside the bottle as she drank, which would cause the nipple slowly to collapse. Several times each feeding we would have to pull the nipple gently to one side of her mouth to break the seal and allow the nipple to re-expand. Obviously these mid-feed interruptions did not make her happy!

Next we tried a well-known brand of vented bottles which vent via a thin tube that extends all the way down through the center of the bottle. Although these bottles solved the suction problem, each one had four separate pieces, two of which contained tiny internal tubes. Cleaning all these small parts was cumbersome to say the least, and the thought of doing it multiple times per day filled me with a sense of despair I just couldn’t shake. There had to be a vented bottle that wasn’t so difficult to clean!

Enter the Comotomo bottle (accompanied by rays of sunshine and a renewed sense of hope). This was the answer! What makes this bottle so great?

1. The bottle is vented very simply, via two tiny “valves” on the sides of the nipple, so the whole bottle has just THREE pieces: the bottle itself, a nipple, and a plastic ring which secures the nipple to the bottle. No small parts to get lost!

2. The wide-mouth design and lack of tiny tubes make these VERY easy to clean.

3. The lightly textured silicone body has a non-slip quality which makes the bottle easy to grip.

4. They don’t leak (at least, WE have never had a problem with them leaking)

5. They have a cool, modern design (this is subjective and a matter of opinion, but still…).

I can really only find one “negative” to these bottles, and it’s really not so much a fault but rather a characteristic due to their shape. As the bottle’s contents are being consumed, if the bottle is held at a 45-degree angle or so, the last bit of liquid will pool at the top-side of the bottle instead of flowing into the nipple (see my photo). This isn’t a big deal, as all you have to do is tilt the bottle more upright briefly and the liquid will move into the nipple, but it is something to watch as the bottle gets close to empty.

Oh, and it’s not obvious from the product photos, but these bottles DO have volume markings on them. They are inconspicuous but still easy to read.

We are VERY happy with these bottles.

Melissa
5.0 out of 5 stars Game Changer.
10 February 2017 - Published on Amazon.com
Colour: PinkSize: 5ozVerified Purchase
Comotomo bottles are a game changer. I have to formula feed my baby and was on a quest to find the best bottle. You name it, I've tried it. My daughter has always been gassy. So naturally, I started with Dr. Brown's standard bottles. They are good bottles, and they did somewhat help her gas. But she was still occasionally having issues and Dr. Brown's bottles are a real pain to clean. After a lot of trial and error, and research, I decided to go with Comotomo. I wish I had made the switch earlier. I love these bottles!
My baby's issue with gas is now almost nonexistent. Yes, they may be a little higher priced compared to other brands, but they are worth every penny. I've been using these bottles for 6 months, and I love them more everyday.

PROS:
.Bottle mimics the milk let-down during breastfeeding. If you squeeze/massage bottle milk will gently flow out of nipple.
.Made of 100% Food Grade Silicone. Much safer than plastic bottles. Colored rim is plastic, but does not touch milk.
.Bottles have not turned yellow from warming/sterilizing.
.Dual air vents on nipple work wonders for gassy babies.
.Slow Flow nipples do not drip milk when turned upside down.
.Modern & attractive bottle. Best looking out there.
.Soft silicone and round shape make it easier for baby to learn to hold bottle.
.No leaks whatsoever. Just make sure that you screw the nipple ring on tightly.
.VERY easy to clean. Such a plus!
.Dries faster than standard plastic bottles.
.Nipples do not collapse as baby drinks.
.Easy for baby to latch onto. Wide nipple prevents "bottle-mouth".
.Smells do not seep into silicone. Old milk can be a nightmare in plastic bottles.
.Durable.
.Both 5oz and 8oz bottles fit into The First Years Bottle Warmer.
.Great price point.

CONS (a few things to be aware of):
.These bottles take longer to warm milk in bottle warmers. Almost twice as long in our First Years warmer (about 8 minutes/5oz).
.Tight fit in diaper bag pockets designed for standard bottles. They will fit, it's just tight.
.Medium Flow nipples drip milk (from the milk holes) if turned upside down.

If you're debating these bottles, don't! Just try them out. They are the best on the market. No other bottle compares. The nipple on Comotomo's bottle is amazing and really sets this bottle apart from the others. I've attached photos comparing the nipple to Tommee Tippee wide mouth nipples. As you can see, Comotomo truly has a wide mouth nipple. Just like the breast.
Read more

Dawn
3.0 out of 5 stars Loose lids and leakage
6 February 2018 - Published on Amazon.com
Colour: PinkSize: 8ozVerified Purchase
At first we absolutely loved these bottles. They are wide, easy to clean, squishy and perfect for breast feeding.
After a little while though, we started to have problems with them leaking. no matter what we tried, they continued to leak and a few times the lid came off completely wasting precious milk.
We constantly had to keep tightening the lid while feeding as the thread wasn't tight enough and this got frustrating.
Eventually, we had to ditch them, which was a shame since they cost so much. We switched to Avent Classic bottles and never looked back.

I wish they would have worked for us.
Read more
137 people found this helpful
Go to Amazon.com to see all 5,968 reviews 4.4 out of 5 stars
Free & fast delivery, movies and more with Amazon Prime
Prime members enjoy free & fast delivery, exclusive access to movies, TV shows, games, and more.
> Get started
Back to top
Get to Know Us
Connect with Us
Make Money with Us
Let Us Help You
© 1996-2020, Amazon.com, Inc. or its affiliates