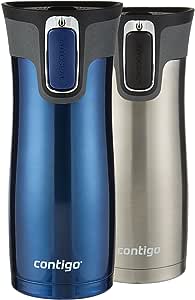 by Contigo
4.7 out of 5 stars 5,859 ratings
International product from outside Singapore

Colour Name: Monaco & Stainless Steel
Technical Details
Additional Information
Feedback
Would you like to tell us about a lower price?

Hectic mornings are easier with the 16 oz. West Loop Stainless Travel Mug with Easy-Clean Lid, because this mug features a one-touch AUTOSEAL lid that automatically seals between sips to prevent spills. This double-wall vacuum-insulated mug is engineered to keep drinks hot for up to 4 hours or cold for up to 12 hours, without a sweat. We mean that literally, because this vacuum-insulated mug keeps your drink at the optimal sipping temperature and eliminates condensation for dry hands. The AUTOSEAL lid creates an easy one-hand drinking experience and it fits most standard car cup holders, which makes it ideal for the commute! We passionately urge parents, teachers, commuters or anyone on-the-go that loves a hot drink, to grab this mug!.

Modern life moves at a fast pace and reliability is a must whether you’re traveling on a plane, car, bus, or train, working at a desk, standing on your feet for a 12-hour shift, or burning calories on a treadmill. Meet the Contigo Autoseal West Loop Vacuum-Insulated Stainless Steel Travel Mug with Easy-Clean Lid, which combines intelligent design and innovative technologies to adapt to any commute, agenda, or lifestyle. Available in 16 ounces, 20 ounces, or 24 ounces, this leak- and spill-proof mug keeps liquids piping hot or icy cold for hours, can be used with just one hand, fits comfortably in most cup holders, and cleans up easily.

Kindle Customer
1.0 out of 5 starsContigo lifetime guarantee is a joke!
29 January 2019 - Published on Amazon.com
Colour Name: Monaco & Stainless SteelVerified Purchase
Purchased this set of cups. One of the lids had an obvious manufacturer defect, as it broke off at the rim right where the "push to clean" button is. This caused the lid to leak, which is a potential burn hazard if the cup contained a hot beverage. I reported it to Contigo not once but twice, with photos attached, because there is a LIFETIME GUARANTEE. Contigo never bothered to respond to either message. My advice: don't purchase their products. The lifetime guarantee means nothing.
Read more
90 people found this helpful.

Siobhan
1.0 out of 5 starsQuality has plummeted...
14 February 2018 - Published on Amazon.com
Colour Name: Very Berry & Stainless SteelVerified Purchase
I have had my larger contigo thermos for 4 years and purchased this set for my husband at Christmas. BOTH have broken already. The spring mechanism is weak and we are so incredibly disappointed. I've raved for years and will be contacting the manufacturer. Today, the lid wouldn't seal and I ended up covered in hot coffee while out at a museum with my twin toddlers. Everything in thr diaper bag reeks and some items were ruined. Nightmare!
Read more
84 people found this helpful.

Tom Daniel
2.0 out of 5 starsGreat vacuum insulation, Inadequate cover seal!
15 August 2015 - Published on Amazon.com
Verified Purchase
This was my 2nd generation purchase of a pair of Contigo Mugs from Amazon. The first purchase was based on my satisfaction with a Contigo mug that I won as a door prize at a charity event, and in Jan 2014 I bought the two mugs to replace that one (when I left it in a classroom where I made a presentation - the teacher laughed when I asked if the kids, who know quality when they see it, had by chance returned it to her) - one for my wife and one for me. We used them regularly, and they traveled widely with us, for more than 18 months, but we eventually lost both - at different times.
So, in June, I went back to Amazon to replace them. I'm not sure why, but I couldn't find the same pair I'd bought earlier (they seem to be on the site now), so I ended up ordering this pair. They were ~$38, compared to the ~$30 I remembered from the earlier purchase, but I figured that was just inflation.(?) Anyway, these came a couple of months ago, and I was surprised that they were quite different from the earlier ones. The top has a different mechanism, which pops apart for cleaning (not sure, but it seems like an unnecessary improvement, since the previous design worked fine for us) and the overall construction is much lighter weight (thinner walled?). I was surprised to find that I could fill this apparently thin-walled container with hot coffee and never feel any warmth coming through to the outside! It obviously has a very thin, but very efficient, vacuum chamber between the inside and outside - impressive engineering!

Until yesterday, when the mug I was carrying in a tote with a bunch of papers LEAKED all over the papers. I checked to make sure that the cover was screwed on tight (it was) and that the button hadn't somehow gotten pressed, but found that the mug still leaked a steady drip when inverted. I was dismayed to find that the other one also leaked when sealed as tightly as possible and held upside down. Though I'd been impressed with the lack of drips from the earlier model, I'm very discouraged with the failure of this new design. It appears that the seal in the new cover design is based on a flimsy flexible plastic gasket that doesn't actually seal very well. (See attached photo)

I was surprised while shopping at our local Costco this evening, to see a pair of Contigo mugs very similar to the earlier design discussed above - for only $19.99! I bought them and decided to return the other ones to Amazon - especially because of the price difference. The new ones have a different cover seal design, sort of between the original simple design and the flimsy gasket of the new one from Amazon. I haven't tested them yet, but they look less likely to fail than the more complex ones that did fail.

I was disheartened to find that Amazon won't accept return of items like this more than 30 days after delivery, so I'm stuck with them. I apologize for the length of this review, but it's the best way I can see to protest Amazon's product selection, pricing and return policies.
Read more
286 people found this helpful.

MVJ
1.0 out of 5 starsArrived used and dirty
23 January 2017 - Published on Amazon.com
Colour Name: Monaco & Stainless SteelVerified Purchase
This review is about the condition in which the two mugs arrived...not about the utility of the mugs themselves.

When I took the Cantigo box out of the Amazon box in which it arrived, I noticed it was pretty banged up...but that's not too big of a deal. What IS a big deal is this: when I opened the box and took out the mugs and opened the tops to clean them (the instructions state to clean all the pieces before the first use) they were used, dirty and wet inside. Additionally, the tops don't match and one of the tops clearly has tea or coffee stains in the notch where the liquid comes out. Gross!! Check out the pictures; this is exactly what they looked like right after taking them out of the box. I am definitely returning them.
Read more
189 people found this helpful.

Kristin Davison
5.0 out of 5 starsContigo makes great products
17 May 2016 - Published on Amazon.com
Colour Name: Monaco & Stainless SteelVerified Purchase
My husband and I have bought 5 of these. They last FOREVER but we wanted new ones because of the new top part. The new product (this one) has the mouth part that pops out for easy cleaning. This keeps my coffee warm for HOURS, doesn't leak, and I love the new lock so it can't spill if I put it in my bag.

Pros:
- leakproof
- keeps coffee hot (sometimes I have to leave the top off to let me coffee cool otherwise it takes too long)
- fits nicely in my hand
- easy to drink from
- fits in car cup holder

Cons:
- color on the mug does eventually chip off in the dishwasher even if on the top rack (but only after about 4+ years of daily use)
- spurts a little bit each time the first sip because of the built up pressure after you put the top on (not a big deal, after I screw on the top I just push the button once to let the air out before I take a sip)
Read more
62 people found this helpful.
Go to Amazon.com to see all 3,508 reviews 4.6 out of 5 stars
Free & fast delivery, movies and more with Amazon Prime
Prime members enjoy free & fast delivery, exclusive access to movies, TV shows, games, and more.
> Get started
Back to top
Get to Know Us
Connect with Us
Make Money with Us
Let Us Help You
© 1996-2020, Amazon.com, Inc. or its affiliates