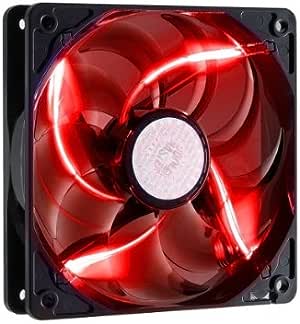 Size Name: 120mm - Red | Style Name: SickleFlow 120 Red
Technical Details
Additional Information
Feedback
Would you like to tell us about a lower price?
If you are a seller for this product, would you like to suggest updates through seller support?

Wei M.
4.0 out of 5 starsGood fan, but super hard to screw on!
11 August 2018 - Published on Amazon.com
Size Name: 120mm - RedStyle Name: SickleFlow 120 RedVerified Purchase
The fan works well, it glows but will not be super bright which I am ok with.
I did however have to spent a solid 20minutes screwing on the fan. The holes did not have the screw marks, you had to use your screw and etch in the pattern in order to start screwing. I first screwed in the hole and after it had been etched, I removed the screw and then proceeded to mount it onto the tower.

1 other thing to note was that the 4 pin connects weren't aligned correctly. In fact they were a little crocked so I had to shift them in order to connect it.

By the end I was able to get it running and for the price I am very happy with what I got.

FW911
4.0 out of 5 starsWorks great. Mounting can be a pain, though.
28 November 2017 - Published on Amazon.com
Size Name: 120mm - RedStyle Name: SickleFlow 120 RedVerified Purchase
A lot more air flow than the stock fan that came with my case. Also like the spiral lights in it.
Only quirk is on and of for about 8 months of owning 2 of these for 4 years the one's bearing seemed to get loose I guess? It would rattle during startup then sort itself out. Hasn't happened since I rebuilt the PC in May this year though.

As for cons, mounting them was a pain. The holes don't come pre-grooved. So how do the fans mount then? Simple; you line the fan up with the fan vent, line up your screw, and twist it into the plastic hole carving it out. Not sure if all fans are like this, but I really needed to torque the screwdriver for 4/8 screws (two problem children on each fan).
Read more
2 people found this helpful.

Patrick N
4.0 out of 5 starsGood value
3 May 2015 - Published on Amazon.com
Size Name: 120mm - RedStyle Name: SickleFlow 120 RedVerified Purchase
I grabbed a pair of these to replace and supplement the stock fan on the front of my machine. They have improved air flow considerably: when I stick my hand inside (not a great idea, I know, but I wanted to check), I could easily feel the breeze flowing over my hard drives.

I would have happily awarded this five stars except that when I went back to buy another set, they had removed shipping to my country. Why?

EDIT: Originally my only problem was that shipping to my country was removed. Happily they brought it back and I was able to order another pair for a new rig I'm building. This time, however, the cables were loosely seated on one of the fans: a couple were raised enough that the blades were hitting them. I don't generally mind noise levels, but two light slaps a couple of thousand times per minute is pretty annoying and potentially damaging. I used some duct tape to strap them in, but I shouldn't have had to do that. It also kind of threw off the color scheme, but that's mainly my fault for using duct tape instead of electrical tape.
Read more

Warren M
5.0 out of 5 starsNot silent, but moves air.
28 July 2013 - Published on Amazon.com
Size Name: 120mm - RedStyle Name: SickleFlow 120 RedVerified Purchase
This fan isn't nearly as quiet as it's advertised as being, so don't fall for their claim of 20db. I did my research before I ordered it, however, so I knew what to expect. It is, however, relatively quiet for the amount of air that it moves. It's certainly quieter than my old Antec Tricool exhaust fan, and it seems to move just as much air.

It's also a good-looking fan. The red LEDs match relatively well with the CoolerMaster Megaflow 200mm fan I also use for exhaust.

Overall, I'm pretty happy with this fan. Not as quiet as advertised, but still a tremendous value for $8. You can generally adjust the fan speed in the BIOS, so you can make it as loud or as quiet as you want. The air flow trade off doesn't seem to be as steep as it was with the Tricool, either.

EDIT 9/24/2015: I'm still actively using the two of these fans I picked up when my original review was written, and they're still excellent fans. In fact, I've since decided to replace all the Corsair "Quiet Edition" (read: "Low RPM Edition") fans that came with my case with these, so that I've got the flexibility to move a lot of air when I want to. I use an NZXT fan controller anyway, so I can tone them down when I'm not stress testing. If you're thinking about spending more money on some "premium" fans, don't bother. These are great, and while they're noisy at full blast, you'll rarely need them to spin up that high because their air flow is so good.
Read more

My other complaint may not be entirely valid. The old fan was a 3 pin as well and noticeably sped up and slowed down with some control from the motherboard, presumably based on case temperature. This one is full speed all the time. Perhaps there was some specific feature I should have looked for in a fan indicating that it accepts this control. Don't know. But this isn't it.
Read more
Go to Amazon.com to see all 666 reviews 4.1 out of 5 stars
Free & fast delivery, movies and more with Amazon Prime
Prime members enjoy free & fast delivery, exclusive access to movies, TV shows, games, and more.
> Get started
Back to top
Get to Know Us
Connect with Us
Make Money with Us
Let Us Help You
© 1996-2020, Amazon.com, Inc. or its affiliates