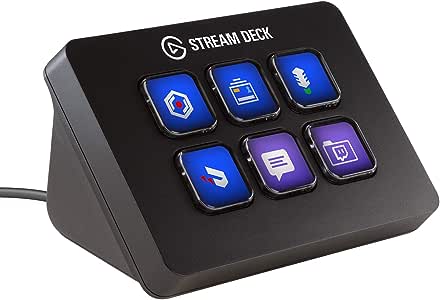 Style Name: 6 Keys
Technical Details
Additional Information
Feedback
Would you like to tell us about a lower price?
If you are a seller for this product, would you like to suggest updates through seller support?

Take control of your live video stream with the Stream Deck Mini from Elgato. Ideal for live streamers and content creators, the Stream Deck Mini features a wired USB connection and six LCD keys that can be programmed to trigger a wide variety of actions, including launching media, switching scenes, adjusting audio, and performing in-game actions.

Jake
5.0 out of 5 starsOutstanding for streaming & productivity.
21 September 2017 - Published on Amazon.com
Style Name: 15 KeysVerified Purchase
I have to say that I love this thing. I read a majority of the reviews here on Amazon before I placed my order, and I can say that 95% of the complaints in other reviews are unwarranted.

Complaints others have had:
- Short/Fixed USB Cable :: I don't understand this one. Every single wired keyboard and mouse I've ever owned had a fixed cable of the same length. If it doesn't work for you, neither do your mouse and keyboard.
- LCD "ripples" when you press buttons :: Try not pressing buttons like a 200lb gorilla. Mine doesn't ripple unless I really try to make it do so.
- There's no built-in functions for MYSOFTWARE :: ... This one annoys me greatly. It's built for streaming software. It literally has STREAM in the name. That said, you can set up custom key binds with custom images for the keys all you want. They work great. I have mine doing a dozen functions that technically aren't supported for OBS, Photoshop, and several other programs.
- It feels cheap/cheaply made :: What planet these people live on is beyond me... This thing is amazingly well built.
- There's a long delay when I press buttons! :: Try not streaming on a potato. Mine works beautifully. Any delay is on the users end. (too much BS running in the background/slow computer)
- It's overpriced! :: If you think this is overpriced, you haven't looked at similar products. Programmable keypads with similar functions (with NO LCD) are just as/more expensive.
- There's only one LCD, it's not individual displays for each key! :: Who cares? It functions and looks great in the process.

My Complaints:
- Fairly minimal native OBS options. This is easily overcome with custom key binds, it would have just been nice to have things like mute mic built-in.
- Always on display. It really needs to pick up on when the PC display shuts off due to inactivity and do the same. (or shut off when the computer is locked, either way)

The TLDR: It's great. It works beautifully for streaming, and just as well as a general productivity helper. I don't regret ordering mine and I doubt anybody else will either.

Amithus
5.0 out of 5 starsWorks in-game for custom key-binds as well as on desktop. LOVE IT
5 July 2017 - Published on Amazon.com
Style Name: 15 KeysVerified Purchase
I have been using the Stream Deck for five days. I must say this is exactly what I’ve been looking for. I’m NOT a streamer, but I’m an IT pro as well as a gamer. I’m always looking at cool new ways to interact with my computer over icons on a desktop or mouse / keyboard. The games I play have a lot of key binds and I do a lot of listening to audio while playing which being able to control these things without having to minimize your game is wonderful.

I’ll start off by saying I’m running Windows 10 and it’s working great. For those comments that say you can’t get the Stream Deck to run key combos while you’re in game, you need to run the Stream Deck engine as admin, only because your video game or other app is running as such. Any game / app that isn’t running as Admin can be easily used without setting this.

Installation is simple and easy to understand. The USB cable is fixed to the device, which does kind of suck, but I’ve been able to run it with a USB extension cable and it’s working fine.

I’ve found it a sinch to get custom key icons, I just go to Google and type in whatever I’m looking for such as “Razer Logo” and download the one that looks like what I want and set it to the key which makes it much easier to learn as you can identify the keys much faster.

The device is snappy and has zero lag when pushing buttons. You can make “folders” which is a button that gives you a whole new set of buttons, think of it as a folder on your smart phone when you have a group of apps. This is a super nice feature and I didn’t even expect that it would do this, but it does. I know some people say that they are bummed that it will only allow folders on the top level, but this is probably needed as making a folder structure that is 3 or 4 + layers deep would either slow down the device or just make it stop working all together.

I find the size of the device to be about perfect. The buttons are not so small that you have to overly divert your concentration to hit them and they aren’t so big that it’s obnoxious. They really did make this easy to use. You can also brighten or dim the buttons depending on your environment. I find this nice as when I’m gaming at night it’s not beaming into my eyeballs.

I do wish there was more functionality for things not related to streaming and such. I would like to see more multi press or even macro support like a proper mouse or keyboard driver does. I would also like to see a way to make multiple profiles, say one for work and one for gaming, this would give the device a lot more functionality. I’m going to be writing the company after this and letting them know these requests as I really do think this sort of device is the future for input. People are looking for more ways to simplify their computer use or to add that functionality that they want and this is that device. The fact that the keys are OLED screens so they are illuminated custom icons really makes this device sing. If it were like it’s competitors where you have to make tiny paper cutouts and then back light the paper, it just wouldn’t do.

I would recommend this device to anyone looking for custom key inputs for their computers, games or simulators. This will be installed in my iRacing sim as a replacement button box and I’ve already told about 10 people about this and they are all buying one. Even with the fact that it’s the first version with only key press assignments or launching apps / websites, it’s still enough to get started and I look forward to what they might do in the future. I will update this review if anything changes.
Read more
267 people found this helpful.

Ron G
5.0 out of 5 starsfavorite websites etc
17 June 2017 - Published on Amazon.com
Style Name: 15 KeysVerified Purchase
Absolutely worth every penny and more. The Elgato Stream Deck is something you would expect 20-years from now. In my opinion, everyone can benefit from one of these. You can access anything from your pc I.e.: Netflix, social media, multimedia, photoshop, favorite websites etc. I keep trying different configurations and it handles anything I come up with. It is easy to setup and configure. The keys are slightly larger than your keyboard keys. They are highly customizable. You can ad domain icons, photos and even create your own through the Elgato software and photoshop. They have a mechanical feel when activated without the noise. For those who travel, you can easily take the Stream Deck with you. I can see someone who travels to do a presentation or lecture never leaving home without it. A person in Sales, Marketing, Stockbrokers etc could use the Stream Deck as a tool. I am going off track a bit but I wanted to let people know that you can do a lot more with it than Streaming and recording game play. Feel free to visit my Twitch channel for a demonstration at rlgehlen. I am usually on in the evening but could login for a brief rever. Just respond to the review. You are really going to enjoy the Stream Deck.
Read more
158 people found this helpful.
Go to Amazon.com to see all 1,026 reviews 4.6 out of 5 stars
Free & fast delivery, movies and more with Amazon Prime
Prime members enjoy free & fast delivery, exclusive access to movies, TV shows, games, and more.
> Get started
Back to top
Get to Know Us
Connect with Us
Make Money with Us
Let Us Help You
© 1996-2020, Amazon.com, Inc. or its affiliates