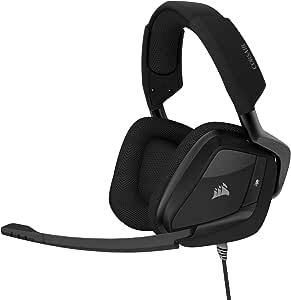 by CORSAIR
4.1 out of 5 stars 818 ratings
International product from outside Singapore

Immerse yourself in the action with the Corsair void RGB Elite wireless, with custom-tuned 50mm neodymium audio drivers delivering 7.1 surround sound on PC. Microfiber mesh fabric and memory foam earpads provide lasting comfort. Connect to your PC or PS4 with a low-latency 2.4GHz wireless connection, with a range of up to 40ft and all-day battery life up to 16 hours. An omnidirectional microphone with LED mute indicator ensures that you’re heard with exceptional vocal clarity. The void RGB Elite’s distinctive design and durable construction are complemented by fully customizable RGB lighting on each ear cup. Powerful Corsair iCUE software ties everything together, enabling full control over equalizer settings, 7.1 surround sound, RGB lighting and more. Tech Support # 1-888-222-4346 Opt #1

Peter Yuan
1.0 out of 5 starsMalfunctioned within 2 days
2 September 2018 - Published on Amazon.com
Verified Purchase
This is a review for the wired version. The headset itself is very conformable. The width is good. The mic is decent. The 7.1 Dolby surround sound is a game changer here.
After you download the Corsair utilities online, TURN ON the surround sound option! It's worth it!
If you are a prime member, please go to the movie called "Shutter Island" starring Leonardo DiCaprio, and skip to 4:18 mark. At that time mark, there is a deep orchestrated sound track that lasts for a while. There is where you can test the difference between stereo and Dolby surround sound. You will know the difference!
5/5 for me.
Update: on the second day, the microphone stopped working. Friends on team speak could not here me.

Craig
5.0 out of 5 starsJust Stop Looking For Other Headsets and Buy This One.
18 February 2018 - Published on Amazon.com
Verified Purchase
I've been through 5 mics trying to find a headset worth owning. I had a lot of cheap ones that had issues and even tried the Astro A10 before this.
I literally couldn't be happier with this headset. The design is amazing, it fits your head really well and doesn't have even the slightest bit of pressure.
I spent a weekend playing with this on for like 5-8 hours.. Lol shut up it's winter..
Pros:
-HD Mic sounds clear to everyone
-Really great sound, nice booms and volume
-Fits perfect on your head, cups your ears and has literally no pressure points
-High quality cable, no issues connecting to my xbox controller. Some headsets get static when it moves a bit or something
-Mute button on left ear, easy click on and off

Cons:
Only real small con is the mic distance. I would like it to go down a bit more to avoid breathing in the mic sounds. this is not a huge deal so no reason to mark down a star for that.

Overall, with its perfect mic/speakers combined with the comfortably this headset stands out way above the rest that I've tried.
Read more
54 people found this helpful.

Hanna Kessler
5.0 out of 5 starsGood build and sound, comfort overrated
3 July 2018 - Published on Amazon.com
Verified Purchase
I like this headset a lot. I bought it for use with my pc/ps4/iphone and it works for all 3 very well.

The headset itself uses a single 3.5mm jack for power and audio in/out, so I purchased a 3.5mm in/out splitter to use with my desktop, but it turns out I didn't need it because the headset itself comes with a usb to 3.5mm adapter that allows for true dolby surround sound. This means that true surround sound is unfortunately only possible with pc, not ps4 or xbox. Instead they get stereo sound.

The build itself feels high quality and sturdy, even the parts that are plastic. However, it is very loose. This isn't just because my head is small, the headset does not provide much clamping force to hold it on the head and it slides easily. Additionally, the headband adjusts too easily for my preference so that it will loosen when in use occasionally. The boom mic is a kind of stiff rubber material, so it is "flexible" but not really very easy to pose as it just reverts back to being straight. Also, mine has a slight kink which is visually somewhat annoying but does not affect function.

The "memory foam" headrest is extremely soft foam, much softer than I was expecting. It does not provide much in the way of support but does ensure that your head isn't touching pure plastic. Similarly, the ear cuffs themselves do not feel as high quality as I had expected. They are not particuarly squishy, and when pressure is applied to them they make an audible click sound that sounds like something in the speaker is bearing the force.

As far as performance, I was very impressed. I am no audio expert, but I felt that the sound was good. I can clearly hear both game sounds and chat, and my friends can hear me easily over the mic. When playing music, the headset does well to overcome and reduce ambient noise. I was able to listen to music while mowing my lawn without blowing my ears out.

The cord is long enough to comfortably play at a pc, but not so long as to be rediculous when using with a phone or tablet. On both ends it is supported with a soft plastic structure to help avoid damage in these areas. I also appreciate having volume controls and mic mute on the headset itself instead of the cord so I don't have to fish for the dongle on feet of cord when I want to turn the volume up or down. Also, the volume scroll wheel is difficult to accidentally hit and change the volume, something my ears are thankful for. The mic mute is a toggle, with no clear indicator that can be a problem but I usually just leave it on all the time anyway.

Overall, this headset is great for multipurpose use or dedicated to pc. It is high quality and was designed to last with a lot of quality of life perks that other headphones have been lacking. Comfort is nothing to write home about, but it is fine for average use and I had no discomfort after 1hour+ gaming sessions. Purchased late may 2018, will update when they break but so far going strong.
Read more
25 people found this helpful.

Me
3.0 out of 5 starsNot for small women
3 May 2019 - Published on Amazon.com
Verified Purchase
Best headset I have ever bought. Crisp quality, excellent mic. My one and only issue is that these do not stay on my head. I am only assuming they were not designed to fit a regular sized woman (which I am), and any time I move they shift and slide forcing me to keep my head in a very specific location and angle. It is beyond uncomfortable. I literally cannot look down or else they fall off my head like it was covered in butter. The ear room is also huge and leaves the backs of my ears always hitting the edges of the headphones (due to the sliding). If i shake my head even slightly, they slip off. I have gotten cricks in my neck trying to keep this thing on my head. I hate that they are so uncomfortable because they truly do have the best quality mic and sound ever. If you are a big man with a big head, then these are for you. However if you don’t have a big head like me, don’t buy these.
Read more
13 people found this helpful.

Lee D
5.0 out of 5 starsVoid pro rgb USB version
12 August 2018 - Published on Amazon.com
Verified Purchase
I've had this headset for two days now. So I cant speak on its durability. So, it is adjustable, and as someone with big ears, this headset is super comfortable. No pain on my ears at all. Sound quality wise, I'm no audiophile but I have thoroughly enjoyed the sound quality, and it had picked up the very minor sounds in games and in movies. I've watched a movie using this on PC and ps4 and the quality of sound is great. As far as functionality, it was plug and play and worked on PC but I'd download the corsair software for firmware updates. Also let's you adjust the lighting but I personally dont care about that. On ps4 it is plug and play, but be advised the volume rocker works unless you adjust the headset volume in the device settings using the controller. Unplugging and plugging it back in restored the volume rocker functionality. A minor inconvenience. DOES NOT WORK ON XBOX ONE VIA USB. Not sure if adapters would make it work but via USB it does not work on xbox one. Have not tested on my Nintendo switch yet.
Read more
9 people found this helpful.
Go to Amazon.com to see all 589 reviews 3.8 out of 5 stars
Free & fast delivery, movies and more with Amazon Prime
Prime members enjoy free & fast delivery, exclusive access to movies, TV shows, games, and more.
> Get started
Back to top
Get to Know Us
Connect with Us
Make Money with Us
Let Us Help You
© 1996-2020, Amazon.com, Inc. or its affiliates