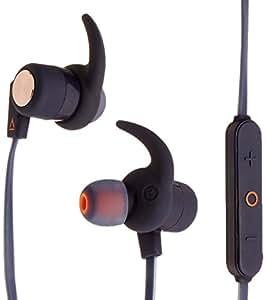 by Creative
5.0 out of 5 stars 1 rating
International product from outside Singapore
6 new from S$56.39

Colour: Blue
Technical Details
Additional Information
Feedback
Would you like to tell us about a lower price?
If you are a seller for this product, would you like to suggest updates through seller support?

Denise
5.0 out of 5 stars Money’s worth
29 December 2019
Colour: BlueVerified Purchase
Good battery life. Sound quality is good.
Fits the ear well and does not fall out during my run.

Ed P
5.0 out of 5 stars100% Human Review
1 August 2018 - Published on Amazon.com
Colour: BlueVerified Purchase
Before anything, I'd like to point out I do not plan on using this for exercising. I would mainly use this for work.

My workplace consists of impact guns, hammering steel frames, and such -- a lot of loud noises that would end up damaging my hearing in the long run. With that in mind, I decided to start looking for earphones that can block out at least some noise. I was using a wired pair of earphones that my Sony Xperia XZ1 Compact came along with. Those pairs were doing the job well; however, for it being wired it would occasionally get caught on random things and after a while, it started to fall apart -- constant twisting of the wires eventually ripped them. So I started browsing for bluetooth wireless earphones.

Being a bit of an audiophile (just a hint!), and being a fan of Sennheiser headphones, I browsed for their line of bluetooth earphones. After a bit of looking around, I ended up being a fond of their HD1 wireless -- the ones that have a neck band. I initially liked the neck band type because I can just hide it under my collar during work while I work. However, the price was steep for something that will eventually get beaten up by oil, dirt, etc. Also for the fact that the band is leather-coated -- that would just fall apart from the sweat over time. I needed an alternative that meets my needs; lightweight, persevere through the day without dying, noise isolation, waterproof to some degree, and within my budget.

My computer has a sound card made by Creative Labs. I loved their signal to noise ratio and sound production, thus I wanted to see if they were making the earphones I was looking for. They do! At first, I was looking at their Outlier Ones but I feared it may not survive my workplace. Then I stumbled upon these. These ones are sweat-proof and supposedly can last 11 hours -- although I'm inclined to think it would be a little less. But the one that made me buy these right away is the weight and aptX support.

I'm wearing it as I'm writing this and it does not weigh my ears down, nor my ears feel any tension. It's almost like I'm not wearing anything at all -- the only giveaway is the earbuds.

AptX pretty much has a higher bluetooth bandwidth compared to older types that allows for higher quality sound production. My phone supports aptX, so it's a big plus for me. Just pay in mind some phones may not be able to make use of it.

The sound coming out of these are great, considering the price. The bass is definitely there. Not overwhelming, but not too weak also. The mids are very good. The treble? Well, to be honest some trebles in my songs ended up having some tingy "s"-es. Then again, it's not something you can't fix with your phones' equalizer settings. It's still a win for us.

The earphones come along with multiple ear tips and sound blockers. I use the smallest ear tip, and just the circular sound blocker. I don't think you really need the ones that has a 'tail' as long as you're not chasing a jaguar.

When these came out of the box, the wires were challenging to straighten. Since it's been crammed into tight spaces, the wires are a bit curved around. I had to play around with it to get it straight. Have fun. :)

All in all, these are a steal. Sweat-proof (resistant?), very light, affordable, great sound quality production, and convenient. I would recommend these to those who seek for the same things as I have when browsing for wireless earphones.

Brent Smith
3.0 out of 5 starsGenerally decent headphones, but Creative is clearly cutting costs somewhere in newer pairs
31 December 2018 - Published on Amazon.com
Colour: BlueVerified Purchase
I'm very hard on headphones and I actually ordered these for a second time after my first pair succumbed to heavy use/abuse. If you do what I didn't do and keep them in their pouch and don't work in a kitchen, I'm sure they'll last for years instead of just 8 months or so. I reordered them because I loved the design, how secure they felt in my ears, the amazing >9 hour battery life, and they resisted being mistreated amazingly well considering I constantly left them balled up in my pocket.

That being said, after I got my second pair in the mail, I noticed that they felt slightly different, so I compared them to my older pair. Creative is definitely cutting corners with their materials and design without any disclosure to the customer. The wire that holds everything together now is at least 20% thinner, the control buttons feel distinctly different and cheaper, and the actual module that houses the buttons feels like a lower quality plastic.

They're getting three stars from me because I feel misled as there was no indication that I was getting what appears to be a significantly worse change in materials and possibly quality. Normally when a company cheaps out like this they call it a new model year or at least give some sort of indicator of the changes.

I've only had the new pair for a few days, if these appear to fail where the old ones didn't, and sooner, I'll definitely come back and adjust my review accordingly. They still sound better than the Mee Audio X6s I have, but durability is very important in something designed for activity.
Read more
4 people found this helpful.

Mike Lowery
2.0 out of 5 starsGreat Sound Quality But Unusable Because of Mic Sensitivity
20 May 2019 - Published on Amazon.com
Colour: BlueVerified Purchase
The sound quality for listening to music is excellent per usual with Creative audio devices, whether speakers or earphones. The bass depth is good to allow enjoyment of bass in classic 70s, R&B, funk and jazz; but there is also crisp clarity for enjoyment of highs and midrange. The audio quality for calls is excellent as well. The rating for these listening functions is 4.5 stars. However, the major deficiency of these headphones is an extraordinarily sensitive microphone and absolutely no noise cancellation. Callers consistently advise of disturbing background noise. You cannot walk down a city or even suburban street while using these headphones for a call. The sound of every passing car is clearly heard and in fact amplified. Also using them for a call inside the house presents sound perils as well. Any audible noise from a television will be heard and again amplified by the mic to the disturbance of the person on the other end of a call. During a call while preparing breakfast, I was advised that the sound of me putting butter on toast created an unbearable background disturbance. So, for telephone conversations, the only environment where these earphones can be used is in an absolutely quiet space, perhaps inside of a car where there is no radio playing or conversation taking place or in a quiet room.

I am a hugh fan of Creative from the days of its early MP3 players, Zen and Muvo, and wired speakers and headphones. Creative is in fact my default brand for audio, which is why I purchased these earphones. I wanted to love them and be able to give them 5 stars. Unfortunately, I can barely use them for 50% of their intended purpose, so I have to give them a disappointing 2 star rating. Soundpeats Q30s are preferable and superior in everyway, and can be found for half the price of the Outliers. Sorry Creative.
Read more
2 people found this helpful.
Go to Amazon.com to see all 91 reviews 3.9 out of 5 stars
Free & fast delivery, movies and more with Amazon Prime
Prime members enjoy free & fast delivery, exclusive access to movies, TV shows, games, and more.
> Get started
Back to top
Get to Know Us
Connect with Us
Make Money with Us
Let Us Help You
© 1996-2020, Amazon.com, Inc. or its affiliates