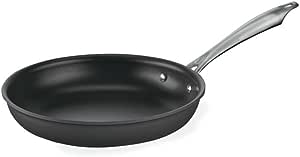 One of the most popular pieces of cookware, the skillet offers a wide, flat base and gently curved sides--great for making pancakes, veggie omelets, or grilled cheese sandwiches then sliding them effortlessly from the pan to a plate. This 10-inches open skillet by Cuisinart is no exception. Its flared rim also makes it possible to pour sauces and gravies without messy drips. The skillet, which measures approximately 18-1/2 by 10-1/2 by 2 inches, makes a nice addition to any cookware collection. Thanks to its hard-anodized aluminum construction with a pure aluminum core, the cookware heats quickly and evenly with no hot spots to worry about. It also provides a smooth nonstick Eterna coating that not only ensures effortless food release and lower-fat cooking options (no need for excess oil or butter), but it's also metal-utensil safe and ultra durable for long-lasting, high-quality performance. The skillet's contoured stainless-steel handle comes riveted for strength, offers an ergonomic design for comfort, and stays cool to the touch on the stovetop. The cookware also features exclusive ArmourGuard technology, which means it can stand up to the high temperature and washing and drying cycles of the dishwasher. Cuisinart covers the cookware with a limited . From the Manufacturer Cuisinart Dishwasher Safe Anodized Cookware Evolutionary Design Our exclusive ArmourGuard technology offers a rich hard-anodized exterior with the convenience of dishwasher cleanup. Features: The World's Longest Lasting Nonstick Eterna nonstick cooking surface is truly advanced, providing unsurpassed release and ultra-durability. Metal utensil safe.  Professional Performance Hard anodized construction for superior durability and optimal cooking performance. Even heat distribution eliminates hot spots.  Ergonomic Handles Contoured stainless steel stick handles stay cool on the stovetop. Side grips ensure balanced cooking.  Tempered Glass Covers Glass lids fit tight to lock in flavor, texture and nutrients. Wide, easy grip handles.

Ridley
5.0 out of 5 stars Good pan
26 September 2020
Size Name: 12-InchVerified Purchase
Great pan and I love it because I can use metal on it
Read more
Helpful
Report abuse

Shooshie
5.0 out of 5 stars THE skillet for those who like to flip food — slick, durable, excellent design!
29 June 2018 - Published on Amazon.com
Size Name: 10-InchesVerified Purchase
I've searched for the world's best skillets for decades, and I've bought a lot of them. I don't want a skillet that I have to maintain carefully, like a cast-iron skillet. Someone always comes along and washes it with soap, thinking they are helping, and then you have to start over. I've got several, and it happens every time. (of course, seasoned cast iron skillets are great)

I also am leery of Teflon and other similar products. I know they get most of the bad stuff out of it before the process is complete, but Teflon is so bad to peel off and get in your food. I've probably swallowed a cup full of it over my lifetime.

When I saw this anodized skillet, I thought this might be worth giving a try. WOW! Not only is the skillet non-stick and wonderfully so, but it was designed by a real chef. I don't know who, but from the moment I picked it up I could tell. It's well-balanced. The handle will never come loose. The handle is metal, but never gets hot where you hold it. (does get hot next to the skillet, though) This means you can put it in the oven!

But there is one more little trick that this skillet knows, and I don't see many people explaining it. It looks like the food would slosh out if you try to flip with this skillet, but in fact the food goes straight up, and a little back toward the center; the perfect behavior for hot food that's being flipped into the air and turned and caught again. Why? It's not evident in pictures or even when looking right at it, but if you feel just below the inside top edge, you will feel a subtle "lip" that is precisely enough to direct the food back toward the center without overdoing it. Be careful, though: this skillet will spoil you. After using this skillet, you may find others a little harder to flip food with. You get used to this, and others don't feel right anymore.

I've been using it a couple months, now. Not a scratch on it. Nor is there a crumb of food or stain of oil on it. Oh... also, I use metal spoons in it. Carefully, of course, but the important thing is that metal isn't inevitably going to scrape off the finish. It's very durable. I clean it with a paper towel while it's still warm. Sometimes I'll dampen the towel a little, so that it collects food better, but other than that, I don't add anything to it. Just wipe it out. It comes clean!
Read more
54 people found this helpful

Paul
3.0 out of 5 stars Almost a great pan!
18 November 2018 - Published on Amazon.com
Size Name: 12-InchVerified Purchase
I have four of these Cuisinart pans in different sizes. The non-stick works great, and they look great. I don't clean them in the dishwasher, and I also don't heat them up on the high setting. That being said my problem is with the bottom of the pan warping on the bigger pans. I realize they can do this from excessive Heat, but I'm very careful on how hot they get because I'm aware of the problem. I usually use on a glass cooktop and when they Warp they don't sit flush and consequently will cook unevenly. If I had a gas range that wouldn't be a problem. I have banged it pretty flat but it's not perfect. Next time I will be looking for a heavier-duty pan for sure.
Read more
14 people found this helpful

Karen
5.0 out of 5 stars A Superb Pan
8 February 2017 - Published on Amazon.com
Size Name: 10-InchesVerified Purchase
I have had and used this pan for over a year now, and I love it. It has a very nice heft - it's not heavy but not too light. I have never had any problems with sticking except on the handle rivets - but that is easily cleaned up with a Scotch-Brite blue non-scratch scrubber. I frequently make scrambled eggs and omelets in it - and it works wonderfully. I also have all-clad stainless, but would never think of making eggs in those pans again.

I have seen no signs of scratching or damage. I do hand wash it (you can practically just rinse it out) and I also use silicone tools (although you aren't supposed to have to). I'm pretty demanding, and am delighted with this purchase.
Read more
19 people found this helpful

RL
5.0 out of 5 stars Surprise bonus
3 February 2019 - Published on Amazon.com
Verified Purchase
The skillet's quality is as good as I expected. The surprise bonus is that even though it is an open skillet, the lid to Calphalon N-S Sauce Pan Black 2.5 Qt 1876967, which I ordered a the same time, fits the skillet perfectly. What a happy coincidence.
Read more
13 people found this helpful

GE
5.0 out of 5 stars Great pan! Quality cooking, durable after a year of use
3 January 2021 - Published on Amazon.com
Verified Purchase
Purchased this skillet for omelettes I make every single day. Bought this and the 622 model after reading that Teflon coatings are basically different chemical products and these two models use different levels of those products - hence why this is dishwasher safe and the 622 is not. Both are prone to buildup if you use sprays with propellant in them, and both are going to eventually lose their nonstick (which I measure based on the ability to slide the omelette off well enough to flip it in the air while cooking without losing part of it due to sticking to buildup).

Ultimately both are about the same to me, the longevity is more based on your care than the variety of Teflon coating based on my experience here - both are quality.

If you really want to go nuts on researching and evaluating nonstick cookware be sure to check the type of Teflon coating they use, there are only a couple out there and they are not made by the Cuisinarts of the world but some chemical company.

If you operate under the assumption you will screw up the Teflon because you live with people who stack pans, use metal utensils, and use propellant based spray oils, just get the 622 model since it’s cheaper. I wouldn’t expect this to last over 100 uses with heavy abuse before the nonstick starts to fail, but it can probably go several hundred uses at least without abuse.
Read more
2 people found this helpful
Go to Amazon.com to see all 302 reviews 4.5 out of 5 stars
Back to top
Get to Know Us
Connect with Us
Make Money with Us
Let Us Help You
© 1996-2021, Amazon.com, Inc. or its affiliates