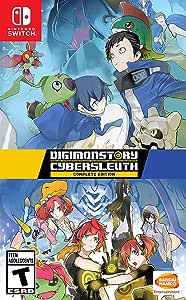 by BANDAI NAMCO Entertainment
Platform : Nintendo Switch
5.0 out of 5 stars 2 ratings
Secure transaction
Returns Policy
Your transaction is secure
We work hard to protect your security and privacy. Our payment security system encrypts your information during transmission. We don’t share your credit card details with third-party sellers and we don’t sell your information to others. Find out more
New (4) from S$48.90 & FREE Delivery

There are 0 customer reviews and 2 customer ratings.

James S. Goulding
5.0 out of 5 stars A Great Monster Collecting and Battling Game for a more Mature Audience!
18 November 2019 - Published on Amazon.com
Verified Purchase
I'm writing this review after clocking in over 250+ hours across both games, and I have to say that my experience was quite enjoyable! Here are my thoughts:

Pros:
- Both games feature a really nice, engaging story with interesting characters. (Hacker's Memory especially.)
- While not all 1300+ Digimon are featured in these games, the cast still has a large amount of variety and its easy to tell they put effort and care into animating each one. (Every digimon has a signature move that is especially snazzy.) They also went the extra mile to have your team of Digimon follow you around in the overworld, which is a nice touch.
- The games run well and have a consistent frame rate, I also never noticed any graphical issues or slowdown. Load times are usually pretty fast.
- Features an absolutely wonderful soundtrack composed by Masafumi Takada of Dangan Ronpa fame.
- Having the ability to instantly start random encounters and the Auto-Battle function are great QoL features that make the grinding you have to do (it IS a JRPG after all) significantly less time consuming.
- Challenging, but not frustrating. I played both games on the normal difficulty, and I feel the difficulty ramped up pretty naturally over the course of the game, with a few exceptions in the post-game content. (Lucemon-I'm looking at you!)
- Has a satisfying visual style and great character design. I particular love the look of both game's protagonists.
- Has a much deeper and more complex evolution system then most games of its type-while most evolutions are straightforward, others can require some planning ahead of time to get what you want, which-in my opinion-makes it much more satisfying.

Cons-
- A pretty iffy localization. Probably my biggest problem with this game, while it is fine 90% of the time, there are some occasions where the translated text isn't formatted correctly or uses a shoddy translation (the improper usage of "Bakemon" in a certain storyline confused me for a long time). The most egregious of these issues is the fact that the dialogue for the male protagonist of Cyber Sleuth was copied over almost exactly to the female protagonist- which can cause some very awkward moments where characters refer to you as male when playing a female character. Hacker's Memory was more polished in this regard.
- No English dub for the dialogue. This is not a big deal for me-the Japanese cast did great work and is full of many talented voice actors, but I know many people who would consider this a con. (You can also toggle off the voices entirely if you wish.)
- These games both feature strong language and tackle some pretty dark subject matter, while this is a pro for me, It can be off putting for some people, and I wouldn't recommend it to kids younger than 13.
- Has a bit of a learning curve. The game does give you a pretty succinct tutorial at the beginning of the game regarding combat, but a few of the deeper mechanics aren't explained as clearly. This game doesn't hold your hand as much as its other contemporaries-and some googling might be required.
- Can be a bit grindy at times. While the aforementioned features I talked about above do make grinding easier, if you want to get all of the Digimon you have to be prepared to spend quite a bit of time doing it-either out in the world or in the mirror dungeon feature. The way the game handles raising Digimon and evolution kind of necessitates this, but I can see it putting certain people off.
- Many dungeon designs can feel a bit same-y in terms of looks, this is mostly an issue towards the beginning of Cyber Sleuth, and It was a bit tiring going back to Kowloon so many times. This issue lessens after a few chapters.

All-in-all, I think that both of these games are great and I heartily recommend them to both Digimon fans and newcomers alike. I really hope to see more entries in this series in the future.
Read more
66 people found this helpful

Brittany M. Ydstie
5.0 out of 5 stars Great Digimon Game!!!
21 October 2019 - Published on Amazon.com
Verified Purchase
I played both games on PS4, but enjoying it 10x more on the Switch! One of the best Digimon RPG-based games in the series with many optional digital monsters to raise!

I hope we'll get Digimon World: Next Order on Switch next, as I can see it working better on the Switch then PS4 or Vita. I love the World series and would love to see more of it outside of Japan!!!
Read more

5.0 out of 5 stars Great Digimon Game!!!
Reviewed in the United States on 21 October 2019
I played both games on PS4, but enjoying it 10x more on the Switch! One of the best Digimon RPG-based games in the series with many optional digital monsters to raise!

I hope we'll get Digimon World: Next Order on Switch next, as I can see it working better on the Switch then PS4 or Vita. I love the World series and would love to see more of it outside of Japan!!!

Jake G
5.0 out of 5 stars Amazing
22 October 2019 - Published on Amazon.com
Verified Purchase
Port is extremely well done and it's two games on one cartridge for $50.

If you like turn based games in any capacity, I highly recommend this.
Read more
22 people found this helpful

Loops
4.0 out of 5 stars If you want a good Monster Catching RPG and Pokemon turned you off, this should do.
8 December 2019 - Published on Amazon.com
Verified Purchase
Haven't touched a Digimon game since World 4 on the Gamecube over a decade ago, and this was a nice refreshing experience after not having played in so long. I can't give it 4 & 1/2 stars which I think it deserves more, but it does feel a little sloppy in some areas so at least 4 stars is a good solid rating for this title.

The monster evolutions and catching are expansive and there's lots of variety for you to choose to match your play-style. This 2 in 1 game has made it easier to get some of the late game evolutions, and besides typos and translation errors and some small niggling quality of life problems everything works as it should and after 100 hours I'd only encountered one issue that seemed close to a bug or glitch. Nothing that ruins the game though.

Don't make the mistake of starting with Hacker's Memory like I did, as it more or less takes place first, but you can play either one and get mostly the same level of enjoyment out of the games. All in all, having not touched a Digimon game in over a decade, I'm happy this was my return to the series after the latest 'safe' and disappointing Pokemon title. And with the same price nearly as a 3DS title would be, it's a great buy with both games and all the DLC included.
Read more
10 people found this helpful

Hannah
5.0 out of 5 stars Exactly What Pokémon Sword and Shield Was Missing
14 December 2019 - Published on Amazon.com
Verified Purchase
I originally bought Cybersleuth for the PS4 when it came out a few years ago. I put well over 100hrs into it and didn’t get bored. My only issue with the game was I wished it could be played on a handheld. I think you could play it on the Vita, but I had a 3ds so that didn’t help. Anyways, I was sure to pick up this game when I got the Switch. I didn’t start playing until I finished Pokémon Sword and boy is it a breath of fresh air in comparison! The Digimon are so much more varied and unique compared to the Pokémon and it’s way more fun to digivolve and de-digivolve to get more different types. It’s way less of a grind to get the different types of Digimon and their animations are way better. I feel like they have improved the translations a bit from the PS4 version as well. It’s a great game, but the beginning has a lot of dialogue to get through so that can be boring, but all in all, I love it!
Read more
13 people found this helpful
Go to Amazon.com to see all 149 reviews 4.5 out of 5 stars
Back to top
Get to Know Us
Connect with Us
Make Money with Us
Let Us Help You
© 1996-2021, Amazon.com, Inc. or its affiliates