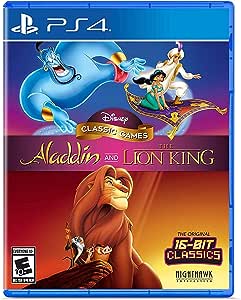 Built by a team of industry veterans, With a strong focus on both digital and physical publishing, co-publishing and distribution. We welcome any game developer from a one person indie to an experienced studio to send us your pitch. Whether it’s just an idea on paper or a completed game in need of a physical release.

We believe in supporting creative development and minimizing impact to the artistic process. Our primary mission is to support and foster the creativity of all game developers.

XZero
4.0 out of 5 stars A Solid Retro Package with Great Bonuses
30 October 2019 - Published on Amazon.com
Platform For Display: PlayStation 4
Digital Eclipse, the studio responsible for a recent string of phenomenal retro game collections, has produced one of its best compilations in Disney Classic Games: Aladdin and Lion King. Some very smart features and a treasure trove of extras make this a collection worth owning, but not without a little bit of disappointment along the way.

Disney Classic Games: Aladdin and The Lion King is a compilation of games that stem from the early-to-mid 1990s, an era where licensed movie tie-in games were extremely common. Another commonality of the era was that often the same license would be distributed to different developers for different platforms, so the Super Nintendo and Sega Genesis versions of games would often be markedly different despite sharing the title and source material. This leads to the biggest disappointment, and quite frankly, the reason this set gets 4 stars instead of 5 from me: the SNES version of Aladdin is missing. All of the titles on this set were developed by Virgin Interactive, but Capcom developed the SNES version of Aladdin and evidently the parties were unable to negotiate its inclusion into this package. That fact is disappointing, as the SNES version of Aladdin is quite good and very different from the Sega Genesis counterpart.

All of the games play wonderfully and are phenomenally emulated. They look and sound exactly as you would expect. The SNES version of The Lion King is a particular treat from an audio standpoint, featuring an excellent array of remixed music from the Hans Zimmer film score. The set includes all of the features you'd expect: backgrounds, different screen size options, button mapping, etc. There is also the option to turn on certain cheats such as stage select or invincibility, which help but some of the cheats deactivate trophies/achievements (the ones available from the main menu; cheats entered in the games themselves do not).

The biggest improvement to these games is the ability to rewind by tapping or holding L1. In the 1990s, the rise and popularity of Blockbuster Video and similar rental stores irked game publishers. Consequently, some games were specifically designed to combat that by being virtually unbeatable in a single weekend rental. The Lion King is one such game. The first stage is extremely easy, but the second stage, themed around "I Just Can't Wait to Be King," is extremely difficult, featuring complex-for-a-kids-game puzzle segments and several auto-run sections where death is practically assured. Using the rewind feature, you can simple try a jump again. As a kid, I completed the second level of The Lion King exactly once. As an adult, I have no shame in admitting that I abused the Rewind feature to get through it. The Rewind feature, unlike the more formal cheats, does not deactivate trophies either.

One minor gripe about trophies is that there are 15, 12 of which come from playing the Aladdin games. The only Lion King-related trophies are for beating the game on its various difficulty levels. There are far more creative ways to implement trophies than this, and it is disappointing to see how they were utilized in this game.

Finally, the collection includes an incredible volume of extras. Videos of the games' production, key art, excerpts from style guides, music players--it really is pretty much everything you could ever ask for in terms of digging into the games' history.

If you grew up with the original versions of these games, this is a great way to re-experience them. I'd sooner pop in the PS4 disc or Switch cart than pull out my original cartridges for them. With the live-action remakes that came out in 2019, many kids may be interested in experiencing the original animated movies and possibly their tie-in games. This is easily the best way for kids (and adults) to experience these games thanks to the rewind feature which makes them far more playable and fun and removes the frustration factor. An underwhelming trophy list and the absence of the SNES version of Aladdin are disappointing and the latter materially impacts my overall score, but these should not deter anyone from buying this set. This is doubly true if you grew up with these games and now have kids of your own--it's a wonderful way to share these games with a new generation and make for some fun family experiences.

Scott C. Funderburk
4.0 out of 5 stars Awfully Classic
1 January 2020 - Published on Amazon.com
Platform For Display: PlayStation 4Verified Purchase
Disney did right by these two classic titles. They are just as awful to play as they were back then. The difficulty is still intact and even allow you to use some built-in cheats to make them more bearable. With the exception of Aladdin for the SNES, I still don't like any of the games offered here very much. The Lion King is still a pain to complete the second or third level in and the Genesis version of Aladdin will still frustrate you.

They added some amazing features here that I would love to see more of for future releases. Not only is every version of each game included, they even added some unreleased or "patched" versions of the game. One mode allows you to play the game in the way the developers intended, if they had more time during the original development. It's a genius concept and deserves praise.

This package brings nostalgia in the sense that they are just as bad and frustrating as you remember. Good luck tossing Scare off that cliff Simba! I would much rather spend my time in the places the light can't touch than play these for more than a laugh.
Read more
5 people found this helpful

Jonathan Manuel Alcantara Baylon
4.0 out of 5 stars 3 Versions of Each game
11 December 2019 - Published on Amazon.com
Platform For Display: PlayStation 4Verified Purchase
It is just as the game case describes, however The Lion King is More difficult than what I had remembered, and the disney's Aladdin game was easier than what I remember from when I was 5 years old.
Read more
5 people found this helpful

rockdaisy
5.0 out of 5 stars Love it
9 November 2019 - Published on Amazon.com
Platform For Display: PlayStation 4Verified Purchase
I love that game came out for the ps4 and I hope they bring out more of the disney games. The controls are pretty decent and honestly match the sega version controls pretty well. Especially since I have played the Aladdin game in the last few years on a sega console. It's definitely worth the buy.
Read more
3 people found this helpful

Mr. Right
3.0 out of 5 stars Short-lived nostalgia enjoyment
9 May 2020 - Published on Amazon.com
Platform For Display: PlayStation 4Verified Purchase
A fun afternoon of nostalgia but overpriced. Would be a decent deal for $10-$15. Aladdin is fun but pretty easy, Lion King is brutally cheap and super difficult. Comes with several versions of each game but they're all basically the same. Once you've played through one version of each there's really nothing else to do.
Read more
2 people found this helpful
Go to Amazon.com to see all 78 reviews 4.3 out of 5 stars
Back to top
Get to Know Us
Connect with Us
Make Money with Us
Let Us Help You
© 1996-2021, Amazon.com, Inc. or its affiliates