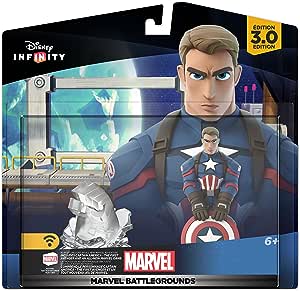 by Disney INFINITY
Platform : Not Machine Specific
Arrives before Christmas.
In stock.
International product from outside Singapore Learn More.

Fastest delivery: 9 - 11 Dec. Details
Ships from and sold by Amazon US.

Get ready for Cyberpunk 2077
Video Games and more Shop now

Evil forces scheme for world conquest as they pit Marvel's greatest Super Heroes against each other! It's an all out brawl in Marvel Battlegrounds! • Engage in 4-player combat and battle in 12 levels across 8 epic new arenas! • Customize your game with up to 6 Round Marvel Power Discs per match • Select Super Heroes and Villains from your ENTIRE collection of Marvel characters in Disney Infinity • Smash through floors, walls and tear down the environment as you battle to defeat your opponents • 28 characters to collect and more to come! Use Captain America's shield to attack from a distance and increase the power of close quarters combat.

The Avengers’ leader stands as a beacon of justice, ready to defend the Earth against any foe.

Disney Infinity 3.0 Edition now welcomes Star Wars to the ever-growing collection of Marvel, Disney and DisneyPixar characters, stories and worlds. Together new heroes can join forces with characters from previous editions and embark on adventures as big as your imagination in the Toy Box!

Play with new Star Wars, Marvel, Disney and DisneyPixar figures in Disney Infinity 3.0 Edition! Take on epic heroic abilities, earn upgradable skills and use Lightsaber-wielding abilities for all your characters in the Toy Box!

Mr. Pemberlee
4.0 out of 5 stars Almost Smash Bros for MARVEL
16 August 2016 - Published on Amazon.com
Verified Purchase
Figure: I think this version of Cap looks much better than the 2.0 version. Every detail in the sculpt makes this figure look so cool. So, if you're buying this because you collect figures then this is a must have!!

Figure Gameplay: Oddly he's not as tough as the 2.0 version. His special move is kind of weak. Because of this, my boys (I have four) rarely choose this version for toy box mode. However, since special moves and levels don't matter in 'Battlegrounds' we do use him when we play that game.

Gameplay: You get to battle all your MARVEL infinity characters. No Disney and no Star Wars. Another oddity is level, skill tree, and special moves are not part of the gameplay. Each character has special moves but if you've leveled up your figure and chosen enhancements from the skill tree these are not factored into 'Battlegrounds'. Four-player local battles is the reason we bought this game. We have fun with this. The stages are different enough. And it is great to battle all our super heroes. My only gripe is that it takes too long to load a new game. We are used to playing Smash Bros. which loads as expected. It may just be our Wii U, but I think it is slow because it is a sub game of the infinity game. Either way, if you don't mind the loading time for new battles then it's a fun to bring Hulk, Thor, Venom, and Veronica together for a Battle Royale!!

After owning this for 6-months, we rarely play 'Battlegrounds' because my boys prefer the gameplay of Smash Bros over this game. They do play toy box mode but as I mentioned earlier this version of cap isn't as tough so they don't use him. Which means Cap has found his way to my desk to share company with other cool looking fanboy figures.

Too bad Disney has given up infinity. Even though I hated the price, I really liked the figures.
Read more

MB
1.0 out of 5 stars Terrible game
26 August 2018 - Published on Amazon.com
Verified Purchase
I thought the 2.0 game play was too short and not a very good game
This exceeds new levels of sucking
The game play is like playing half of a mini game
Cant believe they actually sold this as a real game
U cant upgrade ur skill tree without leaving and going to the toy box
Complete wast of time
And they added a whole new uncessasry part where u first have to apply the experience points to ur character
Stick with star wars force awakens game thats about as good as ur going to get on this terrible console
Read more
One person found this helpful

Bob Emmerich
4.0 out of 5 stars If you already own DI 3.0 and some Marvel figures, it's worth it for rmultiplayer
17 March 2016 - Published on Amazon.com
Verified Purchase
I can see why people would get upset as this is listed as a "play set" when it's really just a 4-player fighting game, but as a 4-player fighting game I think it's a pretty good one and I think we'll go back to it a lot. Not for the story mode, nobody cares, but there aren't a lot of 4 player fighters outside of Super Smash Brothers, and I prefer this open area approach much more than the 2D in Smash. We also paid $19.99, and that included the Captain America figure which goes for $12-$13, so even if you say the figure is only worth $10 that still makes this a $10 4-player couch fighting game with several different modes of play. It probably helps that we already own about 20 of the figures, and the game. I woudln't recommend to anyone to buy 3.0 for this, or spend $10 per toy just to use them in this. But for those who already own 3.0 and a bunch of toys, who want some 3-4 player fun gaming, I think you can't go wrong picking this up. I realize there are a whole lot of "ifs" in there, but I think that who the market is, and for that market i's easily 4 stars.

Bought the Wii U version, update was already installed, game started right up, which was a concern for me because the Wii U doesn't always get the DLC for games that other platforms get. And for those who just want to try it out, both the game and the Captain America figure work without opening the box, just sat it on the platform. You only get 1 mod to start, so do the 8 part tutorial, save, back out, then go back in for all of the vs modes and customization options. Game also works with 6 "power-up" discs at a time, but we don't own any of those despite owning 45 figures, and the game supplied it's own power-ups in battle, so they weren't missed. And the 2 Captain America figures do play slightly differently if anybody is wondering.

Also, we all found this game - my 2 sons and I - much better that PSASBR. Another SSB clone, but not a very good one. Made $20 for this seem like a bargain, and we only paid $5 for that one.
Read more
33 people found this helpful

tee_rose_29
5.0 out of 5 stars Very good game hours of fun!!
5 April 2016 - Published on Amazon.com
Verified Purchase
My child and I had a blast with this game....We had a hard time putting it down.. What we both liked was once you added the figure to the game it did not have to keep it on the base...Aalso we like the idea if you did not have a finger you could still play it for a little while... We love this game...
Read more
5 people found this helpful

My son had wanted this character and world for some time. We found it on here for less than half the original price. It came the next day and my boy was nothing but smiles. We play on the xbox 360 and this world came with a cool trial pack to try out any character from the world with out buying. Definately recommend.
Read more
4 people found this helpful
Go to Amazon.com to see all 224 reviews 4.1 out of 5 stars
Free & fast delivery, movies and more with Amazon Prime
Prime members enjoy free & fast delivery, exclusive access to movies, TV shows, games, and more.
> Get started
Back to top
Get to Know Us
Connect with Us
Make Money with Us
Let Us Help You
© 1996-2020, Amazon.com, Inc. or its affiliates