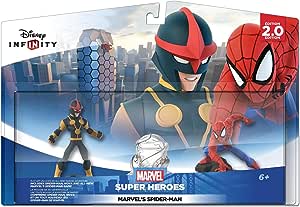 by Disney
Platform : Not Machine Specific
Arrives before Christmas.
In stock.
International product from outside Singapore Learn More.

Fastest delivery: 30 Nov. - 2 Dec. Details
Ships from and sold by Amazon US.

Bryan T. White
5.0 out of 5 stars A Must-Have
21 April 2016 - Published on Amazon.com
Verified Purchase
Spider-Man and Nova are very fun to play as in the playset!

Of course, you are probably buying this because of Spider-Man. From time to time, he brags about himself during play. Web slinging is definitely what gets you addicted to him. What is weird is that you can sling through open air, but it's still fun despite that. It gets you across the city very quickly. Spidey is sort of a mix between Stitch and Mrs. Incredible, owing to the fact that he can Wall-Crawl and shoot web lines onto buildings to get him onto it quickly. You can upgrade him to shoot webs out of both hands. When you hold down x (Wii U controler), he swings a rock attached to a web line 'round and 'round, slapping nearby enemies until you release the button or he gets tired and throws the rock in whatever direction you are facing. His Special Move is not what I'd consider very helpful, though. Spider-Man jumps into the air and shoots his surrounding enemies with webs that freeze them for a few seconds, but this only affects a small area and does not stun them forever. Other than that, no complaint for him!

I have noticed that nobody really seems to care about Nova, but he is also a fun addition to the pack. When he speaks, it sort of gives you the impression of an annoying teenager. Every time you block, dodge, or fly, this blue misty sort of energy surrounds him. When he is in the air, he is faster than the other flying characters. You can also upgrade him to shoot out of both hands. When you hold x (again, Wii U controler), Nova lifts average-size foes up into the air and he casts them away. When performing his Special Move, he casts a growing large blue sphere outwards. The Special Move can be upgraded to improve Nova's health. Don't underestimate him!

The playset itself is very fun. The Daily Bugle tower is probably my favorite part of it. J. Jonah Jameson is heard on his broadcast complaining about Spider-Man and the other S.H.I.E.L.D. members every time you go by it. You can see the Avengers tower in the distance, but unfortunately it is unreachable due to boundaries. It is very similar to the Avengers playset because it's got similar buildings such as the bridges and Statue of Liberty. The bonus boxes are not hard to find, it's just a matter of actually reaching them. As for Crossover Coins (which allow you to use characters that are not necessarily part of the playset), they allow the Hulk and Iron Man into the game, and that comes in handy when all the characters you have that go in the set are defeated. The Crossover coins are all grouped together, so they are not hard to find, which I guess is okay. The missions are given by a variety of people, such as Black Cat, White Tiger, and some S.H.I.E.L.D. members, which make gameplay enjoyable.

Here is a list of all the characters that work in the Spider-Man playset:

Well, I guess that wraps it up! Bottom line: A Must-Have.

Shawn Mitchell
5.0 out of 5 stars fantastic
26 September 2016 - Published on Amazon.com
Verified Purchase
My kids have been playing with this character nonstop since we got it. Was so excited to find this figure, because we couldn't find it locally. It is a hit with the kids. Great price too!
Very well made and fun to play on screen with.
Take on epic heroic abilities, earn up-gradable skills and use Lightsaber-wielding abilities for all your characters in the Toy Box!
Any Infinity figure can work in the Toy Box Hub, but play sets only have specific Infinity 2.0 or 3.0 characters that work with them according to Franchise. Galactic Heroes (Disney's term for Star Wars) won't work with Super Heroes (Marvel) and so forth.
Even if you are just looking for a figurine to put on your shelf, this is a very solid one.
Great Product to bad Disney has discontinued this product.
Read more
2 people found this helpful

Superfly1972
5.0 out of 5 stars Does whatever a spider can!
18 April 2017 - Published on Amazon.com
Verified Purchase
Great playset. New York City, so it's large. Just don't try to go over bridges to another borough. But lots of missions and side missions. Each time you unlock a vehicle for use, it will be in your toybox. Two Marvel characters crossover into this playset. Hulk, and Ironman. It's a shame the licensing was what it was then, or spidey would crossover to the Avengers playset. Still, fun and interesting.
Read more
One person found this helpful

Tim B.
5.0 out of 5 stars Easily a must-have if you are a Marvel fan looking to expand your Infinity collection.
2 March 2016 - Published on Amazon.com
Verified Purchase
This set is a great bang for your buck if you want even more Marvel superhero goodness out of Infinity 2.0. As with the Avengers set you're pretty much getting a full game. Whereas with Avengers you got a chunk of central Manhattan, Spider-Man puts you in lower Manhattan, and you can even see the Avengers tower if you go towards the edge of the map (although you can't actually travel to it). Like the Avengers set, it's a fun open-world superhero game with plenty of beat 'em up combat that will keep both adults and kids entertained, as well as some environmental puzzles and platforming challenges. Both kids and adults should enjoy it, and like Avengers it's great for co-op. You can also unlock Hulk and Iron Man as crossover characters with unique missions, though finding all the unlock tokens feels like it's more trouble than it's worth sometimes. Good luck finding that last Iron Man token.

Of course, what I'm sure you're really interested in is Spider-Man himself. I'm pleased to say he controls very well. If you played Spider-Man 2 back in the day, you will be reminded of that game although the web slinging and wall crawling here are a fair bit more simplified. You press the jump button after a high jump to shoot a new web to swing from. Like the old 60's cartoon Spidey's webs are attaching to some invisible out of shot floating tile, however the actual swinging does feel like it has real weight and physics, which feels very satisfying and allows for some fun tricks. Spidey also has his zipline feature, although it feels a little bit unwieldy, and he can quickly fire his web shooters as a ranged attack that can glue enemies in place temporarily.

The Spider-Man toy itself is very dynamic looking with a good quality sculpt, although Spider-Man's webbing doesn't really pop the way it does in the game and official renders because there are no paint apps for it. I ended up taking some Citadel Nuln Oil from my war gaming paints and going over all the webbing with a very fine brush, which really made the figurine pop the way I wanted it to, and it's now instantly recognizable as Spider-Man. If you have the skill and patience you might want to give this extra step a try, and if you mess up it's easy to reverse with some rubbing alcohol and a napkin.

And that brings me to Nova. Ugh. Why oh why did they have to include a nobody like Nova as the second character? I get that Disney likes to include less popular characters in these two packs, and in terms of gameplay he packs plenty of punch (he basically plays like Iron Man but with unique animations), but there are many characters they could have included with this set who would have been plenty more recognizable, especially in relation to the Spider-Man franchise. Admittedly, I'm not the hugest Cosmic Marvel fan and it's hard for me to fairly judge this toy. I don't see myself ever putting him on display, so I'll probably end up just trading him in and buying Venom.

Overall, if I'm rating fairly I give this set 5 stars. This is a good example of what a Disney Infinity set should be and I'm quite happy to have added it to my collection. If I was rating it purely as someone who likes Spider-Man and doesn't care so much about Nova, I'd give it 4 stars because I would rather have had a second hero I'm more familiar with (Daredevil anyone?), and also I would have liked to have seen some paint on Spidey's webs instead of having to do it myself. I guess you should think of this as a 4.5 star rating. This is easily a must-have if you are a Marvel fan looking to expand your Infinity collection.
Read more

Evan C. Trahan
4.0 out of 5 stars Hours of Family Fun!
26 June 2016 - Published on Amazon.com
Verified Purchase
Lots of fun for all ages. Plenty of levels for hours of game play. I gave it 4 stars due to a couple of reasons. 1st - the game was not responding well in the first level when playing with Nova. Each time I used his powers the game would lag and stop for a few seconds at a time. This did not happen after level 1 was completed. I am also playing on an XBox One console. 2nd - it would be nice to go back and replay levels after you complete them. Unless I missed something, you have to delete your saved game and start all over.
Read more
One person found this helpful
Go to Amazon.com to see all 462 reviews 4.5 out of 5 stars
Free & fast delivery, movies and more with Amazon Prime
Prime members enjoy free & fast delivery, exclusive access to movies, TV shows, games, and more.
> Get started
Back to top
Get to Know Us
Connect with Us
Make Money with Us
Let Us Help You
© 1996-2020, Amazon.com, Inc. or its affiliates